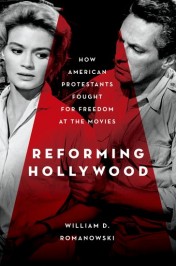 Reforming Hollywood: How American Protestants Fought for Freedom at the Movies

2014 is being heralded Hollywood’s “Year of the Bible.” The first film to reach theaters is Son of God, a remix of material by the same producers of the History Channel’s successful miniseries, The Bible.

It seems hardly a coincidence that Son of God opened on Ash Wednesday, ten years to the day after Mel Gibson’s The Passion of the Christ was released. The promotional campaigns for both movies relied less on broad market advertising in favor of creating grassroots awareness in religious circles. Reportedly, over half-a-million advance tickets were sold across the nation.

After a strong opening weekend of over $20 million however, box office fell by more than 50 percent, then dropped to just over $5 million in its third week of release. Unlike The Passion, which earned over $370 million domestically, Son of God looks destined for humbler commercial prospects.

A perennial problem for evangelical moviemakers is that their efforts to mass-market the Gospel have to please the palette of born-again moviegoers who, despite the movie’s evangelistic purpose, remain critical to the film’s commercial prospects. What distinguishes evangelical art from its secular counterpart is what I call its confessional character; to qualify as “Christian” a movie has to contain a clear presentation of the gospel message. Son of God certainly meets this criteria. The result however, is that movie ends up preaching to the proverbial choir.

What I find interesting is the way Son of God caters to the Christian faithful while also attempting to make the Messiah’s story appealing to nonbelievers. Movies have to rely on a common cultural cache—ideals, beliefs, attitudes, and assumptions—in order to connect with audiences. But the communicativeness of Son of God depends to a surprising extent on viewers having ample knowledge of the Christian Gospels.

The Son of God narrative lacks coherence and clumsily advances like a checklist of “the Messiah’s greatest hits,” as a Washington Post critic put it. Scenes are underdeveloped, but contain enough information to serve as prompts for those familiar with the Gospel accounts.

Consider Peter’s initial encounter with Jesus. As the scene unfolds, the lack of verisimilitude raises questions. Why would Peter, apparently an experienced fisherman, readily obey a complete stranger, set out, and cast his fishing nets again? And even after the astonishing catch, would Peter have not as much as a moment of hesitation when invited by the stranger to follow him? “What are we going to do?” he asks. “We are going to change the world,” Jesus replies. The cost of Christian discipleship is that simple.

However cryptic this encounter, there is just enough narrative information presented for a Christian viewer to “get” the significance of the scene by filling in any gaps with a mental flashforward: Peter, of course, is the rock upon which Jesus will build His church. Without such prior knowledge however, an uninformed viewer could easily find the scene contrived, puzzling, and even unbelievable.

Part of the power of this narrative viewpoint is that it shores up communal identity among the initiated who are aware that others won’t “get” these hidden meanings by virtue of being outsiders. To use a Biblical metaphor, the effect is akin to separating the sheep from the goats. The approach works as an extended metaphor with characters, like uniformed viewers, missing meanings to which only the faithful are privy.

During Pilate’s interrogation outside a prison cell, Jesus tells him, “My kingdom is not of this world.” On that line of dialogue, the Messiah’s head drops back and is engulfed in a ray of bright white light streaming down from above; the use of cinematography to make an all-too-obvious reference to Jesus’s “heavenly” kingdom. Before leaving, Pilate, looking perplexed, glances upwards at the light. The gesture is intended, I assume, to signify that the Roman prefect doesn’t “get” Jesus’s meaning (even if it looks more like he is wondering, as I was, about the mysterious light source in the otherwise dark dungeon). That Christian spectators do understand makes for a cinematic moment of solidarity.

Wrestling with the messianic character has been the raison d’etre of Jesus movies. The ascetic depiction of Christ in The Greatest Story Ever Told (1965) leans on the divine side; Jesus being tormented with fear, doubt, and sexual fantasies in The Last Temptation of Christ (1988) emphasizes the Messiah’s humanity. It is fair to expect any retelling of the Christ story to justify itself by offering a new perspective. The Son of God however, provides a straightforward, simplistic, and rather unimaginative version of the Christ story, representing Jesus as entirely free of any fear, temptation, reluctance, or uncertainty. In short, there is nothing thought-provoking about this movie’s treatment of God-become-flesh. (Although I do wonder why even the most reverent efforts ignore the prophet Isaiah’s description of the coming Messiah as having “no beauty that we should desire him” (53:2).)

Son of God is not meant to be great cinematic art. Apparently, the producers’ single-minded purpose is to provide a clear and unambiguous cinematic statement so that moviegoers “may believe that Jesus is the Messiah, the Son of God, and that by believing you may have life in his name” (John 20: 31). Unfortunately, this approach leaves much to be desired aesthetically and religiously. As the Washington Post critic observes, “Son of God is nothing if not sincere, its earnest retelling of Jesus’s life story resembling a gentle, pop-up book version of the New Testament, its text reenacted for maximum reassurance and intellectual ease.” Even a reviewer for the evangelical flagship magazine Christianity Today admits that “watching Son of God was not a dreadful experience, but it wasn’t a particularly inspirational or entertaining one, either.”

Others trace the film’s lack of originality to the merchandizing of The Bible miniseries, which is available on DVD now along with other inspired products. For that reason, Variety dubbed this theatrical spinoff “a cynical cash grab” and one religious reviewer took it to be more a “marketing ploy” than a movie.

Nevertheless, to the extent that Son of God was crafted as a matinee affirmation of the Christian faith, its success in that regard might well come at the expense of welcoming the uninitiated.

William Romanowski is Professor of Communication Arts and Sciences at Calvin College. His books include Eyes Wide Open: Looking for God in Popular Culture (a 2002 ECPA Gold Medallion Award Winner), Pop Culture Wars: Religion and the Role of Entertainment in America Life, and Reforming Hollywood: How American Protestants Fought for Freedom at the Movies. Read his previous blog posts.

Being Church as Christian hardcore punk