Of Sexual Irregularities, and Other Writings on Sexual Morality


In 1814, just two hundred years ago, the radical philosopher Jeremy Bentham (1748–1832) began to write on the subject of religion and sex, and thereby produced the first systematic defence of sexual liberty in the history of modern European thought. Bentham’s manuscripts have now been published for the first time in authoritative form. He pointed out that ‘regular’ sexual activity consisted in intercourse between one male and one female, within the confines of marriage, for the procreation of children. He identified the source of the view that only ‘regular’ or ‘natural’ sexual activity was morally acceptable in the Mosaic Law and in the teachings of the self-styled Apostle Paul. ‘Irregular’ sexual activity, on the other hand, had many variations: intercourse between one man and one woman, when neither of them were married, or when one of them was married, or when both of them were married, but not to each other; between two women; between two men; between one man and one woman but using parts of the body that did not lead to procreation; between a human being and an animal of another species; between a human being and an inanimate object; and between a living human and a dead one. In addition, there was the ‘solitary mode of sexual gratification’, and innumerable modes that involved more than two people. Bentham’s point was that, given that sexual gratification was for most people the most intense and the purest of all pleasures and that pleasure was a good thing (the only good thing in his view), and assuming that the activity was consensual, a massive amount of human happiness was being suppressed by preventing people, whether from the sanction of the law, religion, or public opinion, from engaging in such ‘irregular’ activities as suited their taste. 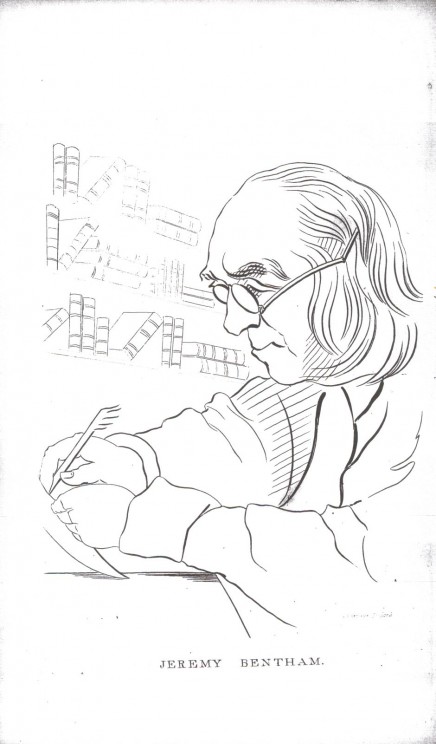 Bentham was writing at a time when homosexuals, those guilty of ‘the crime against nature’, were subject to the death penalty in England, and were in fact being executed at about the rate of two per year, and were vilified and ridiculed in the press and in literature. If an activity did not cause harm, Bentham had argued as early as the 1770s and 1780s, then it should not be subject to legal punishment, and had called for the decriminalization of homosexuality. By the mid-1810s he was prepared to link the problem not only with law, but with religion. The destruction of Sodom and Gomorrah was taken by ‘religionists’, as Bentham called religious believers, to prove that God had issued a universal condemnation of homosexuality. Bentham pointed out that what the Bible story condemned was gang rape. Paul’s injunctions against homosexuality were also taken to be authoritative by the Church. Bentham pointed out that not only did Jesus never condemn homosexuality, but that the Gospels presented evidence that Jesus engaged in sexual activity, and that he had his male lovers — the disciple whom he loved, traditionally said to be John, and the boy, probably a male prostitute, who remained with Jesus in the Garden of Gethsemane after all the disciples had fled (for a more detailed account see ‘Not Paul, but Jesus’).

Bentham was writing after Malthus had in 1798 put forward his argument that population growth would always tend to outstrip food supply, resulting in starvation and death until an equilibrium was restored, whereupon the process would recommence. Bentham had been convinced by Malthus, but Malthus’s solution to the problem, that people should abstain from sex, was not acceptable to him. He pointed out that one advantage of non-procreative sex was that it would not add to the increase of population. Bentham also took up the theme of infanticide. He had considerable sympathy for unmarried mothers who, because of social attitudes, were ostracized and had little choice but to become prostitutes, with the inevitable descent into drink, disease, and premature death. It would be far better, argued Bentham, to destroy the child, rather than the woman. Moreover, it was kinder to kill an infant at birth than allow it to live a life of pain and suffering.

Bentham looked to ancient Greece and Rome, where certain forms of homosexual activity were not only permitted but regarded as normal, as more appropriate models for sexual morality than that which existed in modern Christian Europe. Bentham attacked the notion, still propagated by religious apologists, that homosexuality was ‘unnatural’. All that ‘unnatural’ meant, argued Bentham, was ‘not common’. The fact that something was not common was not a ground for condemning it. Neither was the fact that something was not to your taste. It was a form of tyranny to say that, because you did not like to do a particular thing, you were going to punish another person for doing it. Because you thought something was ‘disgusting’ did not mean that everyone else thought it was disgusting. You might not want to have sex with a sow, but the father of her piglets thought differently.

These writings were, for Bentham, a critical part of a much broader attack on religion and the ‘gloomy terrors’ inspired by the religious mentality. By putting forward the case for sexual liberty, he was undermining religion in one of the areas where, in his view, it was most pernicious. Bentham did not dare publish this material. He believed that his reputation would have been ruined had he done so. He died in 1832. He would have been saddened that it still retains massive relevance in today’s world.

Philip Schofield is Professor of the History of Legal and Political Thought in the Faculty of Laws, University College London, Director of the Bentham Project, and General Editor of the new authoritative edition of The Collected Works of Jeremy Bentham. The latest volume in the edition, Of Sexual Irregularities, and other writings on Sexual Morality, was published on 30 January 2014. The research that led to the preparation of the volume was funded by the Leverhulme Trust. The Bentham Project is responsible for Transcribe Bentham, the prize-winning scholarly crowdsourcing initiative, where volunteers transcribe previously unread Bentham manuscripts.