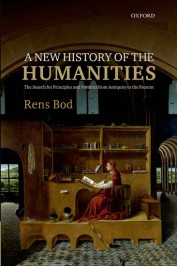 A New History of the Humanities

Many histories of science have been written, but A New History of the Humanities offers the first overarching history of the humanities from Antiquity to the present. There are already historical studies of musicology, logic, art history, linguistics, and historiography, but this volume gathers these, and many other humanities disciplines, into a single coherent account

Have insights from the humanities ever led to breakthroughs, or is any interpretation of a text, painting, musical piece, or historical event as good as any other? I have long been fascinated with this question. To be sure, insights from the humanities have had an impact on society. Yet even this observation may come as a surprise, since humanities disciplines like philology, art history, musicology, literary studies, and theatre studies are usually seen as a luxury pastime which is of little use to society and even less to the economy. Arguments in favour of the humanities usually emphasize their importance for critical thinking, historical consciousness and for creating competent democratic citizens. While these arguments may all be true, a quick glance at the history of the humanities shows a rather different picture. In all periods, humanists have made discoveries that literally changed our world, for better and worse. As if humanities scholars have no clue of their own history, these discoveries have even been attributed to the sciences.

In the fifteenth century, when the humanities were called studia humanitatis, the Italian philologist Lorenzo Valla showed by meticulous lexical and stylistic analysis that the document known as the “Donation of Constantine” was a mediaeval fake. In this document it was stated that the Roman emperor Constantine the Great had donated the Western Roman Empire to Pope Sylvester I out of gratitude for Constantine’s miraculous recovery from leprosy. But when Valla showed that the document could impossibly have been written in the time of Constantine, the papal claim to worldly power appeared suddenly to be based on fiction, a result which was vehemently taken up by the church reformer Martin Luther. Thanks to Valla’s philological innovation, one individual could now wipe the floor with a document that had been deemed unimpeachable for centuries.

In the early seventeenth century the historian Joseph Scaliger tried to reconcile the divergent chronological systems of different peoples. When he arrived at Egyptian history, Scaliger was able to date the beginning of the first Egyptian dynasty to 5285 BCE. To his dismay this date was nearly 1,300 years before the generally accepted date of Creation, which according to biblical chronology had to be around 4000 BCE.  Although Scaliger tried to save the Bible by placing the early pharaohs into a hypothetical period which he called ‘proleptic time’, his result led to fierce biblical criticism that ushered in the early Enlightenment with Spinoza among its most famous exponents.

A more recent humanistic breakthrough is the discovery that virtually all languages in Europe and Asia are related via precise sound shift rules that govern phonological changes over time. The linguist August Schleicher argued that this result pointed at a large language family that had evolved from an original proto-language called proto-Indo-European. This triggered the hypothesis of the existence of a ‘pure’ Aryan race, a view which was eagerly adopted and abused by the National Socialists. Thus the impact of the humanities, like that of the sciences, is not necessarily positive. The claim that the humanities are important for democracy and for developing critical citizens, as put forward by Martha Nussbaum, thus deserves a more nuanced discussion.

Humanistic insights and discoveries have also led to scientific and even technological breakthroughs. When Leon Battista Alberti gave the first description of linear perspective in 15th century Florentine painting, it not only (literally) changed our view of the world but it also led to revolutionary architectural design techniques. And when the 19th-century scholar Karl Lachmann used the model of a tree of texts with a common root for his textual reconstructions, he also gave biologists a powerful method for describing zoological phylogenies.

Perhaps the insight from the humanities with the most impressive impact on science and technology occurred in the study of language. When in the late 1950s linguists like Noam Chomsky developed a notation for defining grammars, it was immediately taken up by computer scientists such as John Backus who applied this notation to designing programming languages. Chomsky’s syntactic definition of a language served as the pattern for the structure of the whole compiler for ALGOL — the first higher programming language. Thus the development of modern programming languages was initiated through linguistic work. This unexpected application of the study of language is rarely if ever mentioned in the historiography of linguistics while it is widely acknowledged in (the history of) computer science.

The disregard of these kinds of utilizations of humanistic insights is symptomatic for the humanities. While applications of humanistic methods in other fields may not be the core business of the humanities, the underlying insights that led to these applications are. In their critical investigations of texts, languages, art and music, humanists have revealed patterns and theories that led to new and unforeseen utilizations. A profound awareness of the general history of the humanities can guard us against the misconception that the humanities only deal with attributing ‘value’, developing a critical and aesthetical mind, or creating historical consciousness.

Sadly modern humanists often believe that they are moving towards science when they use an empirical approach in studying texts, art, music, or the past. They are mistaken. Scholars using empirical methods are returning to their roots in the 15th-century studia humanitatis when the empirical approach was invented — and not since disappeared.

Rens Bod is a professor of humanities at the University of Amsterdam. His latest book is A New History of the Humanities: The Search for Principles and Patterns from Antiquity to the Present.