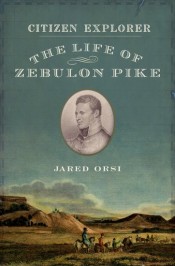 Today marks the anniversary of an event little remembered but well worth noting.

On 15 November 1806, Lieutenant Zebulon Pike paused on the high plains in what is now Colorado, peered through his spyglass, and saw the mountain that would later bear his name, Pikes Peak.

A contemporary of Lewis and Clark, Pike commanded a US military expedition that was exploring the southwestern reaches of the Louisiana Purchase. Believing a view from the summit would disclose the geography of the surrounding region, he decided to climb it.

On the 17th, Pike wrote that the party “pushed with an idea of arriving at the mountains, but found at night, no visible difference in their appearance.” The men marched for a week, and then on the 24th, he departed with three men “with an idea of arriving at the foot of the mountain.” They camped that night on the prairie, still miles from its base.

Distance had fooled him. American geographers had never seen the Rocky Mountains but most believed them to be about the size of more familiar eastern ranges. On first seeing them rise over the horizon, Pike compared them to the Alleghenies.

Supposing them to be much smaller than they were, he also assumed they were closer. The possibility of seeing a mountain more than a hundred miles away was not something he could wrap his eastern mind around.

On the 26th, once again expecting to ascend the peak that day, he cached his food and blankets. For all of the ten hours of daylight the sun gave them, he and his comrades labored.

They hiked up drainages and contoured hillsides. Sometimes, Pike wrote, the rocks were “almost perpendicular.” By late afternoon, as the last rays of sun melted behind the mountains, the party came to a steep incline.

The peak had remained hidden from view all day, blocked by intervening lesser summits. Perhaps to get a look at the terrain that separated them from their objective, they started up the slope, toward a pinnacle that appeared to be the highest in the vicinity.

For thirty or forty minutes they battled the mountain, clawing up a sheer face by grasping with weary limbs the jagged edges of boulders and the branches of fallen trees.

Finally, they found a cave, a crevice really, just big enough for four tired, hungry men without blankets. With daylight waning and the temperature falling, they crowded into this rocky hostel and shared body heat while they tossed and wriggled all night, seeking a comfortable surface to permit sleep.

They awoke the next morning, Thanksgiving Day, to a sublime view. Clouds overhung the endless prairies stretching out to the east, while the sky above was clear and blue.

They hiked more easily at first, reaching the shoulder of the mountain in a few minutes and then walking a half-hour along the ridgeline toward the cone of the peak. Then it was back to boulder scrambling and hoisting themselves by crags and branches, soon in waist-deep snow.

Another half hour brought them to the top and a 360-degree view that revealed a sight both awesome and dispiriting.

“The Grand Peak,” Pike recorded, “now appeared at the distance of 15 or 16 miles from us, and as high again as what we had ascended, and would have taken a whole day’s march to have arrived at its base, when I believe no human being could have ascended to its pinical.”

Coloradans delight in claiming that Pike thought the peak would never be climbed. Well-fed modern hikers enjoying the benefits of plastic, nylon, Thinsulate, and Gortex have had little difficulty accomplishing what Pike could not.

But Pike meant only that the summit could not be reached under the circumstances. That is, men who had not eaten in thirty-some hours and who lacked the provisions to bear another day in the wilderness could not climb it.

He made this context clear by adding, “The condition of my soldiers who had only light overalls on, and no stockings…, the bad prospect of killing any thing to subsist on, with the further detention of two or three days, which it must occasion, determined us to return.”

Although the Grand Peak defeated him, he and his expedition continued. Pike’s maps and journals would one day guide Santa Fe Trail traders and Rocky Mountain fur trappers. First, however, he regathered his men and led them into the mountains by another route. It was “snowing very fast.” “The hardships…had now began.”

Jared Orsi is Associate Professor of History at Colorado State University. He is the author of Citizen Explorer: The Life of Zebulon Pike and the prizing-winning Hazardous Metropolis: Flooding and Urban Ecology in Los Angeles.