By Maoyong Fan and Yanhong Jin

The prevalence of childhood obesity in the United States has risen dramatically across all racial, gender, and ethnic groups since 1980. Approximately three out of ten children and adolescents in the United States are overweight or obese. Compared with normal-weight children, obese children are at a higher risk for chronic diseases such as cardiovascular diseases, bone and joint abnormalities, and sleep apnea. Furthermore, obesity imposes adverse effects on cognitive, social, and psychological development in children and has long lasting negative impacts on adult health, employment, and socioeconomic status. Stopping and reversing the childhood obesity epidemic requires promoting active lifestyle and increasing energy expenditure. Parks and playgrounds are important places for children to engage in physical activity. We evaluated the effect of neighborhood parks and playgrounds on childhood obesity by examining their effects on body mass index (BMI) and the risk of being overweight or obese, using the 2007 National Survey of Children’s Health. 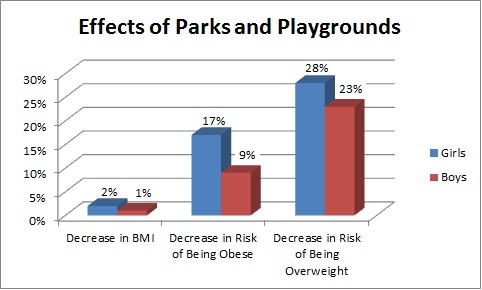 We find that park/playground effects vary across demographic segments. For example, these effects are more pronounced for non-Hispanic white children than for black and Hispanic children. At the same time, we also find that the effects for children in low-income households are larger than for those children in high-income households. These findings have important implications in light of the fact that obesity rates are much higher among Hispanic and black children than non-Hispanic white children and among low-income children than high-income children. The results suggest the need to better understand social, cultural, and other factors that may presently be limiting physical activity through use of neighborhood recreation facilities. 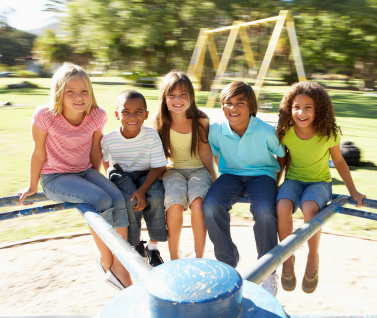 The results in this study suggest that improving a neighborhood’s built environment through the addition or maintenance of parks and playgrounds is an effective strategy for combating childhood obesity. Such policy interventions must consider the socioeconomic status of the targeted children as well as other neighborhood amenities.

Maoyong Fan and Yanhong Jin are the authors of “Do Neighborhood Parks and Playgrounds Reduce Childhood Obesity?” (available to read for free for a limited time) in the American Journal of Agricultural Economics. Maoyong Fan is an Assistant Professor of Economics at Ball State University, whose current research interests include economics of obesity and environment and health. Yanhong Jin is an Associate Professor of Agriculture, Food and Resource Economics at Rutgers University, whose current research interests include food and health economics.

The American Journal of Agricultural Economics provides a forum for creative and scholarly work on the economics of agriculture and food, natural resources and the environment, and rural and community development throughout the world. Papers should relate to one of these areas, should have a problem orientation, and should demonstrate originality and innovation in analysis, methods, or application.