“Carnival time is over,” the newly-elected Pope Francis is reported to have said when he was offered an ermine-trimmed mozzetta such as most of his predecessors had worn round their shoulders during the winter season. He may not have been alluding to the thirteen-day sede vacante which had just reached its much-anticipated conclusion, but it does seem fair to say that this papal interregnum was arguably the jolliest on record. Previous interregna included a period of mourning before the cardinals entered the conclave; this one made history precisely because it didn’t. That did much to lighten the atmosphere. 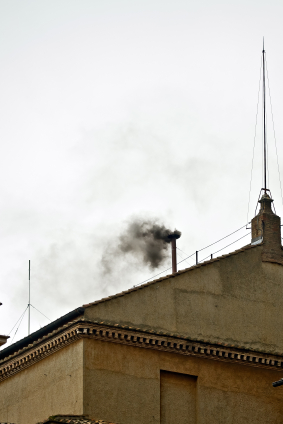 In 2005, after the death of John Paul II, interest in the ensuing conclave did not seem to extend much beyond predicting — presumably for gambling purposes — who would be elected. The procedures of the conclave were explained for the benefit of the wider public, but opportunities to bring the entire experience to life with reference to what is known of past conclaves were rarely, if ever, taken. In some quarters there might still be an assumption that the history of conclaves must be a subject dry enough to rival Stubbs on Archbishop Stigand, but the greater variety of media platforms created during the last eight years has allowed a little more conclave history to trickle out this time round. We have also seen some splendid online graphics illustrating the balloting process as it currently exists, complete with cartoon cardinals waddling up penguin-like to cast their votes.

It would be interesting to know whether any broadcasters amended their schedules in the last few weeks in order to screen cinematic accounts of past conclaves: the nearest that most of us will ever get to the real thing. In 2002 the streets of Rome were deserted when RAI broadcast the John XXIII biopic Papa Giovanni, starring the American Edward Asner in the title role. In that production much attention is devoted to the reading of the ballot papers, with the number of votes for Cardinal Roncalli increasing scrutiny by scrutiny. When Cardinal Seán Brady spoke of his reaction at hearing the name “Bergoglio” read out time after time, it brought to mind the conclave scenes in Papa Giovanni. One feature of conclaves that has not survived since Pope John’s election in 1958 is the practice of cardinals — as collective rulers of the Church in the absence of a papal monarch — sitting beneath baldacchini which they cause to collapse when the new pope is elected. That particular carnival is well and truly over, but it is certainly instructive to see it on screen.

As conclave films go, rather more fanciful is The Conclave (2006), a loose dramatisation of Pius II’s account of his own election in 1458, twisted in order to feature Rodrigo Borgia, the most junior cardinal deacon, in scenes far removed from ecclesiastical politics. Pius’s unparalleled memoirs are as rich in inside information as they are overtly hostile towards his French counterparts. There is, however, something deeply unconvincing about the casting of Brian Blessed as Enea Silvio Piccolomini. Let’s settle for his beard as the source of the problem. Clerical beards deserve a blog post all of their own, and would doubtless have received one had the Capuchin Seán O’Malley been elected last week. In the fifteenth century the beard that mattered was that of the Greek cardinal Bessarion who, as Pope Pius relates, quite literally came within a whisker of being elected in 1455, until the Breton cardinal Alain de Coëtivy urged his fellow electors not to entrust the Latin Church to a man whose facial hair suggested that he was an easterner at heart. Bessarion is one of the lesser characters in The Conclave, the very existence of which suggests that we shall never see the conclave of 1455 depicted in film.

As far as we non-cardinals are aware, the most dramatic conclave of the modern period was that of 1903, when the Austrian veto was pronounced against Cardinal Rampolla, whose votes steadily declined while the name “Sarto” was read out with increasing frequency. That might well have cinematic potential, but at least it seems to have inspired the novel Hadrian VII, which was published the following year. Had this month’s conclave lasted any longer than it did there might have been serious anxiety in many a Catholic household, as clerics and laymen alike suspected they might be about to experience their Corvo moment. Productions of Peter Luke’s play of the novel allow us to revel in a stage full of cardinals.

The dramatic impact of Pope Benedict’s helicopter flight into the sunset is not something that could be repeated with anything like the same effect. Indeed, in the light of recent events, papal resignations now look like becoming the norm, with papal elections therefore becoming less of a surprise and more matter-of-fact. After decades of inertia in the Vatican, Pope Francis probably needs to be a pontiff in a hurry and, thus far, is proving to be precisely that. If his simplifying agenda extends to papal elections, perhaps we shall have all the more need of fictional conclaves to illustrate what we have lost.

Stella Fletcher was a founding editorial board member of Oxford Bibliographies in Renaissance and Reformation, and has made a number of contributions, including Cardinals. Her publications include Princes of the Church: a history of the English cardinals (2001) and Roscoe and Italy (2012). She is honorary secretary of the Ecclesiastical History Society, of which she has also written ‘A Very AgreeableSociety’: The Ecclesiastical History Society, 1961-2011.

Subscribe to the OUPblog via email or RSS.
Subscribe to only religion articles on the OUPblog via email or RSS.
Image credit: Vatican, Vatican City State – March 13, 2013: Black smoke emerges from the chimney of the Sistine Chapel in St. Peter’s Square at the Vatican after the cardinal vote for a new pope. Black smoke indicates that no pope was elected. It is the second day of the conclave to elect a pope. Photo by omada, iStockphoto.