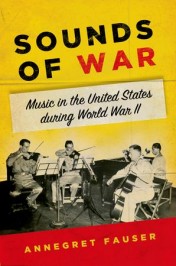 Sounds of War: Music in the United States during World War II

When politicians attempt to capture a unifying moment, they often choose the music of Aaron Copland. Why? Classical music in 1940s America had a ubiquitous cultural presence at time when national identity consolidated. Drawing on music history, aesthetics, reception history, and cultural history, Sounds of War recreates the remarkable sonic landscape of the World War II era. We present a brief excerpt of the forthcoming book below.

Music also played its role. Whether as an instrument of blatant propaganda or as a means of entertainment, recuperation, and uplift, music pervaded homes and concert halls, army camps and government buildings, hospitals and factories. A medium both permeable and malleable, music was appropriated for numerous war-related tasks. Indeed, even more than movies, posters, books, and newspapers, music sounded everywhere in this war, not only in its live manifestations but also through recording and radio. So far as the U.S. is concerned, even today, musicians such as Dinah Shore, Duke Ellington, and the Andrew Sisters populate the sonic imaginary of wartime. Whether performed by “all-girl” groups such as the International Sweethearts of Rhythm or by military bands conducted by Glenn Miller and Artie Shaw, swing and boogie-woogie entertained civilians at home and G.I.s stationed abroad. Numerous films created to boost both civilian and military morale—from Star Spangled Rhythm (1942) and Stage Door Canteen (1943) to Anchors Aweigh (1945)—featured star-studded numbers presenting country sounds, barbershop quartets, swing, sentimental ballads, and hot jazz, among others. Likewise, nostalgic songs such as “I’ll Be Seeing You” (1938) and belligerent tunes as “Praise the Lord and Pass the Ammunition” (1942) had their place on popular radio programs, USO shows and V-Discs.

Star Spangled Rhythm, for example, brings together all the popular styles well known for this period, and indeed often regarded as iconic for it. However, it does so in what might sometimes seem surprising ways, if with obvious programmatic intent. The big production number “Swing Shift,” set in an aircraft factory, combines jazzy swing with traditional barn dances, musical and dance styles that might otherwise have been hailed as incompatible. Another number merges the style and performance of the African American Golden Gate Quartet with the more sentimental duet “Hit the Road to Dreamland” (marked as “white” by both its performance style and its crooning arrangement) performed by Mary Martin and Dick Powell. Hot jazz is represented, inevitably, by a Harlem street scene featuring the star African American dancer Katherine Dunham. And equally inevitably, the film ends with a patriotic number, “Old Glory,” where Bing Crosby, at the head of a crowd before a stage-set Mount Rushmore, sings in praise of the U.S. flag, engages with a Doubting Thomas, and leads representatives of the states (including a gospel group for Georgia) into a choral hymn of patriotic solidarity.

Yet that final number has still more surprises to offer given its obvious, and no doubt deliberate, echoes of another well-known patriotic piece, John La Touche and Earl Robinson’s Ballad for Americans (1939). Here we move from “popular music” in the direction of a repertory that was, and is, often labeled “classical.” I use that term with all due caution—and mostly for the lack of anything better—without asserting value judgments on its superiority over other musical forms and acts, nor limiting my inquiry to elitist “highbrow” domains: indeed, one of my points is that wartime classical music is not at all highbrow—just as popular music is not lowbrow—but does its cultural work in differently configured social spheres. However, for all the scholarly emphasis on popular culture in the wartime period, what in fact distinguished musical life in the U.S. during World War II from other times of war was the significant role assigned to classical music: in 1940s America it had a cultural relevance and ubiquity that is hard to imagine today.

The out-and-out involvement of the entire nation into the war meant that all music was to serve in its needs, and that also included types of music that had already gained a significantly broader presence in U.S. culture during the 1930s. This new prominence was achieved in New Deal America—and we shall see how New Deal institutions transferred to wartime ones—especially through music appreciation courses in schools and colleges, nationwide radio broadcasts of major orchestras and the Metropolitan Opera House, and gramophone catalogues that offered a repertoire of classics for the middlebrow household. Through these educational and marketing initiatives, classical music from symphonies to Schubert songs carried added value as cultural capital moving beyond popular musical entertainment. Also at stake, however, was the U.S.’s role not just as a military power, but also as a force for civilization. In composer Henry Cowell’s words, musicians of all stripes were “shaping music for total war.” Indeed, no other period in U.S. history mobilized and instrumentalized culture in general, and music in particular, so totally, so consciously, and so unequivocally as World War II.

Musicians—whether a singing cowboy such as Gene Autry or an opera singer such as John Carter from the Met—saw themselves as cultural combatants. Aaron Copland, for example, was just one of many classical composers deeply involved in the war effort. Marc Blitzstein, Elliott Carter, Henry Cowell, Roy Harris, and Colin McPhee all participated in the propaganda missions of the Office of War Information (OWI). Earlier, in summer 1942, Blitzstein had become attached to the Eighth Army Air Force in London where he was commissioned to compose his Airborne Symphony. Samuel Barber also served in the Army Air Force (but stationed in the U.S.), writing both his Second Symphony and his Capricorn Concerto, “a rather tooting piece, with flute, oboe and trumpet chirping away” and thus fi t for the times, as he assured Copland.5 Civilian commissions for new music focused on patriotic and “martial” subjects, most famously the series of fanfares that Eugene Goossens, the chief conductor of the Cincinnati Symphony Orchestra, requested from American composers and from European musicians in exile: Copland’s Fanfare for the Common Man is a still much performed result. Similarly, the League of Composers (financed by the Treasury Department) commissioned seventeen works on patriotic themes, including Bohuslav Martinů’s Memorial to Lidice and William Grant Still’s In Memoriam: The Colored Soldiers Who Died for Democracy. Classical music was heard on the radio and in film scores, whether Yehudi Menuhin playing Schubert’s Ave Maria in Stage Door Canteen or Victor Young infusing the entire score for Frenchman’s Creek (1944) with Claude Debussy’s Clair de lune. Concert music was performed in the Armed Forces, for example by the Camp Lee Symphony Orchestra or the U.S. Navy Band String Quartet; and it even played a role in the work of the Office of Strategic Services (the predecessor to the CIA), whose director, General “Wild Bill” Donovan, was known not only to support experiments in using music as cipher code, but also to involve himself in music-related propaganda efforts.

Annegret Fauser is Professor of Music and Adjunct Professor of Women's Studies at the University of North Carolina-Chapel Hill. She is author of Sounds of War: Music in the United States during World War II and Musical Encounters at the 1889 Paris World's Fair and co-editor of Music, Theater and Cultural Transfer: Paris 1813-1914.