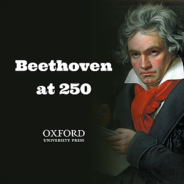 To celebrate 250 years since Beethoven’s birth, we’ve pulled together new and notable content across all of our products—from academic books to reference works to journal articles—to offer a wide range of perspectives on one of the most admired composers in the history of Western music.

At a pre-COVID live performance of one of Ludwig van Beethoven’s cello sonatas, I was in the front row and had a great view of the musicians. Beethoven was watching, too, in the form of a scowling bust at the back of the stage. And the two just didn’t match. The music was playful and jesting, but Beethoven looked deeply unhappy. It struck me at that moment that the assumption of composers expressing themselves in their music was not as straightforward as it is often taken to be.

The Beethoven Syndrome is my name for the inclination of listeners to hear music—particularly instrumental music—as the projection of a composer’s innermost self. It’s a common response. People often hear Beethoven’s music as a kind of sonic diary, as a soundtrack of his own life, so to speak. But that’s not how his contemporaries heard it. They knew very little about him as a person, and it was only after his death that they began hearing his music as an outpouring of his soul. Yet by 1850, just a few decades after his death, audiences were hearing not just Beethoven’s music but pretty much all instrumental music by any composer as a form of autobiography.

Why was that? Why did listening habits change so radically in the years around 1830?

A big part of the answer had to do with changing concepts of expression. During the lifetimes of Joseph Haydn, Wolfgang Amadeus Mozart, and Beethoven, listeners and composers alike thought of expression as the representation of emotions, not as the revelation of the composer’s personal feelings. Music was regarded as a rhetorical art: It was the responsibility of composers to create works that listeners could follow and that would move those listeners emotionally. Haydn and Mozart didn’t want to puzzle their audiences. They made unusual moves in their music from time to time, but they didn’t want to write in a way that left people scratching their heads and wondering what that was all about?

In this sense, listeners of that time regarded composers more in the way we think of actors today: They inhabit their roles and portray them convincingly and with ease. What distinguishes great actors from character actors, after all, is that the great ones can take on a wide variety of roles, while the lesser ones are limited in their range. Beethoven was a great actor. This doesn’t mean he was insincere. It means that he could enter into—and convincingly portray—a great many facets of the human condition.

The fact is that Beethoven had an amazing ability to step outside himself. And that was something his contemporaries valued. One reviewer from the time proudly called him “Our Proteus,” comparing him to that shapeshifting figure of Greek mythology. That’s one of the reasons why the music that doesn’t fit the later image of Beethoven as the scowling, storming Titan falls by the wayside. Too often it’s perceived as not being the real Beethoven.

Why did Beethoven write particular pieces the way he did? It was long assumed—but again, only after his death—that the “Moonlight” Sonata, op. 27, no. 2, was his response to a passionate love affair (of which Beethoven had quite a few). And maybe it was. It’s easy to map this onto the piece, with its brooding first movement and turbulent finale. But then how do we explain its companion piece published alongside it, the Piano Sonata op. 27, no. 1, which conveys a completely different mood?

The Fifth and Sixth Symphonies offer another good case in point: Beethoven wrote them at more or less the same time, yet it’s hard to imagine two more different symphonies. Early audiences, moreover, heard the “Pastoral” Symphony as a depiction of nature while later ones heard it as Beethoven’s response to nature.

From Hector Berlioz onward, it became standard practice to hear the music of all composers, not just Beethoven, as a form of autobiography. Berlioz’s Symphonie fantastique, premiered in 1830, three years after Beethoven’s death, wears its autobiographical heart on its sleeve. And audiences were grateful for the prose program Berlioz issued with the work, because it provided them a decoder ring of sorts, a way into this very strange new symphony. Listeners might or might not like the work, but they could now hear it as its composer’s way of expressing himself.

This was a new way of composing and a new way of listening. Listeners embraced the idea of music as autobiography because it gave them something to hang on to. And composers liked it as well: it helped make their life story part of their marketing appeal. Composer biographies became all the rage. It’s hard to imagine, but there were no biographies of Haydn, Mozart, or Beethoven until after they had died. But those biographies soon became an important key for unlocking the apparent meaning of their music. In fact, it’s in the middle of the nineteenth century that the whole industry of music appreciation really gets rolling. Journals start publishing accounts of new works and their living composers, which sends the message: “Listen for this. This is how you can understand what you’re hearing.”

What’s really interesting is that modernist composers of the early twentieth century like Arnold Schoenberg, Igor Stravinsky, and Claude Debussy began to distance themselves from the idea of self-expression. Musical expression, they maintained, was objective, and the “New Objectivity” that was all the rage in the 1920s and 30s proved foundational for the mid-century modernism of composers like John Cage, Milton Babbitt, and Elliott Carter. In recent decades, at least some composers (the “New Romantics” or “Postmodernists” as they’re sometimes called) have been more willing to promote their music as an expression of their experiences and of their inner selves. Plus ça change….

Mark Evan Bonds is the Cary C. Boshamer Distinguished Professor of Music at the University of North Carolina at Chapel Hill, where he has taught since 1992. He has served as editor-in-chief of Beethoven Forum and has published widely on music, aesthetics, and the philosophy of music.He is the author of The Beethoven Syndrome: Hearing Music as Autobiography and Beethoven: Variations on a Life.