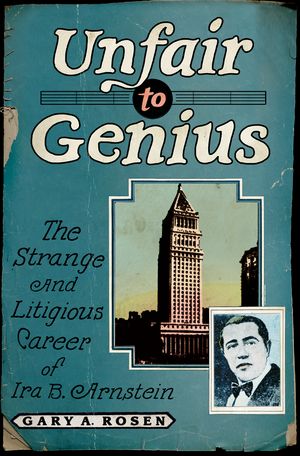 Unfair to Genius: The Strange and Litigious Career of Ira B. Arnstein

From the 1920s to the 1950s, Ira B. Arnstein was the unrivaled king of music copyright litigants. He spent the better part of those 30 years trying to prove that many of the biggest hits of the Golden Age of American Popular Song were plagiarized from his turn-of-the-century parlor piano pieces and Yiddish songs. “I suppose we have to take the bad with the good in our system which gives everyone their day in court,” Irving Berlin once said, but “Arnstein is stretching his day into a lifetime.”

Arnstein never won a case, but he left an enduring imprint on copyright law merely by getting his days in court and establishing precedents that later led to copyright infringement judgments against such notables as George Harrison and Michael Bolton. Though his claims often strained judicial credulity, Arnstein had a gift for posing conundrums that engaged some of the finest legal minds of his era, forcing them to refine and sharpen their doctrines.

Over the years, Arnstein laid claim to more than a hundred standards of the Great American Songbook. This playlist of 15 songs — from Irving Berlin’s “A Russian Lullaby” of 1927 to Cole Porter’s “I Love Paris” of 1952 — is representative, and we have selected recordings that illustrate performance styles from the 20s to today. “No one,” as one lawyer wrote and you will agree, “can accuse Arnstein of courting feeble opposition.”

Gary A. Rosen is the author of Unfair to Genius: The Strange and Litigious Career of Ira B. Arnstein. He has practiced intellectual property law for more than 25 years. Before entering private practice, he served as a law clerk to federal appellate judge and award-winning legal historian A. Leon Higginbotham, Jr.

Making music American: a playlist from 1917