For some time I have fought a trench war, trying to prove that fowl and fly are not connected. The pictures of an emu and an ostrich appended to the original post were expected to clinch the argument, but nothing worked. A few days ago, I saw a rafter of turkeys strutting leisurely along a busy street. Passersby were looking on with amused glee while drivers honked. The birds (clearly, “fowl”) crossed the road without showing the slightest signs of excitement (apparently, after Thanksgiving they had nothing to worry about), though two or three accelerated their pace somewhat. Not a single one flew. This convinced me that my theory was correct, and I decided to stay for a while in the avian kingdom; hence lark.

One of the Old English forms of lark was læwerce (with long æ), later laferce. Its West Germanic (Frisian, Dutch, and German) cognates resemble læwerce more or less closely. Modern Scots laverock and Dutch leeuwerik,* unlike Engl. lark and German Lerche, have retained more flesh. The contraction of læwerce to lark should cause no surprise, because v from f was regularly lost between vowels: for example, head goes back to heafod, and hawk to hafoc.  The protoform of lark must have sounded approximately like laiwazakon (-on is an ending). Obviously, such a long word must either have been a compound or made up of a root and a suffix. Attempts to discover two meaningful elements in laiwazakon began with our first English etymologist John Minsheu (1617). He detected leef–werck “life work” in lark, “because this bird flies seven sundrie times every day very high, so sings hymnes and songs to the Creator, in which consists the lives worke.” No one has ever repeated this etymology. But the search for the elements in the allegedly disguised compound continued.

Old (and Modern) Icelandic lævirki “lark” provided the greatest temptation. The word falls into two parts: læ– “treason, deceit” and virki “work.” It is not quite clear whether the Scandinavians borrowed their name of the lark from the south or whether we are dealing with a genuine cognate. In any case, lævirki is transparent. Unfortunately, too transparent, and it is surprising that Skeat let himself be seduced by such a hoax. He suggested that, according to some unknown superstition, the lark might be a bird of ill omen or, conversely, a revealer of treachery. The OED followed Skeat with a few minor modifications, and Skeat ended up with the tentative gloss lark “skillful worker, or worker of craft” (because læ sometimes meant “craft”; however, it hardly ever lacked the connotations of wiles). I think the time has come to forget it. Icelandic lævirki is the product of folk etymology: an opaque word acquired a deceptively clear shape (compare Engl. asparagus becoming sparrow grass, though everybody knows that sparrows are not herbivorous creatures). Dutch leeuwerk begins with leeuw “lion,” but no one would reconstruct a lost story in which a lark entertained a lion with its songs. 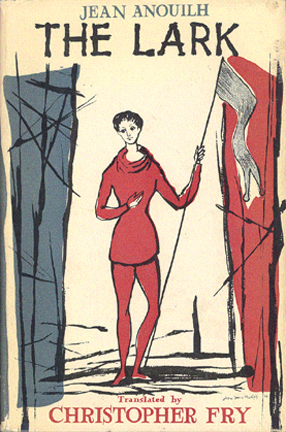 Two features of the lark are especially noticeable to humans: it is an early bird (whence its association with daybreak), and its songs (trills) are loud and melodious (after reading this post, listen to the recordings of Glinka-Balakirev’s “The Lark,” a set of beautiful variations). Quite naturally, most etymologists tried to find reference to morning or sound in the Germanic word. As early as 1846, Wilhelm Wackernagel, a famous philologist, believed that the old form consisted of lais– “furrow” and “waker”; the lark, he said, alerted the plowman that morning arrived and work should begin. Lais– would have been a cognate of Latin lira “furrow” (long i) and Engl. last (literally, “track”), as in cobbler’s last. This etymology was mentioned in a few old dictionaries and rejected, but it has found an enthusiastic modern supporter. The only non-controversial part of the reconstructed form laiwaza-k-on is –k-, a common suffix in animal and bird names. The part –aza– remains obscure; it has been called another suffix, but its meaning has not been discovered. I will skip several fanciful suggestions in which the poor lark lost a good deal of its plumage, and mention only one, because it belongs to an excellent scholar. In Sanskrit, the root lu– enters into many words meaning “cut.” Therefore, it has been proposed that the lark got its name from the habit of pecking at grains — an uninviting idea.

I can now come to the point. In lai– most researchers recognize a sound imitative complex. Last week, while discussing lollygag, I touched on the complex lal- ~ lol- ~ lul- ~ lil-. Among other things, it often refers to sound.  Here we find such different words as Russian lai “barking,” Engl. lullaby, Engl. ululate “howl” (from French, from Latin), Engl. hoopla (from French), and a host of others. It matters little whether the lark’s call resembles la-la-la; in this situation, anything goes. Most dictionaries, unless they say “origin unknown (uncertain),” state that, although the etymology of lark is debatable, the word is onomatopoeic. Some authors add certainly and undoubtedly to their statements. Perhaps lark is indeed an onomatopoeia (la certainly and undoubtedly suggests sound imitation), but the problem of its ultimate origin remains.

The Latin for lark is alauda, and the Romans knew that their word was Gaulish (Celtic). Alauda and laiwazakon do not look like perfect congeners, but they are close enough to invite speculation about their affinity. The Latin noun (speciously) contains the root of laudare “praise” (compare Engl. laud, laudable, laudatory, and so forth), and this fact must have suggested to Minsheu the idea of the lark’s praising the Creator. The best nineteenth-century etymologists were puzzled by the similarity between læwerce and its kin and alauda. Jacob Grimm and Lorenz Diefenbach saw no serious arguments against uniting them, while their younger contemporaries showed some restraint. (Diefenbach’s name will mean nothing to non-specialists, but he was one of the greatest philologists of his generation.) Long ago — my reference takes me to 1887 — Moritz Heyne brought out volume six of the Grimms’ Dictionary and suggested that the hopelessly obscure word for “lark” had been borrowed from some other language. If we accept this hypothesis, the form in both Celtic and Germanic will emerge as an adaptation of the etymon we have no chance of finding. In recent years, the idea of the substrate has been much abused. Numerous words of unclear etymology have been given short shrift and assigned to some pre-Indo-European language of Europe. But the name of the lark does look like a loan from a lost source, for the etymology of Latin alauda is as impenetrable as that of laiwazakon.

Reference to the substrate leaves some phonetic details unexplained. Also, we will never know why the new inhabitants of Europe had no native name for such a widespread bird and how exactly the original word sounded. But perhaps we can risk the conclusion that lark is neither a Celtic nor a Germanic word (so that it cannot be represented as a compound made up of two Germanic roots) and that it probably contains an onomatopoeic element. This is a familiar denouement: the sought-for answer escapes us, but we seem to be closer to the truth than we were at the outset of our journey.