I have received many questions and comments and will respond to them pell-mell.

Any more ~ anymore in positive statements. A correspondent from Pennsylvania wondered why those around him use anymore as meaning “these days, nowadays” (for example, Anymore, I just see people wearing skinny jeans with flip flops) and whether this usage owes anything to Pennsylvania Dutch. I am almost sure it does not.

First, let me remind those who are puzzled by the vagaries of their dialects that there is a wonderful reference work titled Dictionary of American Regional English (its acronym is DARE), a veritable treasure house of local words and collocations. Any more is of course there, with references to the literature on this phrase. The earliest citation in American printed sources goes back to 1859, but antedating is always possible. The map printed in the entry shows that anymore “now, nowadays” occurs far beyond Pennsylvania. However, DARE offers no suggestions on the etymology of the phrase, and I will risk offering one for what it is worth. DARE’s British counterpart, the great English Dialect Dictionary, published a hundred and ten years ago, cites any more from the north of Ireland, though its only sense is “in the future.” I could not remember anything like this adverb in German, Dutch, or Scandinavian. The closest counterpart is German nunmehr “now” and “from now on,” but it consists of nun “now” (not “any”) and mehr “more.”

So I will venture the suggestion (despite some discrepancy between the senses) that anymore was brought to America by Irish speakers. When people say: “I won’t do it anymore” and “I don’t wear flip flops anymore,” anymore can acquire in their mind the meaning “in the future” and “now,” divorced from and independent of the negation. Questions (“Will you wear baggy jeans anymore?”) do not need a negation, so that it is even easier to endow anymore with the meaning recorded in dialects.

Four-letter “Anglo-Saxon” words. Question: “Do you know when and in what circumstances we began referring to profanities as ‘Anglo-Saxon,’ regardless of their actual etymologies?” I couldn’t find the date or the originator of this usage, but the rationale behind it is clear. While reading old articles on etymology, one constantly runs into mentions of male and female genitals, because the sexual metaphor in the development of meaning is ubiquitous. Scholars, regardless of the language in which they wrote their works in the past, avoided even such words as penis and referred to the offensive organ as membrum virile, to give the most typical example. Latin was supposed to throw a pall of decency over the otherwise unpronounceable words and suppress prurient thoughts. Obviously, the desensitized membrum virile and the aggressive cock conjure up different images.

The usage was the same in German and English scholarship, but in English an additional factor has to be taken into account. Words of Romance (Latin and French) and Greek descent sound somewhat removed from the objects they designate and create an illusion of detachment: compare shit and excrements or to shit and defecate, let alone fuck and copulate (have intercourse) and prick and phallus. Two dozen or so of our most offensive words are indeed of Germanic, even if not exactly of Anglo-Saxon, origin. (For instance, I am certain that fuck is a late borrowing from Low German.) Thus profanities, from the inoffensive piss to the grossest among those mentioned above and quite a few more, are indeed “Anglo-Saxon” (relatively speaking), and since they are native, they are usually short and indeed contain only four letters. But I don’t know who introduced the usage referred to in the letter, when it happened, and how the “term” spread.

Flirt. Our correspondent quotes Dryden: “While the spread fan o’ershadows your closing eyes; / then give one flirt, and all the vision flies.” He suggested two interpretations of flirt, and I believe that the second one is correct. Before flirt began to refer to coquetry, it meant a sudden jerk, fillip, and so forth. Flirt in Dryden’s line seems to have exactly this sense.

Glitch, the word and a German family name, its origin. It is most often said that glitch is of German or Yiddish origin. As usual in such cases, an important thing is not only to find a plausible look-alike in a foreign language but also to trace the ways of a supposed foreignism’s penetration into English. Since the probable etymon means “slide, slip,” it need not be dismissed out of hand. But glitch is a recent word of American heritage (it was first recorded in the early sixties of the twentieth century), and we do not know why its originator needed a German or Yiddish source. Given the American scene, Yiddish is perhaps likelier than German, but an exact source has not been found. Dictionaries of German family names state that the name Glitsch goes back to some verb or noun denoting ‘sheen.’ However, the scope is large: from a splendid appearance (then we are dealing with what the Germans call Prunkname “snob name”) to a prominent bald spot (then it was a nickname).

My post on Walter Scott’s vocabulary and the words explained in the commentary was met with a small barrage of rather friendly fire. Two correspondents (one via email) assured me that people still read books. I have no doubt they do. That is why I noted that I was speaking about a mass phenomenon and disregarded exceptions. I constantly deal with students. Some are amazingly well-read, while others have read virtually (actually, essentially: choose your favorite buzzword) nothing. Peevish resentment against the use of less common English words in lectures is rife; look through students’ evaluations of their professors. (I do not mean myself, for in my undergraduate courses I stopped using “fancy” words like doctrinaire and perspicacious long ago.) A public speaker’s rich vocabulary smacks of elitism, a crime only a notch above rape.

I have also been asked why we did not find a more typical picture of a bartizan. Choosing illustrations is a trickier thing than people may realize. Some images are copyrighted, others do not have the resolution we need. Every now and then we are forced to give up our first choice. But I am glad that someone has commented on this matter; only Annie Morgan has once done so in the past. 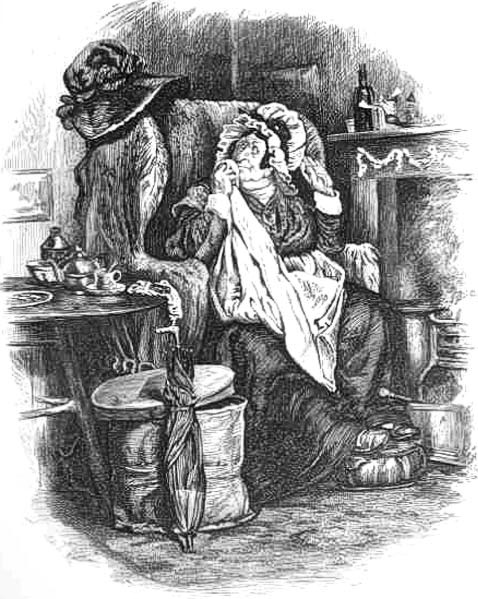 Cussing and going bust. Mr. Cowan cited many additional examples of r lost in English words. All of them were known to me. Today I want to call our readers’ attention to a truly beautiful article by Ernest Weekley “Mrs. Gamp and the King’s English” (The Cornhill Magazine 125, 1922, 565-76). Weekley was an outstanding essayist, and it is a pity how few people remember his articles. I am aware of them only because my team of volunteers has looked through hundreds of popular journals published in the English speaking countries in search of works on word origins. Mrs. Gamp is a nurse in Dickens’s Martin Chuzzlewit, an unforgettable character. Her Cockney is delightful (both as regards the content and the form; it is even more entertaining than the Wellers’). She is a nurse, but she calls herself a nuss, and Weekley explained how common this type of pronunciation had once been among the cultured class. Let me repeat: the article is a true gem.

Split!
(1) “To not be spoken about as a victim is a triumph in its own right, a breath of fresh air from the age-long discussion of the dangers of casual sex for females.” Oh, the raptures of casual sex! To not be victimized for the simple pleasures of the hook-up culture dominating our campuses! The joy of it.
(2) “Obama… this time pressed for an attack that allowed him to often dictate the terms of the debate….” This means “often allowed him to dictate…,” but to naturally speak is hard, especially when the current too often makes one swim with it.

Everybody is they. Right?
(1) “The student has been informed that they should not attend classes without being officially registered.” The administrators’ headaches are severe. I am happy when a registered student come (hear, hear!), but they tend to not come.
(2) Men can also be pregnant; in our unisex world, you never know. From a journal published by Cambridge University: “…if someone calls because they think they’re pregnant — they start thinking about their options and in the end come away with some sense of a way forward.” That’s a proper attitude.
(3) (Submitted by Walter Turner.) From a “review” of a hotel in London: “The beds were comfortable, the rooms quite clean and the view from the window into the Duke of Bedford’s garden in the center of the block made one feel like they were staying in the country.” One are many. It all depends.

To be continued next Wednesday.