Articulate While Black: Barack Obama, Language, and Race in the U.S.


We’re at the Tacoma Theatre in Washington, DC, packed house, predominantly Black crowd. Chris Rock struts across the stage: “You know how I could tell he can’t be President? Whenever he on the news, White people always give him the same compliments, always the same compliments. ‘He speaks so well.’ … Like that’s a compliment… What the fuck did you expect him to sound like?!”

Rock was not talking about Barack Obama, but Colin Powell, and his routine was first performed in 1996. But the insidious racism that Rock identified when Powell’s name was being floated as a presidential candidate has persisted, indeed been amplified, by Obama’s presidency, and there are already hints that Romney supporters intend to exploit it again this campaign cycle, as one website describes Obama as “exceptionally intelligent, articulate.” 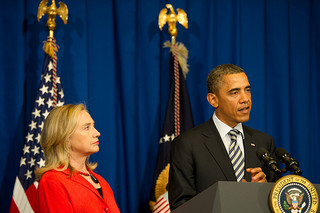 Why the obsession with Obama’s speech? There has been a particular bipartisan fascination with President Obama’s ability to string together sentences. The same sentiment that Rock joked about was expressed by even Joe Biden, who, in early 2007, as a Democratic presidential hopeful, described his future boss as the “first mainstream African American who is articulate and bright and clean and a nice-looking guy.” That same week former president George W. Bush told a reporter, “He’s an attractive guy. He’s articulate.” As Lynette Clemetson wrote at the time, “When whites use the word [articulate] in reference to blacks, it often carries a subtext of amazement, even bewilderment. . . . [which] is inherently offensive because it suggests that the recipient of the ‘compliment’ is notably different from other black people.”

As the campaign heated up, it only got worse. In Game Change, Mark Halperin and John Heilemann’s account of the 2008 election, they reported that Senator Harry Reid thought that Americans might finally be ready to elect a Black president, commenting privately that this was especially true because Obama was, relative to such other Black candidates as Jesse Jackson and Al Sharpton, “light-skinned” and spoke “with no Negro dialect, unless he wanted to have one.”

Reid later apologized for his comments, but not before he found an unusual ally in Rush Limbaugh who repeatedly played a snippet of an Obama speech on education and Title I. Limbaugh urged his audience to listen closely. Obama said: “As a condition of receiving access to Title I funds, we will ask all states to put in place a plan…” Limbaugh stops the tape and asks, “D-ahhhh… Did you catch that? No? You missed it… See, you’re listening to the substance here. You missed this.” After replaying it, Limbaugh said: “This is what Harry Reid was talking about. Obama can turn on that black dialect when he wants to and turn it off. The President of the United States just said here, ‘As a condition of receiving access to Title I funds we will aks [pause] all states.’ … Now, if I use the word aks for the rest of the day, am I gonna get beat up and creamed for making fun of this clean, crisp, calm, cool, new, articulate [pause] President? … I’ll aks my advisors.” [Note to Limbaugh: you could also ask Chaucer and other classic writers who used “axe,” the literary form of the day.]

When Black people are “complimented” for being “articulate,” it often comes along with other adjectives like “good,” “clean,” “bright,” “nice-looking,” “handsome,” “calm,” and “crisp.” This is precisely what makes the articulate compliment feel backhanded. It’s not merely the use of articulate that’s problematic, nor the expression of surprise or bewilderment that makes it suspect, it is also the fact that its adjectival neighbors describe qualities that help create talk about “exceptional Negroes.” These common linguistic patterns open articulate up to charges of racism, which folks may not even realize they’re perpetuating.

Rather than referring to successful African Americans as “intelligent” and “articulate”—like Chris Rock said, “What the fuck did you expect?” — a “post-racial” society would assume that its successful citizens possessed these qualities. And a “post-racist” society would learn to read this “exceptionalizing” talk as language patterns that reinforce racist stereotypes. Such commentary invariably demands that all “Other” Americans gain access to “the Promised Land” based on how “closely [our] speech patterns, dress, or demeanor conform to the dominant white culture,” as Barack Obama put it in The Audacity of Hope. We must continue to challenge ourselves to do better in forming a just, democratic society.

H. Samy Alim directs the Center for Race, Ethnicity, and Language (CREAL) at Stanford University. Geneva Smitherman is University Distinguished Professor Emerita of English and Co-Founder of African American and African Studies at Michigan State University. Their book, Articulate While Black: Barack Obama, Language, and Race in the U.S., examines the racial politics of the Obama presidency through the lens of language.

The decay of the art of lying, or homonyms and their kin