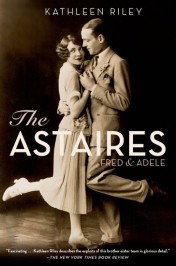 There / was a star danced and under that was I born.
Beatrice in Much Ado About Nothing, Act II, sc.i

I am writing this on Shakespeare’s birthday, April 23rd, and it strikes me how apposite are Beatrice’s words in Much Ado to the birth, on 10 September 1896, of Adele Marie Austerlitz — later Adele Astaire — a personality and a performer of infinite, inextinguishable and irresistible mirth. In London in the 1920s, she was depicted as a misplaced Shakespearean sprite who “should be dancing by glow-worm light under entranced trees on a midsummer eve with a rout of elves, after drinking rose-dew.”

The name Astaire has become synonymous with the most sublime expression of the Terpsichorean art and a metaphor for ‘effortless’ perfection in any field of endeavour. (I have heard it said, for instance, that Roger Federer is the ‘Astaire of tennis’.) The Astaire being invoked on such occasions is, of course, Fred, creator of scores of imaginative dance masterpieces on film. But the name Astaire was not always celebrated in the singular. Adele was Fred’s elder sister and his first dancing partner. Throughout their twenty-five-year theatrical career, she was considered the more naturally gifted and the greater star. There is no film record of their work together and Adele’s retirement from the stage almost immediately preceded Fred’s first tentative foray into Hollywood. As a consequence, Adele, one of the original pop icons of the twentieth century, has not achieved the lasting universal fame of her brother.

Is it then, as some may surmise, a forlorn, even futile quest to try to penetrate the essence of a performer, especially a dancer whose artistry was never captured on film — one said to have possessed the combustive, elusive properties of a lilac flame? The performance historian should not be easily deterred by the apparent or actual impossibility of the task. In Adele’s case there is no shortage of first-hand accounts of her peculiar alchemy and, as her most ardent admirers included some of the greatest literary talents of the twentieth century, these accounts are nothing if not evocative and brimming with insight and immediacy. Moreover, they emanate from the power of live theatre to leave a deep impression on the collective and individual memory. The point is not even how accurately they describe Adele’s dancing technique and style but, rather, how revealing they are of a genuine phenomenon in the cultural imagination of the period. There is no guarantee that a filmed live performance could communicate the Astaire magic, which was intimately entwined in the here and now, or that such footage would not prove anti-climactic. Perhaps it’s better to let our imaginations feast on the vivid eyewitness accounts of those who breathed the selfsame air as Fred and Adele inside theatres and on nights long gone.

Adele was a natural dancer who could be graceful and clownish at the same time, but what those who saw her on stage describe is not so much her dancing genius as the sheer, triumphant force of personality. George Jean Nathan defined her presence as “a dozen Florestan cocktails filtered through silk” and said she had “the air of a Peck’s Bad Girl being blown hither and thither by a hundred powerful electric fans … a figure come out of Degas to a galloping ragtime tune.” But perhaps the critic in 1919 who used the analogy of a lilac flame put it best — a lilac flame burns vigorously from the life-giving elements of potassium and oxygen.

The date chosen for International Dance Day, April 29th, commemorates the birthday of Jean-George Noverre (1727-1810), the creator of modern ballet. In his Letters on Dancing, Noverre wrote:

Dancing is possessed of all the advantages of a beautiful language, yet it is not sufficient to know the alphabet alone. But when a man of genius arranges the letters to form words and connects the words to form sentences, it will cease to be dumb; it will speak with both strength and energy; and then ballets will share with the best plays the merits of affecting and moving.

One of the two main qualities that distinguished Adele and Fred’s dancing was its eloquence and narrative power. When they made their London debut in Stop Flirting in 1923, Francis Birrell, writing in the Nation and Athenaeum, said they “uttered the least important word with every inch of their bodies, never being content with the employment of the essential extremities – tongue, hand, or foot.” Of Fred, the Birmingham Post reported, “he has not only winged heels, but winged arms and winged back” and, of Adele, “hers is not only the poetry of motion but its wit, its malice, its humour.” The Birmingham Dispatch provided an account of the mesmeric, transporting quality of the siblings’ richly nuanced somatic vocabulary: “Their humour lies in gesture, their attraction in the power to set us dancing with them, to send us in spirit, twirling and striding and frolicking in glorious abandon.” Which brings us to their other main distinguishing quality – delight; a warmth and openness and something intrinsically joyful and forward-looking. The Astaires in fact exemplified F. Scott Fitzgerald’s fundamentally romantic if elegiac conception of America as “a willingness of the heart.”

The best dancing tells us a story, illuminates a character or psyche, enables us to see the inner workings of music in motion, and above all, touches and exhilarates us at a profoundly human, elemental level — even as its exponents perform physical feats which seem preternatural or indeed divinely inspired. As I began, so I end with the Bard. Laurence Olivier described Shakespeare as “the nearest thing in incarnation to the eye of God.” Perhaps it could be said that the likes of the Astaires, of whom one London critic observed “they almost ceased to be human beings to become, as it were, translated into denizens of an Elizabethan forest,” are the nearest thing in incarnation to the music and laughter of God – the literal embodiment of a deep, redemptive joyfulness.

Born in Australia and educated at Sydney and Oxford Universities, Kathleen Riley is a classical scholar and modern theater historian. At Oxford in 2008 she convened the first international conference on the art and legacy of Fred Astaire. She is the author of the new book The Astaires: Fred & Adele.