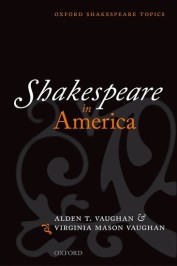 Although England had colonies in Virginia and Bermuda before William Shakespeare died in 1616, he never came to America. But no Englishman ever had such a triumphant posthumous migration to America as did Shakespeare: in books (by him and about him), in performances of his dramas on virtually every stage from coast to coast, in school and college curricula from the nineteenth century to the twenty-first, in Broadway musicals, in “blackface” minstrel shows, in summer festivals, in stuffed dolls, trinkets, key rings, and tea cups. Shakespeare in America is multifaceted and ubiquitous.

Alden T. Vaughan is professor emeritus of history at Columbia University. His publications include American Genesis: Captain John Smith and the Founding of Virginia; Transatlantic Encounters: American Indians in Britain, 1500-1776; and Roots of American Racism a collection of his essays on Europeans, Indians, and Africans in early America. Virginia Mason Vaughan is professor of English at Clark University, Worcester, MA. Her books include Othello, A Contextual History; Performing Blackness on English Stages, 1500-1800 ; and a volume in the “Shakespeare in Performance” series on The Tempest. Together the Vaughans wrote Shakespeare in America, Shakespeare’s Caliban: A Cultural History, and edited The Tempest in the third Arden series.