As promised, the first of the fifty-two posts due to appear in 2012 will be devoted to the verb begin, whose siblings have been attested in all the West Germanic languages (English is one of them) and Gothic. Surprisingly, they did not turn up in Old Scandinavian, except for Danish (under the influence of German?).  Old Icelandic for “begin” was byrja, and its cognates continued into Norwegian and Swedish, let alone Modern Icelandic and Faroese.  The etymology of begin has not been explained to everybody’s satisfaction, but such is the history of most etymological flesh.

Begin is a combination of the prefix be– and the root –gin, and the verb’s cognates never occurred without a prefix, though the prefixes varied widely: we find -gin with du-, on-, ont-, in-, be-, bi-, and a– (the latter designated long a, as in Engl. father).  Usually, when prefixes are appended to a root so freely, the root is transparent.  Today, we may not understand how get is connected with forget or how German entsprechen “correspond” is related to sprechen “speak,” but it would be no less odd to have forget and entsprechen without get and sprechen than to have defrost without frost.  What then was gin, a root that could not stand on its own?  To make things even worse, begin tended to have an irregular preterit; the irregularity, which seems to be old, suggests that the verb is also very old.  Some scholars think that the mysterious gin came from a substrate, an early unrecorded indigenous European language, and was later combined with multiple prefixes only in Germanic.  Such a hypothesis would carry more conviction if we were dealing with a plant or an animal name or a term of material culture, but why should a word like begin have ousted its native synonym?  Wherever the speakers of the Germanic languages may have come from, they surely had some word for “begin.”  Anyway, such a hypothesis makes further thoughts on the problem unnecessary, because nothing is known about that substrate, and the question about the inability of gin to function without prefixes remains.

Etymologists in search of a solution routinely do several things.  They collect all the recorded forms of the word.  With regard to begin, this has been done.  After that they comb through the closely related languages in the hope that the cognates may match phonetically but have somewhat divergent senses and therefore furnish a clue to the word’s original meaning.  The Germanic cognates of begin (with some prefix) are in plain view, and all of them mean the same.   This procedure is followed by a hunt for cognates outside the main group.  We will soon see that though the hunters were many, the game escaped.  Finally, as many synonyms as possible are netted, and the question is asked: “What is the ‘motivation’ for calling a spade a spade?” (In our case: “From what less abstract concepts does the sense ‘begin’ usually develop?’”).

Let us first look at the synonyms.  The earliest meaning of Engl. start was “jump, leap,” as in to start at the sound of a shot.  Start “set out for a journey” and “begin” developed later.  Commence, ultimately from Latin, goes back to some form like comminitiare, and initiare “initiate” is a derivative of init-, from in and ire “go,” so that the foundation of commence is “go into,” a good basis for “begin.”  Icelandic byrja is obscure, and we will not yield to the temptation of explaining one opaque word by referring to another equally opaque one (nothing good ever comes from this procedure).  German, in addition to beginnen, has anfangen and anheben (both mean the same; however, the use of anheben “begin” is restricted).  Fangen means “catch,” and heben means “raise,” while an– corresponds to Engl. on.  The path from “catch” and “raise” to “begin” must have been fairly straightforward.  One can continue stringing such synonyms for a long time, and I’ll cite only one more word.  The stem of origin, from Latin origo, is oriri “arise.”  It now becomes clear why etymologists wander among the Indo-European words meaning “catch,” “rise,” and “go,” expecting to find a solid match for –gin.

However, Germanic itself has a few forms that resemble the root of begin.  The Old Icelandic prefix gin– meant “great, vast,” presumably, from “wide open”; its cognate was Old Engl. ginn “spacious.” Ginnungagap is the vast void of the Scandinavian creation myth (gap is related to Engl. gape).  If begin and Icelandic gin– are indeed related, begin must have first meant “open widely,” and its root is akin to Engl. yawn.  We obtain “begin” = “open.” (To this day, we can “open” a meeting, that is, begin it.)  The way the verb is used in the Old Germanic languages, especially in Gothic and German (I will skip the details), confirms this reconstruction.  However, like all the other etymologies, it fails to explain why begin and its congeners needed a prefix.  Icelandic has ginna “to fool, dupe,” apparently, from “entice; bewitch”; this sense seems to have been the product of religious usage.

Several non-Germanic roots have been compared with –gin.  One can be seen in Latin pre–hendere “seize” (compare Engl. comprehend and prehensile).  Prehendere is a perfect match for German anfangen, but neither has anything to do with “open wide.”  The same holds for Slavic kon-, which, as mentioned in the post on end, occurs in words meaning both “begin and “end” and is very possibly related to Latin recens “fresh” (the ultimate source of Engl. recent; re– is a prefix).   An unsolved question is whether the putative cognates of begin should have initial g– or k-.  In the scholarly literature on the etymology of this verb, a few other possibilities have been weighed and many words from Lithuanian, Sanskrit, Irish, Welsh, and Albanian have been mentioned. But the problem is clear, and there is no need to multiply forms from all over the world.  If we stick to the “open wide” idea and choose g– cognates (with g– from Proto-Indo-European gh-), we should look for them among words like Latin hiare “gape” (compare Engl. hiatus), related to yawn, German gähnen (the same meaning). Icelandic gin-, and so forth.  Of the imperfect solutions known to me this one is perhaps the best.

No “images” of the ginnungagap I have been able to find look frightening enough to me.  So I have chosen a picture by the great Lithuanian painter Mikalojus K. Čiurlionis.  The medieval Scandinavians would have probably liked it: a strange creature watching the still uninhabited world. 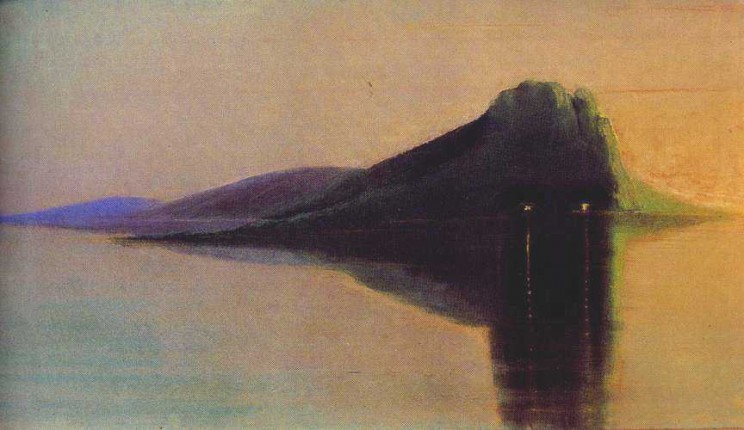