Word Origins... And How We Know Them

Last Wednesday, in anticipation of the inevitable calendar leap, I discussed the origin of the word end.  The end has come.  This post happens to be the last in 2011 — not really a rite of passage, for a week from now another Wednesday will bring the world another post, dated January 4, 2012.  As announced, it will be devoted to the verb begin.  One should not take December or oneself too seriously, but I am pleased to say that this blog is read and quoted by many and that I continue to receive letters and comments from all over the world.  I have noted in the past that the best way to learn whether one has a readership is to make a mistake or to say something that needs clarification.  Not long ago, I mentioned a strange inconsistency, namely that we say go to college (no article) but go to the university (with the definite article).  I should have said not “we” but “in American English,” and several people immediately corrected me.  Since in my childhood and youth I identified English with its British variety, I knew that in England people go to university, but I forgot or did not know that the same article-less usage prevails in Scotland, Australia, and Canada.

MI was also pleased to hear from Heiner Gillmeister, who discovered my old posts on golf and tennis and referred me to his publications I had missed.  Mr. Gillmeister is an eminent specialist in the history of sport, and my suggestions on the etymology of both golf and tennis were heavily dependent on his results. (I may repeat my usual request to everybody: inform me of your works on etymology: this is the most precious grist that comes to my bibliographical mill.)  Perhaps my survey of the literature on Rotten Row will elicit more comments and even a new hypothesis on the origin of this place name.  So far I have received only two (positive) responses, and I may add another old suggestion to those I discussed in the essay: an nineteenth-century author traced Rotten to rowan (not to be taken seriously).

In February 2012 the world will celebrate the bicentennial (bicentenary) of Charles Dickens’s birth.  Somebody quipped that, according to the famous Russian literary scholar Yuri Tynianov, the main event in modern Russian history was Pushkin’s birth. Tynianov (stress on a) may have been right.   In similar fashion, I believe that few dates in recent European history can eclipse February 7, 1812.  Also in 1812, the first edition of the Grimms’ tales was published.  Dickens’s novels and the Grimms’ tales defined European culture like few other literary works.  To be sure, in 1812 Napoleon invaded Russia.  And where is he?  In history books.  But Dickens and the tales are locked forever in our hearts.  I cannot promise that I will be able to write a post about Dickens or even about the brothers.  Dickens, unlike the Grimms, was not an etymologist, though thanks to him, a time-honored phenomenon received the name wellerism, and linguists still argue over the accuracy of his rendition of the Yorkshire dialect (in Nicholas Nickleby) and cockney.  Walter Skeat had full confidence in Dickens’s power of observation as regards London speech, and he knew what he was saying.  Even if I don’t devote a post to Dickens, my conscience will be clear, for Oxford University Press asked me to write a holiday essay about some of its classics, and I wrote a comparison of David Copperfield and Thackeray’ Pendennis, both of which appeared in 1850*.  Incidentally, Skeat died in 1912, and there will certainly be a post about that centennial (centenary).

One of our correspondents wrote that his firm frowns on the use of the word Christmas and advises the coworkers to replace it with winter festival.  He wanted to know the origin of the phrase winter festival and the word winter.  I cannot tell who coined the collocations season’s greetings and winter festival, but the latter was easy to come by.  For example, some old dictionaries defined Yule as “Christmas festival,” and any period appointed for celebration or commemoration is called festival.  Likewise, folklorists and ethnographers describe agrarian festivals.  The origin of winter is debatable.  The answer depends on where the earliest speakers of the Germanic language spent their winters.  Did they see snow in their winter?  Was it a cold or a mild season?  Several etymons (sources) of the word winter have been proposed, wind, wet, and a Germanic cognate of Old Celtic windo– “white,” among others.  Gothic, an old Germanic language recorded in the fourth century CE, had wintrus, practically the same word we know from English.   In the previous “gleanings,” I touched on the difference between ecology and ecosystem. The comment that –ology need not designate the name of a scholarly discipline is correct, and I am well aware of this fact, for I constantly speak about etymology as a science and the etymology (= origin) of a word.  But this development is unpredictable: it occurred in some words but not in others.

Category and talent.  Why have these words changed their meaning so drastically, and how common are such changes?  Greek categoria meant “accusation, charge,” literally, “statement made in the assembly” (agora “market place, assembly”).  Its fortunes in the European languages were defined by Aristotle, who used the word in his logic.  There it refers to the highest notion, especially one derived from the logical analysis of the forms of proposition.  From Greek, via late Latin, the word made its way into French and from French into English.  Also the history of talent was determined by a chance event.  Its Greek etymon designated “scale (balance); a particular weight, especially of gold.”  But the word’s modern sense “marked aptitude”   goes back to the phrase in Matt. XXV, 15.  Words do sometimes modify their meaning under the influence of famous books (in English one can cite examples from the history of Shakespeare’s vocabulary), but this situation is relatively rare.

I am including the next question in the hope that somebody versed in Semitic etymology will be able to answer it.  Our correspondent writes: “I have found significant overlap between the words and related words for “myrtle” (hadas) and “betrothal” (eirusin) and their possible connection to Eros.”  He wonders what I think about the possibility of this relationship.  In the letter, the forms were reproduced, not only transliterated.  At first glance, the words in question are hardly related.  The origin of the Greek name is unknown;  its connection with a Sanskrit word meaning “”filled with desire” has been suggested.

Who/whom.  The confusion is so well known that it is silly to feel amused.  Yet some people distinguish the forms.  Even undergraduates sometimes do.  From a letter to a student newspaper: “About a month ago, a friend of mine introduced me to a guy who she thought I would be great for.”  The “guy” lived up to the girls’ expectations but was less active than expected.  Perhaps he was intimidated by his date’s flawless grammar: in such and all other circumstances, he probably says whom she thought.  A writer for the Associated Press knew that there was danger here but could not recognize it.  Hence the following passage: “He purged or banished senior officials who he considered power-hungry.”

I think the reason I detest sentences like when a student comes, I never make them wait is that the antecedent of they/them has the indefinite article.  And this is probably why the plural after somebody, anybody, and even someone does not sound offensive.  “A student” cannot be “they.”  “…a manager cannot have such a relationship with someone they oversee.”  I agree, but I also believe that a manager cannot be “they.”  “…each writer clearly, succinctly and intelligently stated their cases.”  More of the same?  Not quite, for both writers were men; yet the letter writers (two signatures) used the only pronoun they were taught to use in such constructions.  I once overheard (and even quoted) the following snippet of conversation.  “I met John at a party and liked him a lot.  We exchanged telephone numbers.”  “And did they call back?”  There are no limits to people’s stultification.

A Happy New Year to timorous and temerarious lovers of men, women, and words, to all those who already love us, and to those who will discover us in 2012!

And here is a picture of my colleagues, the gleaners. 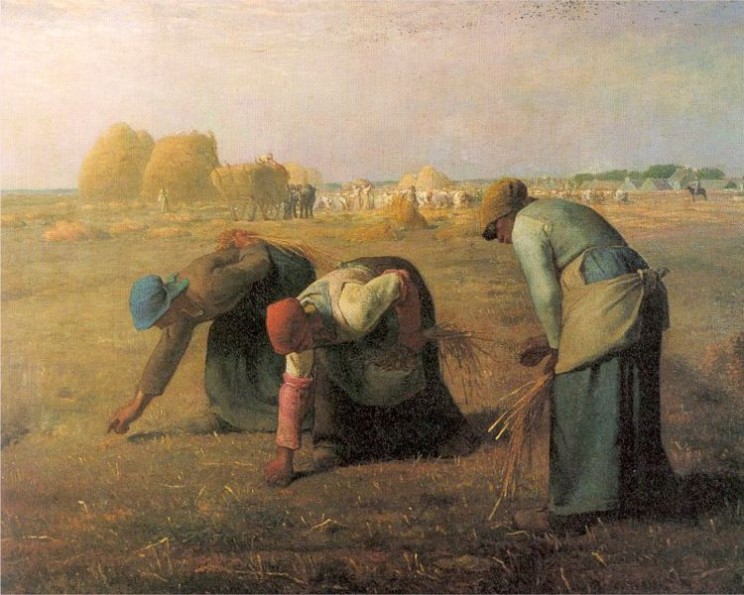