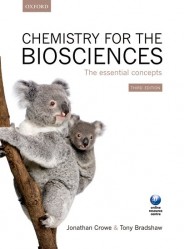 Chemistry for the Biosciences

This is the latest post in our regular OUPblog column SciWhys. Every month, OUP editor and author Jonathan Crowe will be answering your science questions. Got a burning question about science that you’d like answered? Just email it to us, and Jonathan will answer what he can. Today: why are we told always to finish a course of antibiotics?

Most of us have at one time or another been prescribed a course of antibiotics by our GP. But how many of us heed the instruction to complete the course – to continue taking the tablets or capsules until none remain? Very often, our strict adherence to the prescription fades in line with our symptoms: the prescription may last for, say, seven days, but we’re often feeling much better after just two or three. So why bother continuing to take the antibiotic? After all, if we’re feeling better, the antibiotic has done its job, right? Well, you may think so. But, in fact, stopping a course of antibiotics early can have potentially lethal consequences. How can that be?

To answer this question, we must travel inside our body to mingle with the bacteria the antibiotics have been prescribed to kill. At face value, all the bacteria in a given population might seem identical. But look a little deeper, and you’ll see subtle differences. And one difference is the way in which they respond to a given antibiotic.

I described in a previous post how antibiotics are designed selectively to attack bacteria rather than causing harm to our own cells, which must necessarily get exposed to the antibiotic as it travels through our body in search for the alien intruder within. But different bacteria, even from within the same population, may respond differently to a particular dose of antibiotic. The ‘weak’ ones may be susceptible to a relatively low dose – they may be killed after just a few days of exposure to the antibiotic; by contrast, others may be much more resilient, and will still be alive after a few days of treatment.

The important point here is that the population as a whole is made up of bacteria exhibiting a range of tolerances – at one end of spectrum, a few real weaklings; at the other, a few really resilient ones. And, in between, we find many average, run-of-the-mill individuals, who can hold out against the antibiotic for so long – but not for very long. (I saw the same kind of distribution within a population when we grew some tomato plants this summer: some were noticeably short, some were unusually tall, but a majority hovered somewhere in between.)

But what’s causing this difference in tolerance? I mentioned in a previous post that each time a genome is copied there’s a chance a mutation (an error) will creep in to one of the genes making up that genome. Well, every time a bacterium reproduces it has to make a copy of its genome to pass on to its offspring – and, every time, there’s a chance an error will creep in. The chances are that the variation in tolerance to antibiotics that we witness in this population of bacteria is due to slight variations in their genomes; it could be that our resilient individuals show this resilience because they picked up mutations not present in their weak or average cousins.

Now, let’s return to our bacterial infection and imagine that we’ve started to take a course of antibiotics. It takes just a day or two to kill the real weaklings. And, in three or four days, even the Mr Averages will start to feel the proverbial heat. At this point, the population as a whole will have gone into noticeable decline, and we may start to feel much better as the number of alien invaders reduces.

But what has actually happened by the three or four day stage? The population as a whole may have shrunk in size – we’ll have rid ourselves of the few real weaklings and the larger number of Mr Averages – but we’ll be left with the few hangers-on at the other end of the spectrum, the real bruisers.

Before we started taking the antibiotics, the antibiotic-resilient bacteria (our ‘bruisers’) were fighting for a share of the available food with all the other members of the population. (It’s important to note that, when I talk of ‘weak’ or ‘resilient’ individuals I’m only referring to their tolerance level to antibiotics, not their ability to scavenge for food, and other aspects of survival in an antibiotic-free world.) In essence, the bruisers were being kept in check by everyone else – they remained in the minority because the whole population, including the weaklings and the Mr Averages, was growing at about the same rate. Now, three or four days in, the bruisers suddenly find themselves with much less competition for food. Imagine going to the buffet table at a wedding with 200 guests, all of whom are vying for a slice of the pie (quite literally), versus going to the same-sized buffet table with the same amount of food at a wedding attended by just 20 guests. At which wedding are you most likely to be able to fill your proverbial boots?

Now let’s consider what happens after day three or four, once the supply of antibiotic has stopped. At this point, remember, there are just a relatively small number of antibiotic-resilient bacteria left, but no weak or average ones. When the resilient bacteria suddenly find themselves the guests at an unexpected banquet – with competition for food gone – they do what bacteria do best: they reproduce. And without the previous competition for food, they can do so rapidly.

So, we’ve suddenly gone from a mixed population in which the majority didn’t take kindly to antibiotics and only a few were the bruisers, to one in which virtually everyone is unusually tolerant to antibiotics. And this is where the real danger can lurk.

I mentioned above that the resilient bacteria may exhibit their resilience because they have accumulated more errors in their genomes than their weak or average cousins as successive generations have reproduced. As this resilient population now continues to thrive, it risks accumulating even more errors. And one of those errors could be what it takes to tip the balance from the bacterium being highly-tolerant of the antibiotic to it being completely resistant. You don’t need to be a medical expert to realise that complete resistance to an antibiotic is a really bad thing. If a bacterium has overwhelmed our immune system, and we don’t have an antibiotic to act as a back-up defence system, we have no weapons left to fight with.

If we carry on taking our antibiotics as prescribed, the story ends quite differently: even the resilient bacteria lose the will to live in the end. But we have to keep up the pressure by finishing the course of antibiotics. That way, any resilient individuals don’t get to dominate, and we reduce the risk of one of them picking up a mutation that makes them virtually invincible – but which is potentially lethal for us. In future, you know what you need to do…

Jonathan Crowe is Editor in Chief for Natural, Health & Clinical Sciences in the Higher Education Department at Oxford University Press. A biochemistry graduate, he manages OUP's undergraduate textbook publishing programme across a range of science and science-related disciplines. He is also an author of Chemistry for the Biosciences, now in its second edition, and was a runner-up in the Daily Telegraph/BASF Young Science Writer Awards (in 2001, when he was still classed as being ‘young’). If you'd like to find out more about how our immune system protects us from potential invaders, you could try reading 'Living with Germs' by John Playfair. You can read more SciWhys posts on the OUPblog.