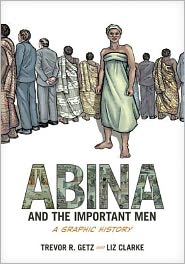 Abina and the Important Men: A Graphic History

Abina and the Important Men is an interpretation of the testimony of a young, enslaved woman who won her way to freedom in late nineteenth century West Africa and then prosecuted her former master for illegally enslaving her. October 21 marks the 155th anniversary of the date that she forced a British magistrate and a jury of eleven affluent and powerful men to hear the charges she was making against an influential male land-owner.

Having encountered Abina’s testimony in the National Archives of Ghana more than a decade ago, I felt driven to turn it into an annotated graphic history both from a sense of obligation to Abina and because of an inkling that her story could speak to a cluster of political and intellectual tensions in our society and within myself. These tensions come in the form of what I call the “liberal dilemma”. This dilemma seems to recur in a great deal of the literature, media, and art that makes up the intellectual matrix of our society. It begins with the desire deep within liberals like me to make a better world by helping everyone claim the universal birthrights of liberty, fraternity, and equality. Yet the liberal worldview is also intertwined with a history colonial privilege, bourgeois society and its attitudes towards the lower classes, and male patriarchy and paternalism. Thus the acts of “doing good” that characterize liberalism include the “civilizing mission” that hid the horrors of modern empire, the state-building justifications of wars in Iraq and Afghanistan, and the sidelining of women and people of color.

Personally, I have grappled with my “liberalness” for much of my adult life. The child of white South Africans who opposed apartheid, I have always wanted to lead the fight against evil, yet I have had to question my assumption that I had the right to lead that kind of war. In the classroom, I have hoped to promote a cosmopolitan knowledge of the world in my students, and an appreciation of the need to study others. Yet I have come to wonder how we can do so without making those others the objects of our gaze when they are seemingly powerless to study us back! Intellectually, I have had to contend with the notion that the past is another country which we can never know. I feel deep within me the pull to search for the methodologies by which we might strive to understand the worldviews and perspectives of those who lived in earlier times, especially the people whose voices we hear the least – the seemingly powerless and the apparent victims. Yet I have come to accept that they are often rendered voiceless, not so much by their own lived experiences as by the ways that history and historians have silenced them and rendered them objects of our gaze.

Now let me explain why this book is a way for me, and I hope others, to grapple with this liberal dilemma. It’s not because this is somehow a “rescue” of Abina’s voice. Over the past few years, I have come to understand that Abina did not ever need rescuing for her own sake. She was tough, she was expressive, she found for herself ways of fighting the powers that impeded her. Rather, the book represents my realization that Abina’s voice needed to be brought out and interpreted for our sakes, because she has so much to teach us about a better way of being in the world.

This is why much of this book is actually about us. In interpreting Abina’s story in graphic form, I and my accomplices – Liz Clarke, the artist, and Charles Cavaliere, my beloved editor at Oxford – chose to reveal everything and try to hide nothing. Rather than pretending that we are the objective, all-knowers, we lay out clearly the limitations of our work, the ethical issues that bedevil us, the problematic relationship we have with Abina. We also carefully place our interpretation next to the original document that bears Abina’s words. We are, in effect, asking students and colleagues and readers to question our work, and to develop their own understandings.

As a way of grappling with the liberal dilemma this book both accepts the idea that it is good to study others and the need to question why and what we are doing when we interpret their words for ourselves. It especially asks this question in light of the power and wealth differential between Abina and ourselves.

I will not pretend that I don’t love the Abina I have constructed in my mind, even though she is only an unreal representation of the real thing. Maybe the real-life Abina was not the strong, individualistic, empowered survivor that we have made her out to be. Maybe she did not see her testimony the way I see it – as a fight for the right to have a voice and be heard. Undoubtedly, she was far more complex that we can understand from this real document. I cry, that I cannot know the real her. If I feel richer just from the little bit I do know, and from the yearning to know more, then I hope you will excuse me.

I do not know if Abina and I would have been friends if we were to have met. I find myself to be a little in awe of her energy and I can accept that her experiences and mine have been very different. But I think she and my daughter could have found happiness hanging out with each other, and I hope this book can be a way for Kaela, and many others like her, to begin asking the questions that will lead them to appreciate how the world looks through other people’s eyes, including those of Abina Mansah. I believe striving to do so does, in fact, have the potential of making the world a somewhat better place.

Trevor R. Getz is Professor of History at San Francisco State University. He is the author of Abina and the Important Men: A Graphic History with artist Liz Clarke.