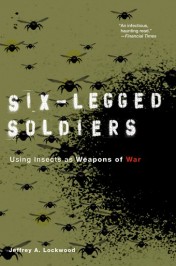 Entomologists estimate there to be around a quintillion individual insects on the planet–and that’s just insects. Bugs are everywhere, but how much do we really know about them? Jeff Lockwood to the rescue! Professor Lockwood is answering all your bug questions–one at a time, that is. Send your question to him care of [email protected] and he’ll do his best to find you the answer.

What are those super-fast, reddish, fuzzy-looking, centipede-like things?

It would sure help hapless entomologists if people would provide just a teensy bit more information when asking, “What is it?” sorts of questions.  Helpful clues include things like: where you live, where you saw it, when you saw it, how big it was, and how many there were.  But never one to shy away from creative and somewhat informed speculation, I’m going to bet that your “super-fast, reddish, fuzzy-looking, centipede-like thing” was — drum roll… — a centipede!  In fact, your description aligns quite well with the ubiquitous house centipede, Scutigera coleoptrata.

Let’s consider your description one term at a time.  “Super-fast” sure fits the house centipede.  The thing runs like greased lighting.  In fact, it can travel 1.3 feet/second.  Given that the creature is between 1 and 2 inches, that speed works out to traveling about 10 body lengths per second.  Figure that a human is 6 feet (that’s my height and I’m a human), so 10 body lengths per second would mean that I’d be running 60 feet per second.  That would be 3,600 feet per minute, or 216,000 feet per hour—or 41 miles per hour.  Usain Bolt (who’s way faster than I am) ran 100 meters in 9.58 seconds which works out to about 23 miles per hour.  So a house centipede would absolutely smoke Usain Bolt in a race if they were the same size (and if we set aside all of those niggling details about biomechanics of small and large organisms).

As for “reddish”, well that’s a bit of a problem.  Most descriptions of the house centipede refer to the little fellow as black, brown, yellow, or ivory.  But brown-yellow isn’t all that far off from “reddish”—and the things move fast so maybe their color was a bit hard to discern.  The centipedes I’ve encountered in the garden are often reddish.  I figure that one person’s brownish is another person’s reddish, so I’m sticking with my identification.

The real problem, or so it would seem, is “fuzzy-looking”.  Centipedes are not hairy at all.  In fact they’re as bald as Yul Brenner or Telly Savalas, which pretty much dates me.  If you don’t know these two classic actors, then imagine Patrick Stewart—the guy who played Captain Jean-Luc Picard on that pale imitation of the great Star Trek series that I knew as a kid.  But I digress.  How can I cram the quality of fuzziness into the glabrous house centipede?  Easy.  The centipede has as many as 15 pairs of incredibly long legs (each leg is nearly as long as the whole body) that appear to surround the body.  So when this beast is skittering across the floor, it creates the distinct impression of being fuzzy.  But the hairiness is really just the spindly legs—or that’s my story, and I’m sticking with it.

And finally, the reason it is “centipede-like” is that it is, well, a centipede.  My identification is further supported by the fact that the house centipede is a very common creature, being found in almost all 50 states from Maine to California.  They like moisture, so I’m thinking you might’ve encountered them either outside in a damp habitat such as under a woodpile or in the compost—or perhaps indoors scampering across the basement or maybe in the bathroom or kitchen.  I’ll further wager that you ran into each other in the fall (when they seek a place to spend the winter) or the spring (when the weather warms up).  And I’ll also bet that you see the little beasts at night, since they are nocturnal predators.

The predator-thing leads me to the question that almost always follows, “What is it?” and that is: “How can I get rid of it?”  You could think of your house centipedes as little, predatory guardians of your homestead.  They eat termites, cockroaches, silverfish, ants, and—get this—bed bugs. Everybody loathes bed bugs, so anything than chomps these insects has to be a household asset, right?  Now it is true that centipedes are venomous, and the house centipede injects its venom through a pair of modified legs (not mandibles—weird, eh?).  But it’s not that hard to maintain some ‘personal space’ between you and your watch-centipedes.  I’ve never heard of anyone being grievously harmed by them, which means that somebody is sure to tell me about their niece who was attacked and nearly lost her foot or something of that sort.  Until then, I’m defending the house centipede as being at the harmless end of the arthropod spectrum (insects have six legs, so centipedes aren’t insects but they are arthropods, along with crabs, lobsters, spiders, scorpions, millipedes, and insects).

If you are unconvinced that your centipedes are more helpful in your house than your lazy brother-in-law who drops in to raid your refrigerator and monopolize your favorite chair and you insist on getting rid of them, the best approach is a three-fold strategy.  First, get eliminate their food.  Remember, these are predators so they must be finding prey which means that you’ve got other, less-helpful critters in the house (including your brother-in-law, but he’s too big for the centipede to handle).  So, figure out what’s feeding the centipedes and empty the larder.  Next, even though they’re called ‘house centipedes’ they’re not all that fond of your house.  After all there’s probably a lot more food outside, unless your basement is a silverfish sanctuary or your bathroom is a roach reserve, which goes back to the first element of the plan.  My point is that they’re looking for a cool, dark, damp place to hang out.  That means if you keep your basement and bathroom dry, the centipedes won’t be keen on moving in.  Finally, if you seal cracks and crevices then when it comes time for the centipedes to find a place to overwinter, your house is much less likely to become their home.

Jeffrey Lockwood was hired as an insect ecologist at the University of Wyoming in 1986. But over the course of 20 years he metamorphosed into a Professor of Natural Sciences & Humanities, with a joint appointment between the Department of Philosophy and in the MFA program in Creative Writing. He teaches courses in natural resource ethics, environmental justice and the philosophy of ecology, along with creative non-fiction writing workshops. He is the author of Six-Legged Soldiers: Using Insects as Weapons of War.

Animal of the Month: More to the bee than just honey