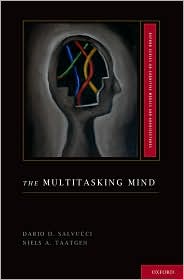 If the mind is a society, as philosopher-scientist Marvin Minsky has argued, then multitasking has become its persona non grata.

In polite company, mere mention of “multitasking” can evoke a disparaging frown and a wagging finger. We shouldn’t multitask, they say – our brains can’t handle multiple tasks, and multitasking drains us of cognitive resources and makes us unable to focus on the critical tasks around us. Multitasking makes us, in a word, stupid.

Unfortunately, this view of multitasking is misguided and undermines a deeper understanding of multitasking’s role in our daily lives and the challenges that it presents.

The latest scientific work suggests that our brains are indeed built to efficiently process multiple tasks. According to our own theory of multitasking called threaded cognition, our brains rapidly interleave small cognitive steps for different tasks – so rapidly (up to 20 times per second) that, for many everyday situations, the resulting task behaviors look simultaneous. (Computers similarly interleave small steps of processing to achieve multitasking between applications, like displaying a new web page while a video plays in the background.) In fact, under certain conditions, people can even exhibit almost perfect time-sharing – doing two tasks concurrently with little to no performance degradation for either task.

The brain’s ability to multitask is readily apparent when watching a short-order cook, a symphony conductor, or a stay-at-home mom in action. But our brains also multitask in much subtler ways: listening to others while forming our own thoughts, walking around town while avoiding obstacles and window-shopping, thinking about the day while washing dishes, singing while showering, and so on.

Multitasking is not only pervasive in our daily activities, it actually enables activities that would otherwise be impossible with a monotasking brain. For example, a driver must steer the vehicle, keep track of nearby vehicles, make decisions about when to turn or change lanes, and plan the best route given current traffic patterns. Driving is only possible because our brains can efficiently interleave these tasks. (Imagine the futility of only being able to steer, or plan a route.)

So how has multitasking earned such a negative reputation? In large part, this reputation stems from unrealistic expectations. The brain’s multitasking abilities – like all our abilities – come with limitations: when performing one task, the addition of another task generally interferes with the first task. For many everyday tasks, the interference is negligible or unimportant: your singing may affect your showering, or thinking about your day may affect your dish-washing, but likely not so much that you notice or care.

Other tasks, though, require every ounce of attention and can push past the limits of our multitasking abilities. In driving, the essential subtasks are demanding enough; additional subtasks – texting, dialing, even talking on a phone – increase these demands, and when controlling a 3000-pound vehicle at 65 miles per hour, even these minimal additional demands may lead to unacceptable risks.

Still other tasks do not have safety implications per se, yet most would consider them important enough that multitasking in those contexts is undesirable. A student in class is already multitasking in listening to the teacher, processing ideas, and taking notes. If this student is checking Facebook at the same time, this extra subtask drains mental effort away from the more critical subtasks and dilutes the learning experience.

The problem with multitasking thus lies not in our brain’s inability to multitask efficiently, but in our own priorities and decision-making. When we choose to multitask, we are deciding – consciously or not – to accept degraded performance on one or more of tasks involved. And when we still choose to multitask when it is undesirable (as in the classroom) or unacceptable (as in driving), we should hold ourselves accountable for these decisions. So if you walk into a pole or wreck your car while texting, don’t blame your brain; blame yourself.

Dario Salvucci is a professor of computer science and psychology at Drexel University, and author with Niels Taatgen of The Multitasking Mind. Dr. Salvucci has written extensively in the areas of cognitive science, human factors, and human-computer interaction, and has received several honors including a National Science Foundation CAREER Award.

When narcolepsy makes you more creative