Half of 2011 is behind us.  This is reason enough for looking through one’s notes and offering a retrospect.

Once again many thanks to those who responded to my question about the difference between in future and in the future.  I am sure I could find the answer in the OED, and I am sorry that I did not begin my search by opening the 1974 edition of A. S. Hornby’s Oxford Advanced Learner’s Dictionary of Current English, in which it is said clearly: “In future ‘from this time onwards’.”  So the usage is after all British, but I think I was right in suggesting that in the United States the phrase without the article is not common, though I sometimes hear it. 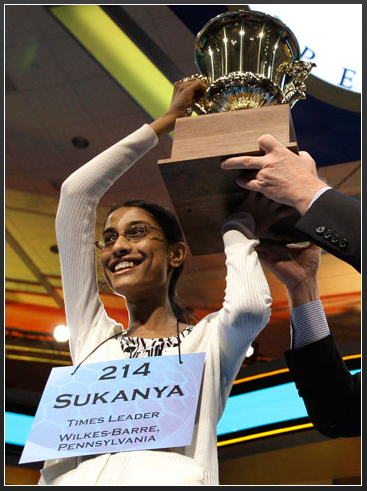 From the zanja.  Not long ago the 84th Scripps National Spelling Bee came to an end.  Someone who has been eliminated is an eliminee, right?  So we have seen pictures of the heartbroken eliminees and the triumphant winner who took home the trophy and more than $40,000 in cash and prizes.  My heart goes out to that 14-year-old girl and all those who came close to her, and I am conveying my condolences to their parents.  To turn one’s memory into a trashcan of words that will never occur in a hundred years and will be forgotten on the next day!  The winning word was cymotrichous, but hypotrichosis also stood by.  Dreikanter (when pronounced in English, it sounds like dry canter, a good name for a dehydrated horse), jugendstil, and nachschlag from Germany were there, along with galoubet and racaille from France and occasional visitors from Greece, Spain, and China.  The whole world and his wife arrived at the ball. What a party, what a feast for the lovers of offal! Most people struggle with professor (I implore my students not to spell it with two f’s and one s) and occurrence (please, not occurance!) and put apostrophes between a noun and the plural ending (many book’s), but the stubborn losers, let alone the triumphant winner, know everything about brachygraphy, anaphylaxis, lysozyme, and chlothalidone.  My spellchecker says sternly: “Ignore all.”  Alas, the busy bees will ignore nothing: they will pounce on this carrion like vultures.  While getting ready for the competition, they could have learned a foreign language (French, German, or even Classical Greek), familiarized themselves with the Jugendstil, or read ten novels free of that abomination.  Instead they preferred to cram the most useless part of the dictionary for the ephemeral visibility, the “luminous bubble” of one day in the limelight and waste their best years chasing the drabbest rainbow in creation.  (“But what rubbish it all is!”  So Skeat on a different occasion at the end of the 19th century.)

All kinds of potentially dangerous things may be good in moderation.  A spelling contest within reasonable limits is a useful game.  Let those who have mastered the difference between principal and principle, realized that embarrassment has two r’s, while harassment has only one, and stopped writing definately, for they connected it with definition, be rewarded.  But to spell hypotrichosis correctly!  Words fail me.  Has anyone traced the career of the most successful bees?  What did they do with themselves?  How did participation in this pseudo-athletic event affect (affect, not effect) their lives, if at all?  Why shouldn’t someone get a grant and investigate?  I expressed here my personal disgust of the event, and, quite naturally, OUP bears no responsibility for and does not have to share my opinion.

Stress and distress. One of the unsung heroes of English etymology was James Platt, Jr.  Even Wikipedia does not have an entry on him, and yet he wrote countless short but excellent articles on the history of English words.  His command of the most difficult languages was astounding, and I always find his ideas useful.  In August 1898 he wrote: “Let us… take the Russian language, one of the half dozen chief languages of the world.  It is perhaps too much to hope that some day it will be taught in all our schools (yes, indeed); but at any rate it would be of very great use if the editors of our gazetteers and biographical dictionaries could acquire sufficient knowledge of this noble tongue (hear, hear!) to enable them to figure the correct pronunciation of its proper names.”  He showed how miserably unreliable Smith’s Cyclopaedia of Names was when it came to Russian.  Platt lived before radio was invented.  Today’s reference books are probably accurate, but why aren’t our announcers and other media personalities taught the right stress of Russian names?  Composers fare especially badly.  It should be  Balakirev, not Balakirev; Borodin, not Borodin; Glazunov, not Glazunov.  And of course, Gorbachev and Khrushchev, both rhyming with off, doff, cough.  Someone who can distinguish between present (noun) and present (verb) can surely master the pronunciation of Khrushchev with stress on the second syllable.

My explanation of habitus has been corrected somewhat: habitus is said to have been a noun, rather than a past participle. But I meant the origin rather than the functioning of the word.  In connection with habitus, I would like to mention three English nouns (I am sure there are more) that once were Latin verbal forms: ignoramus (the first person plural indicative; a word with a long and interesting history), plaudit (originally plaudite), from the second person plural imperative (plaudite “applaud ye!”), and debenture, from debentur, the third person present indicative passive plural of debere “to owe” (debentur).

It in games.  No one has responded to my query about the origin of It.  The word seems to be shockingly recent: no example in the OED preceding 1842.  The word was so little known that it did not make it to the dictionary’s first edition.  James A. H. Murray, a former school teacher dedicated to his work and the father of a huge brood, would have heard it (It) more than once in his life.  Couldn’t It originate from sentences with so-called dummy subjects like it rains, it snows?  This “impersonal” it has something in common with It in games, the child who is responsible for the progress of the action.  Or would a child playing tag “tig” another child and shout something like “That’s it!” (hence the name of the next chaser)?  Or are my fantasies totally groundless?

Wakie-wakie.  This case is even more surprising.  The word is said to go back to a military signal, and the OED gives no examples prior to 1941.  According to an Old Icelandic saga, the poet Thormothr (this is of course an Anglicized spelling) awakened the soldiers in King Olaf’s army in August 1030 with a poem recited in a loud voice.  It contained the words vaki æ vaki! (wake up, do wake up!).  No one would argue that a Scandinavian wake up signal had been current for a millennium before it was recorded in English.  But one does not often run into such cases of parallel development.

The joys of beating.  I have often referred to the unbelievable richness of English synonyms for “beat, thrash, trounce.”  Here is the most exotic one I have in my database.  It comes from Herefordshire, a county in the West Midlands of England: “I’ll give thee Jack-up-the-orchard” (1898).  Do the good people of Herefordshire read this blog?  If they do, can they tell us whether the phrase is still current there?

Read the next Gleanings on August 31.

Etymology gleanings for May 2019: Part 2