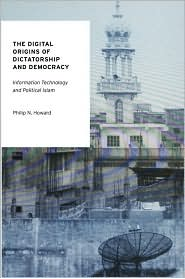 The Digital Origins of Dictatorship and Democracy: Information Technology and Political Islam

Political discontent has cascaded across North Africa and the Middle East. Entrenched dictators with decades of experience controlling political life have fallen or had to make major concessions. In the West, some observers discount the role of digital media in political change, others give it too much emphasis.

Digitally enabled protesters in Tunisia and Egypt tossed out their dictator. The protests in Libya have posed the first serious challenge to Gaddafi’s rule in decades and the crisis in that country is not over. Several regimes have had to dismiss their cabinets and offer major concessions to their citizens. Discontent has cascaded over transnational networks of family and friends to Algeria, Bahrain, Jordan, Lebanon, Saudi Arabia, and Yemen. Ben Ali ruled Tunisia for 20 years, Mubarak reigned in Egypt for 30 years, and Gaddafi has held Libya in a tight grip for 40 years. Yet their bravest challengers are 20- and 30-year-olds without ideological baggage, violent intentions or clear leaders.

The answer, for the most part, is online. And it is not just that digital media provided new tools for organizing protest and inspiring stories of success from Tunisia and Egypt. The important structural change in Mideast political life is not so much about digital ties between the West and the Arab street, but about connections between Arab streets.

But a reasonable foreign policy question remains. If digital media changes the political game in countries run by tough dictators, who will fall next?

The Algerian government has had to lift an incongruous 19-year “state of emergency” and are gearing for more demonstrations. Even in the constitutional monarchies there has been significant turnover in government Ministers and Cabinets in the effort to respond–or placate–citizens. In Bahrain, Jordan and Yemen, regimes have had to make concessions to activists with the newly found gall to protest openly. Last week, the Day of Rage in Saudi Arabia drew modest crowds, and Gaddafi began to retake ground. Still, women from a dozen Arab nations coordinated events to mark International Women’s Day, using digital media to call out record numbers of participants and advance a tech-savvy strategy for capturing news headlines.

It is pretty clear that digital media has had an important role in changing the system of political communication during sensitive moments in regime transition. Images of jubilant protesters in Tunisia inspired others across the region. Facebook provided an invaluable logistical infrastructure for the initial stages of protest in each country. Twitter fed people in country and outside with information about where the action was, where the abuses were, and what the next step would be.

From the point of view of social movement theory, digital media helped a peculiar group of people organize in a peculiar way. For the most part, the early days of protest in each country involved a disaffected, middle class of government workers, students, lawyers and entrepreneurs (not unions, urban poor, and radical Islamists). They organized relatively peacefully, and without clear leaders.

For some observers, the Arab Spring was an inevitable surprise. The rapid diffusion of digital media has been shown to have mostly positive consequences in many parts of the world, though often for different reasons. Both Egypt and Tunisia have more tech-savvy citizens then one would expect given their level of income. The other countries with an educated population and a small but tech-savvy community of student and civil society groups include many of the countries are still “in play”.

The modern recipe for democratization includes several key ingredients. Wired civil society groups have proven particularly agile at sensitive moments for regimes, particularly during rigged elections. Only the regimes made wealthy through oil and natural gas reserves have had the resources to keep civil society actors at bay in these critical moments. Several significant political transitions over the last 15 years fit this recipe, as do recent cases of Egypt and Tunisia.

Social scientists are loathe to predict, and rightly so. So instead of predicting political upheaval, it may be better to think about countries with the kinds of ingredients that go into the modern recipe for democratization. Jordan, Morocco, and Syria all have complex political histories and unique domestic profiles. They also have sophisticated, tech-savvy publics, economies not dependent on fuel exports, and regimes that may try to rig elections in the next two years. 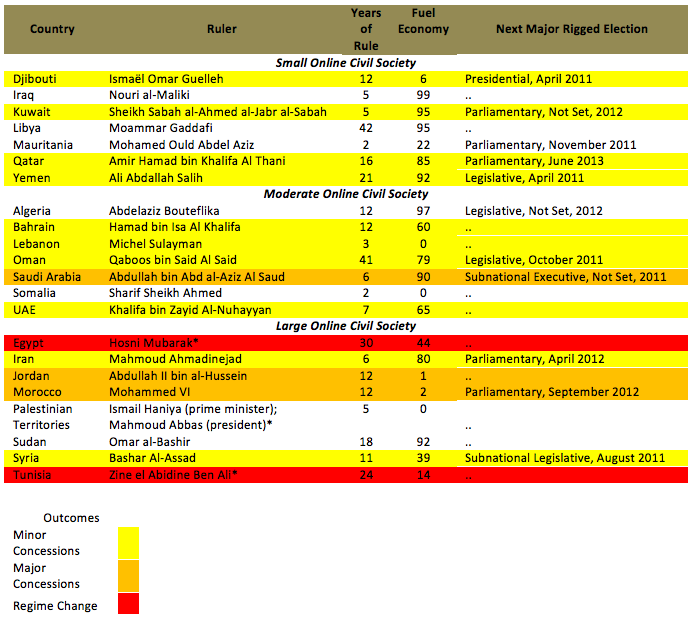 When and why does Islamic law oblige Muslims to fast?