With the Academy Awards right around the corner, we thought it might be fun to look at the lexical impact of films and some words that were actually coined by movies. Joining us for this Quickcast are two “excellent” members of the esteemed Oxford English Dictionary team.

Featured in this episode:

Lights, camera, lexicon: the language of films in the OED

Film, that great popular art form of the twentieth century, is a valuable window on the evolving English language, as well as a catalyst of its evolution. Film scripts form an important element of the OED’s reading programme, and the number of citations from films in the revised OED multiplies with each quarterly update. The earliest film cited in the revised OED, The Headless Horseman (1922), actually dates from the silent era (the quotation is taken from the text of the titles which explain the on-screen action), but most quotations from film scripts represent spoken English, and as such provide crucial evidence for colloquial and slang usages which are under-represented in print.

It is therefore no surprise that, although the films cited in OED represent a wide range of genres and topics, movies about teenagers are especially prominent. The film most frequently cited thus far in the OED revision, with 11 quotations, is American Graffiti, George Lucas’s 1972 reminiscence of coming of age in the early 1960s; second place is a tie between Heathers (1988), the classic black comedy of American high school, and Purely Belter (2000), a British film about teenagers trying to scrape together the money to buy season tickets for Newcastle United FC. But the impact of cinema on English is not limited simply to providing lexicographical evidence for established usages. From the mid-twentieth century, the movies as mass culture have actually shaped our language, adding new words to the lexicon and propelling subcultural usages into the mainstream.

The use of a word in a single film script can be enough to spark an addition to the lexicon. Take for instance shagadelic, adj., the absurd expression of approval used by Mike Myers in Austin Powers (1997), which has gained a currency independent of that film series, warranting its inclusion in OED in 2007.  A more venerable film-based coinage is twitterpated, adj. (love-struck, besotted; silly or scatter-brained), which was first heard in the 1942 animated feature Bambi.  Even where a particular usage exists prior to appearing in film, a prominent movie can catapult it into general usage. Would the term slacker n. (Additions, March 2001)—a member of a generation characterized by apathy, aimlessness, and lack of ambition—ever have achieved mid-1990’s ubiquity without Richard Linklater’s film of the same name?

Not every notable utterance in a film actually appears in the script. It is to the 1984 comedy Ghostbusters that we owe the menacing potential of the word toast, n.1 (Additions, December 2002). The memorable line, spoken by Bill Murray as he prepares to incinerate a baddie with a laser, is ‘this chick is toast.’ That line was ad-libbed; the closest thing in the script is the less memorable turn of phrase, ‘I’m gonna turn this guy into toast.’ A similar example may be found in OED’s entry for bada-bing, int. The first example researchers could track down of the headword form was the immortal line spoken by James Caan (as Sonny Corleone) in the Godfather (1972): ‘You’ve gotta get up close like this and bada-bing! you blow their brains all over your nice Ivy League suit.’ This, too, does not appear in the script, requiring OED to cite from a transcript of the film dialogue instead.

Continued: Read more on the language of films at OED.com 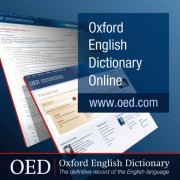 A linguistic League of Nations