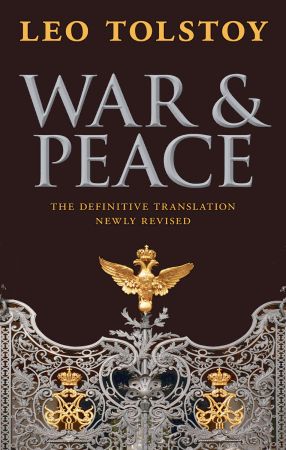 As we journey farther into the New Year, we’ve been reflecting on all the wonderful books published in 2010, and in doing so, we’ve also realized there are also some classics worth revisiting. The authors and friends of Oxford University Press are proud to present this series of essays, drawing our attention to books both new and old. Below, fellow publicist and Tolstoy fanatic Nick Mafi explains why you should add War & Peace to your 2011 reading list.

To further praise Count Leo Tolstoy’s monumental novel War & Peace is about as necessary as adding another Duane Reade in Manhattan.  But that’s still not going to stop me from telling you why you should must read my all-time favorite book this year.

Some argue that War & Peace could not have been written by one man alone.  Let it be known that Tolstoy was more than just a man; he came to be understood as a divinely driven figure.  It was as if God spoke through his pen, and used Tolstoy’s mind and body as His own personal pawn.  Once you enter the world of Tolstoy, he will hold you captive for the next 1,500 pages.  Tolstoy will lead you through arduous times of war, pastoral moments of peace, through battlefields, and ballrooms.  With the same stroke of genius, the Russian author will acquaint you with peasants working in the fields, and shortly thereafter seat you at a fine mahogany table, Napoleon to your left.  Undaunted by the task, Tolstoy took the whole world as his subject.  With a cast of over a 1,000 characters, War & Peace spans thousands of themes and revelations. It is precisely because of this fact that Tolstoy’s book will be perpetually modern and accessible in any time, and for any person.

It has been well recorded that Tolstoy’s wife, Sofia, edited over seven different copies of War & Peace; often taking illegible scribbles and turning them to working prose.  She often witnessed her husband break down into tears while writing.  Now, I don’t consider myself a cry-baby (insert John Boehner joke here) nor do I believe I lack emotion, but I have often been told by the finer sex that I need to show more sentiment while watching movies and television shows.  Sorry if I didn’t lose it when LC broke up on The OC or if the last contestant on America’s Got Talent actually found out they weren’t talented at all. I do, however, break down and cry for a number of sentimental things.  Whether it’s watching an old Muhammad Ali fight, the final scenes of Braveheart, listening to a John Lennon song, or the death of a loved one, rest assured tears will be flowing.  But nothing, absolutely nothing, has made me sob more passionately than War & Peace.  That’s the thing with this book, one becomes so emotionally attached to the characters that one feels as though they have lost their closest friend if any of them succumbs to an early death, or worse, a breaking of the heart.

War & Peace is not flawlessly written – Tolstoy will assuredly prove to you that nothing in life will ever be truly perfect – but it is the closest thing to perfect prose I have ever read.  Some may argue Shakespeare or Jane Austen take the higher ground in terms of style and structure, and honestly I am willing to concede that argument for sake of breath.  But for me, no other writer has reformed the way I viewed myself and the world around me more than the words of Tolstoy.  After reading War & Peace, you will instantly want to be a better brother, sister, lover, friend, son, daughter, mother, father, in a word, person.  He teaches you to be excited for love, and fearful of age; to be happy with youth and ultimately at peace with death.

Yes, the 1,500 page book can be quite intimidating.  But what’s more frightening: a large book, or the realization that death has no meaning within the context of life? If you get over your fear of the former, you will be more at ease with the latter.  So give the book an honest try.  With the utmost confidence I can sincerely say, at the very least, this book will change your life.  This is my promise.