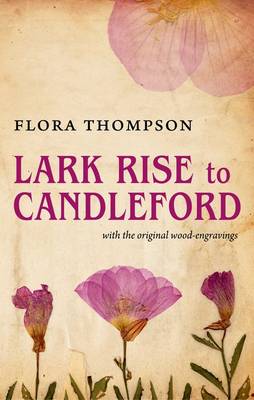 Lark Rise to Candleford is Flora Thompson’s classic evocation of a vanished world of agricultural customs and rural culture. The trilogy of Lark Rise, Over to Candleford, and Candleford Green tells the story of Flora’s childhood and youth during the 1880s in Lark Rise, in reality Juniper Hill, the hamlet in Oxfordshire where she was born. Below is an excerpt from Phillip Mallett‘s introduction to our new edition of Lark Rise to Candleford. Fans of the BBC adaptation will be pleased to know that a new series starts in the UK on BBC One this Sunday, 9 January.

Lark Rise to Candleford belongs to a rich tradition of English memoirs, essays, and journals about the countryside. This is a tradition in which one can detect two impulses, at variance with each other but often to be found side by side. One is ostensibly historical, or documentary. Its ambition is to report on the condition of rural England, and its concerns are correspondingly specific: absentee landlords, the kind and quality of the crops, the working of the Enclosure Acts. William Cobbett’s Rural Rides, published in the Political Register from 1821 to 1826, might be taken as its exemplar. The other is imaginary, or mythical, though it rarely confesses itself so. It invests equally in the countryside as the home of virtue and independence, typically in contrast with the corruption of the city, and in the restorative power of landscape itself. It conjures an ideal England, sometimes envisaged as a project for the future, but more often found in an earlier Golden Age, when people lived in rhythm with the land and the seasons. Lark Rise to Candleford can be and has been recruited for both aspects of this tradition, as an authentic record of a way of life which in the 1880s stood on the brink of modernity, already vanishing and now vanished, and as an example of the nostalgic strain in ruralist writing, which harks back to a time when men and women were happier, and perhaps better. It is worth considering a little more closely just where Thompson stands.

The myth of Rural England as the wellspring of national greatness, and true guardian of the traditions of the race, took on new urgency in the closing decades of the nineteenth century, amid widespread fears of urban degeneration and industrial and imperial decline. In varying degrees it contributed to the foundation of the National Trust in 1895, Edward Hudson’s magazine Country Life (1897), the Arts and Crafts Movement, Gertrude Jekyll’s cottage gardens, and the music of Vaughan Williams. Its most forthright expression came in Stanley Baldwin’s address to the Royal Society of St George in May 1924, in the brief interval between his first two periods as Prime Minister: ‘To me, England is the country, and the country is England. And when I ask myself what I mean by England, when I think of England when I am abroad, England comes to me through my various senses—through the ear, through the eye, and through certain imperishable scents.’ The images he calls to mind are still reassuringly familiar, even to those who have known none of them directly: the sounds of hammer on anvil and scythe on whetstone, a plough team coming over the brow of a hill, the smell of wood smoke from autumn fires. ‘These things strike down into the very depths of our nature.’ They have made the English what they are: not an intellectual race, admittedly, but one untroubled by modern ‘nerves’, reticent in speech yet with a literature second to none; marked by their ‘staying power’ (as Thompson puts it in Lark Rise, recalling the boast of labourers and their wives, when once they begin a course they don’t ‘flinch’); and penetrated by ‘the love of home’, which by a strange logic leads them overseas, to build new homes in the Dominions (as some ten million Britons had done in the previous half-century, and Thompson’s eldest son Basil was soon to do, leaving for Australia at the age of sixteen).

There are several curious aspects to this speech. Baldwin, the son and grandson of an ironmaster, understood perfectly that England had been a mainly urban nation since 1851 (according to the census returns of that year), and an industrial one for still longer. Home for most English men and women in 1924 was not a cottage with a garden but a terraced house in the great cities, at best a new-built villa boasting ornate iron railings and ‘a smart front door with a brass knocker’: the sort of house, reflects Laura, which marks the transformation of Candleford Green from village to suburb. Moreover, the ‘country’ Baldwin evokes is at once unspecific and selective, excluding the Yorkshire moors, the crags and lakes of Cumbria, the East Anglian fens and the Atlantic coast of Devon and Cornwall. Regional and topographical differences are elided, to allow a unified landscape to stand as an emblem of national continuity. For Baldwin, as for most other writers in the rural tradition, it would be truer to say that England is The South Country, the name given by Edward Thomas in 1909 to the land between Kent and Wiltshire, but the actual terrain is less important than the imaginative cartography of an undulating landscape, mainly arable, dotted with woods, criss-crossed with hedges, with village greens to sit by, lanes to wander in, and pools to gaze into. Easily identified with ‘Nature’, it is in fact the result of centuries of cultivation, and in particular of the numerous Enclosure Acts of the late eighteenth and earlier nineteenth centuries. To the poet John Clare, the hedges in his native county of Northamptonshire—also absent from Baldwin’s ‘England’—were a modern and unnatural imposition, dividing the landscape into ‘little parcels’ to please the ‘little minds’ of its new owners (‘The Mores’, 1812–31).

Unlike many of her contemporaries, Thompson has little to say of Nature with a capital ‘N’. It is the detail of the natural world, the more or less minute, which preoccupies her. Laura cannot remember a time when she and her brother had to ask the names of birds, trees, and flowers. This knowledge, unconsciously acquired, rings with authenticity. The local names have a poetry of their own: ‘eyebright and harebell, sunset-coloured patches of lady’s-glove, and succory with vivid blue flowers and stems like black wire’; ‘peppermint, pennyroyal, horehound, camomile, tansy, balm, and rue for physic’. Each hedgerow has its speciality: ‘honeysuckle, crab apples, misty purple sloes, or long trails of white bryony berries through which the sun shone crimson as it did through the window at church’. But that resonant last phrase is not the prelude to a mystical communion with Nature on the grand scale, as in W. H. Hudson’s Hampshire Days (1903), or Richard Jefferies’s The Story of My Heart (1883): ‘I hid my face in the grass . . . I felt down deep into the earth under, and high above into the sky, and farther still to the sun and stars. Still farther beyond the stars into the hollow of space, and losing thus my separateness of being came to seem like a part of the whole.’ The closest Laura comes to this is during the fit of depression which descends on her in the chapter ‘Growing Pains’. The beauty of the natural world on a dull November day lifts her spirits, yet it is precisely the smallness of the scene, ‘so commonplace and yet so lovely’, which delights her: the little brook, its brown water flecked with cream-coloured foam, the ‘fresh green moss, the glistening ivy, and the reddish twigs with their sparkling drops’. Literally down to earth, her response is not to identify with the sun and stars, but to laugh at the egotism which had magnified her problems: ‘What a fool she had been to make so much of so little’. When she does raise her eyes to take in a panoramic view, it is ‘acres upon acres of golden corn’ which satisfy her spirit: ‘There is both beauty and bread and the seeds of bread for future generations’. Bread and beauty matter more to Thompson than the drama of the individual ego.