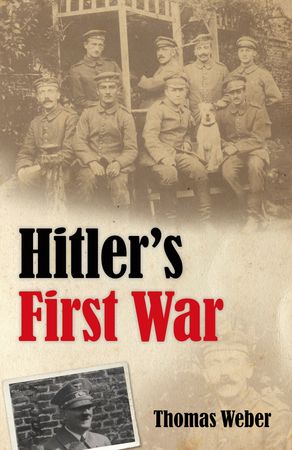 Finally the breakthrough came: I had identified beyond doubt the anonymous author whose 1932 newspaper article attacked full on Hitler’s account of his First World War years.

For two years I had been working through pile after pile of archive documents in Bavaria, Northern France, the U.S., and Israel. As I did so, it had become increasingly clear to me that Hitler’s own version of his war experiences – which had never seriously been challenged by Hitler’s many biographers – were close to fictional. An anonymous 1932 newspaper article was a key document that undermined Hitler’s account; but historians had long dismissed it as a desperate attempt by his political opponents to derail his career with made-up allegations about his war record. To me, though, it increasingly had the ring of truth; but the word ’anonymous’ really did make it unusable.

My research already meant I could prove that a huge gulf existed between Hitler’s claims and the reality of how most of the men in his unit actually experienced the war. I had enough evidence to lift the cloud of secrecy that Nazi propagandists had put over Hitler’s war years. Enough to develop my argument that Hitler was, in fact, not ‘made’ by the First World War, that he returned from the war still a man with fluctuating political ideas of the Left and Right, and that lying about his war years was central to his rise to power. But I did not want to go public with an argument that was essentially ‘suggestive’, however persuasive it might be. I wanted to identify the author of the newspaper article that was so critical of Hitler’s version of his war tales, and to show that the author knew exactly what he was talking about.

And then finally, one day, as I sat in the Bavarian War Archive in Munich, I realised that I had got there. As I weighed up all the clues about the author I had extracted from the newspaper article – his rank, the region he came from, and the time he joined up – and tested them rigorously against the officer files of Hitler’s Regimental Archive, just one officer fitted the bill: Korbinian Rutz, Commander of 1st Company, in which Hitler had served. And what was more, Rutz had started the war in the same role that Hitler would fill for its entire duration – a dispatch runner.

I felt ecstatic. I finally had the proof that all the accusations which had been dismissed as fabrications by historians to date indeed originated in a soldier from Hitler’s regiment. And not just any soldier, but one who knew what it meant to be a dispatch runner in the Regiment and who had encountered Hitler during the war.

It did not take me long before I found many other ‘smoking guns’ that revealed what Hitler did not want us to see of his war years. For instance, one day, as I was checking the names of hundreds of veterans of Hitler’s regiment against the Nazi Membership files in the U.S. National Archives in College Park, MD, I browsed through a collection of miscellaneous letters sent to Hitler from the Nazi Party archives. Suddenly I had in front of me a letter written to Hitler in 1932 by one of his peers from the support staff of regimental HQ reminding him that the frontline soldiers of their unit had indeed looked down at them as ‘rear area pigs’.

A chance chat with a local archivist from a small Bavarian town, meanwhile, helped me to find the great-granddaughter of Jakob Weiss, one of Hitler’s closest peers from the war. A postcard sent to Weiss in 1934 by the wife of another veteran confirmed that a great number of the veterans of Hitler’s regiment cold-shouldered Hitler even after he had come to power.

Then in spring 2010, through sheer serendipity, I finally found the family of Hugo Gutmann, the regiment’s highest serving Jew, who I had been trying to find for years. The ‘Postscript’ to my book tells his story and confirms that some of the Jews of Hitler’s regiment were integrated and accepted by the men of the unit in a way that had never been true for Hitler himself.

And the story continues. Just last month, in response to pre-publication news stories about the book, the son of a Jewish soldier from Hitler’s regiment living in Israel contacted me and sent me the recollections of his father. Again they confirmed Rutz’s and Gutmann’s observations about the making of Adolf Hitler, and the relative lack of tension between Jews and non-Jews in Hitler’s regiment.

Was Hitler a hero of his Regiment? No. Was anti-Semitism rife in the Regiment? No. Did his fellow soldiers support his rise to power? In the large majority, No. Discovery after discovery confirmed that the received wisdom was wrong.

This article is reposted with permission from the BBC History Magazine/Oxford University Press microsite. Thomas Weber teaches European and International History at the University of Aberdeen. His award-winning book The Lodz Ghetto Album examined the notorious photographic record of the Polish ghetto. His latest book is Hitler’s First War, which overturns the received wisdom about Hitler and the List Regiment.

Air Power: how aerial warfare has changed and remained the same