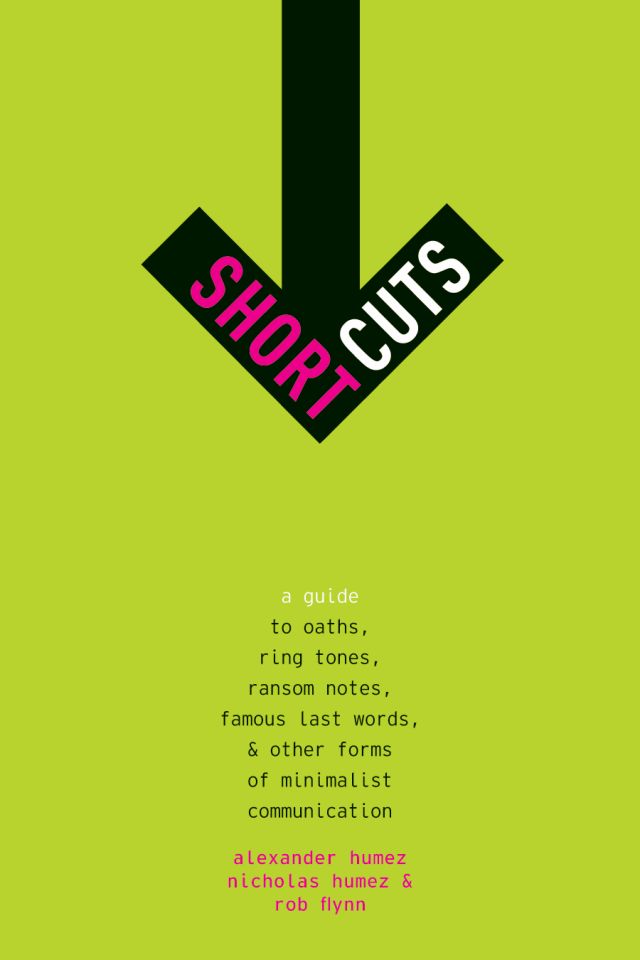 
Largely gone from the funny pages but alive and well on the rear bumper of the car, the rebus is a visual puzzle that, in its various forms, encapsulates the history of alphabetic writing from ideograms (pictures designating concepts or things) to pictographs (pictures representing specific words or phrases) to phonograms (pictures representing specific sounds or series of sounds). Dictionaries struggle to define the term in such a way as to capture the range of shapes a rebus can take, typically focussing on its pictographic and phonogrammic attributes, forgoing mention of the ideographic. For example, the OED defines rebus as “a. An enigmatical representation of a name, word, or phrase by figures, pictures, arrangement of letters, etc., which suggest the syllables of which it is made up. b. In later use also applied to puzzles in which a punning application of each syllable of a word is given, without pictorial representation.”

The origin of the word is a matter of some debate (nicely summarized by Maxime Préaud in his “Breve histories du rebus francis” and treated at greater length by Card and Margo lin in their Rebus de la Renaissance: Des images quai par lent), but whatever its pedigree, the thing itself has been a popular item since at least the end of the fifteenth century. In his treatise on orthography of 1526 (Champ Fleur), Geoffroi Tory notes the practice of “jokers and young lovers” who make up “devices,” such as a small a inside a large g to signify “Jay grant appetit,” that is, “g grand a petit,” which he decries because, he says, such practices often result in sloppy penmanship and pronunciation. After giving a few more examples of “devices” made up of letters, he goes on to say that there are devices that aren’t made up of “significative letters,” but, rather, are made up of “images which signify the fantasies of their Author, & this is called a Rebus,” of which he describes (but does not depict) some examples.

An elaboration of the all-character rebus is exemplified by the following, the first in English, the second in French (cited by Estienne Tabouret des Accords in his Les Bigarrures et Touches du Seigneur des Accords—roughly, ‘Lord des Accord’s Medley of Colors and Dabs’—which appeared in several editions in the late 16 th century):

(“I am overworked and underpaid”) and

sous tint, i.e., “Le souhait en suspens le coeur soutient” ‘Hope in abeyance the heart sustains’), a rather cryptic message notable for its early use of the pictographic heart.

The heart as an ideogram denoting a general feeling of warmth and fuzziness is if not universal as near as no matter. Consider the following, seen on many a car bumper:

(“I love my dog”) or its synecdoche variant

—could be taken to be a deliberate antisemitic slur meaning something like “Kill the (New York City) Jews.” (Jillette pointed out that this pseudo-rebus could just as well be read as “Jewish people make really good pesticides.”)

But back to the enigmatic expression of love for man’s best friend. For some reason, “I love my dog” never seems to appear (although it could) as

Nor have we seen the equally possible

where the pictograph consisting of a microphone (mike) minus the letter K represents the syllable otherwise spelled by the letters MY, let alone

And if you don’t like dogs? Here are a couple of possibilities:

on the analogy of

or the more recent

We are not likely to see multiple-hearted bumper stickers in the case of quintuplets (or polygamists). Nor are we likely, for somewhat different reasons, to encounter the following graphic expression of philocyny or misocyny:

as that would get us into the realm of morphophonemics—S is a grammatical marker here whose phonetic realization in the current context should be [z], not [s]. But if you are close enough to read this, you should be driving in the parsing lane.

Alexander Humez is the co-author of Short Cuts: A Guide to Oaths, Ring Tones, Ransom Notes, Famous Last Words, and Other Forms of Minimalist Communication with his brother, Nicholas Humez, and Rob Flynn. The Humez brothers also collaborated on Latin for People, Alpha to Omega, A B C Et Cetera, Zero to Lazy Eight (with Joseph Maguire), and On the Dot. Click here to take the -nym quiz from Humez’s previous blog post.