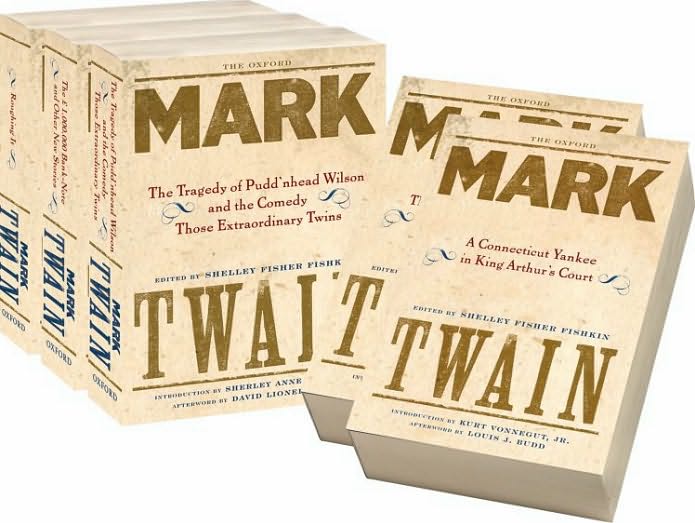 Shelley Fisher Fishkin, Professor of English and Director of American Studies at Stanford is editor of the 29-volume Oxford Mark Twain, and of The Mark Twain Anthology: Great Writers on His Life and Work (The Library of America), on which the comments that follow are based.  She is also the author of From Fact to Fiction: Journalism and imaginative Writing in America, Was Huck Black? Mark Twain and African American Voices, Lighting Out for the Territory: Reflections on Mark Twain and American Culture, and A Historical Guide to Mark Twain.  We asked Fishkin to contribute to the blog in honor of the centennial of Twain’s death.

Ernest Hemingway said in 1935 that “All modern American literature comes from one book by Mark Twain called Huckleberry Finn.” But these days, as scholars increasingly focus on transnational dimensions of American culture, perhaps it’s time to look at Twain’s impact on writing outside of America, as well. The fact that this year marks the centennial of Twain’s death, the 175th anniversary of his birth, and the 125th anniversary of the U.S. publication of his most celebrated book makes it a perfect time to widen our angle of vision.

If we set out to look for an American author most likely to achieve a world readership, we would be hard-pressed to find a less promising candidate than Mark Twain at the start of his career. The dialect and slang that filled the title story of first book, The Celebrated Jumping Frog of Calaveras County and Other Sketches, struck some early foreign readers as impenetrable. And if they found the dialect and slang of Twain’s first book hard to understand, the insults he hurled at them in Innocents Abroad were, as one German writer put it, “unforgivable.” But Twain broke out of the mold with such original freshness that many Europeans who justly could have been offended were intrigued instead. Indeed, I’ve determined that the first book published anywhere on Twain was published in French in Paris in 1884 by a 24-year-old Frenchman named Henry Gauthier-Villars, where he wrote, “Hello then, charming writer with no model or imitator! I bid you welcome among us, newcomer with endless verve; the sound of the hurrahs you have raised has already crossed the ocean. We have been waiting for you…” (Gauthier-Villars would later be best known as the rather infamous first husband of the woman he met five years after he published his book on Twain, a young French woman who would become famous as the writer Colette.)

Writers the world over marveled at the art Twain wrought from the speech of ordinary people–speech whose previous appearance in literature had most often been treated with ridicule. Jorge Luis Borges, who believed that Huckleberry Finn “taught the whole American novel to talk,” observed that in Huck Finn “for the first time an American writer used the language of America without affectation.” Borges believes Twain’s novel to be the progenitor of two other works of world literature, Ricardo Güiraldes’ Don Segundo Sombra, and Rudyard Kipling’s Kim. Twain’s dazzling experiments with the vernacular helped inspire writers around the world to create art out of the language spoken by their countrymen–writers like Johannes V. Jensen, considered the first great modern Danish author, who went on to win the Nobel Prize for literature.
I heard Japanese Nobel Laureate Kenzaburo Oe give a speech in Austin, Texas in 1996, in which he described how his mother had bartered some rice to procure a copy of Huckleberry Finn for him in war-torn Japan, carefully instructing him to tell his teacher, if she asked, that “Mark Twain” was the pseudonym of a German writer. That evening in Austin he spoke of the book as having had a profound affect on his response to the United States. But when I read his first novel, The Prize, or The Catch, the unmistakeable resonances with Huckleberry Finn that I spotted had persuaded me that the Twain’s novel had shaped more than his attitude toward my country: I suspected that it had had an important impact on Oe’s development as a writer, as well. At a reception after his talk I asked him whether his first novel was responding directly to Twain’s most famous novel. Oe beamed and a long conversation followed. He then wrote in my copy of his latest book that I had brought for him to sign, “Yes, I agree with your opinion about Huck, the narrative of my first novel is under the shadow of Huck.” The Japanese scholar Shoji Goto “has suggested that since Oe’s works have had a tremendous impact on postmodern Japanese literature,” Huckleberry Finn, through Oe, has played an important role in the development of that literature as well.

Twain’s other works shaped world literature, too. Joseph Conrad often thought of Life on the Mississippi when he was in command of a steamer in the Congo and stood straining in the night looking for snags, while Borges used it as a source for the book in which he made his debut as a storyteller. José Martí was so impressed by A Connecticut Yankee in King Arthur’s Court that he announced in an Argentine newspaper in which he reviewed the book that he wanted to go to Hartford to shake Mark Twain’s hand. He recognized Twain as a kindred spirit who, like Martí, rejected the claims of aristocracy to deference and legitimacy, abhorred injustice and sympathized with the downtrodden and disempowered. Martí who would entitle his most widely reprinted essay “Nuestra América,” or “Our America,” referred to the author of Connecticut Yankee with affection, one year earlier, as “Nuestro Mark Twain,” or “Our Mark Twain.”

The Yiddish writer Maks Erik argued that Sholem Aleichem drew inspiration in one of his key books from Tom Sawyer. In a speech he gave in Beijing in 1960 on the 50th anniversary of Twain’s death, the great Chinese writer Lao She showed himself to be a careful and appreciative reader of Twain, familiar with the full range of Twain’s writings. But scholars have yet to investigate what China’s most celebrated humorist and satirist have learned from Twain.

Twain’s works have been translated into over 75 languages, and editions have been published in virtually every country in which books are printed. But we have only just begun to probe the ways in which his work shaped writing in many of these languages around the world. A good project for the 21st century!