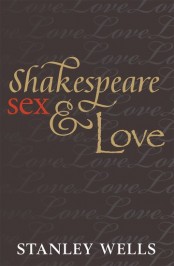 With news coming over the last day or so that a ‘lost’ play by Shakespeare called Double Falsehood is to be published, I thought that today would be the perfect time to give you a little taster of a new book of ours that is publishing in the UK in a couple of weeks. Shakespeare, Sex & Love is the latest book by the pre-eminent Shakespearian critic Stanley Wells, Chairman of the Trustees of Shakespeare’s Birthplace and Emeritus Professor of Shakespeare Studies at the University of Birmingham. In it, Wells examines how Shakespeare portrayed sex and love in his writing and how this was shaped by the sexual conventions of his time. In the short excerpt below you can read about how sexual behaviour was implicitly recorded in public records.

It is in the nature of things that sexual behaviour that does not offend agreed norms makes no special stir. Even so it may be revealing. People masturbate, woo, marry, copulate, and give birth. Of these events the law requires only that marriages and, in Shakespeare’s time, baptisms rather than births be recorded. Analysis of such records may in itself illuminate the sexual mores of the period and, indeed, of Shakespeare and his family. We know, for example, that between 1570 and 1630 the average age for first marriage among men in Stratford-upon-Avon, calculated on the basis of 106 known cases, was between twenty and thirty, though legally they could marry from the age of fourteen, with the ‘greatest number of marriages (fifteen) taking place when the bridegroom was twenty-four’. There was a practical reason for this: it would have given time for the men to have ‘become settled in work at the expiry of their apprenticeship’, which normally lasted for seven years. On the other hand, women by and large married younger: though the average age of brides at first marriage, based on sixty known cases, was also twenty-four, the favoured ages were ‘either seventeen or twenty-one’. The youngest bride married at the age of only twelve—the earliest legal age for a woman, younger even than Shakespeare’s thirteen-year-old Juliet—though she did not have a child until she was sixteen, which may (or may not) mean that the marriage was not initially consummated. ‘The men of Stratford’, we learn, ‘rarely looked farther afield than the outlying hamlets of the parish and, provided it was agreeable to the family, their choice usually seems to have been dictated by mutual attraction. Arranged marriages were only for the rich.’

Marriage is not a prerequisite for births, and records of baptism sometimes reveal sexual irregularity, as in the entry in the Stratford register on 5 May 1592 of the birth of ‘John, son of Katherine Getley, a bastard.’ There is a slight Shakespeare connection, as the mother’s father owned the cottage in Chapel Lane, close to Shakespeare’s house New Place, and which Shakespeare bought in 1602. In this case the simple entry in the parish register can be supplemented with legal evidence. Five months later Katherine and a man named William Sanford were called to court—but failed to appear—on a charge of fornication. After failing to turn up on a second occasion they were excommunicated. This information comes from the Act Books of the Ecclesiastical Court, popularly known as the ‘Bawdy Court’ because it dealt with sexual (as well as many other) offences. Only in 1964 did it become known that substantial records of this kind for Stratford survive, in, as it happens, the Kent Archives Office. They provide much information pertaining to sexual offences in Stratford. One of the most frequently named of them is ‘incontinency’, which seems to refer to either premarital or extramarital sex. In As You Like It Rosalind envisages the possibility that love at first sight will lead to incontinency: ‘your brother and my sister no sooner met but they looked; no sooner looked but they loved; no sooner loved but they sighed; no sooner sighed but they asked one another the reason; no sooner knew the reason but they sought the remedy; and in these degrees have they made a pair of stairs to marriage, which they will climb incontinent, or else be incontinent before marriage’ (5.2.31–8)—as of course Shakespeare, whose first child was born 6 months after his marriage, was.

Records of burials as well as births may inform us about sexual behaviour. The most conspicuous example of this in relation to the Shakespeare family is found not in Stratford records but in the parish registers of St Giles, Cripplegate, in London. Shakespeare had a brother named Edmund, sixteen years younger than himself. The registers tell us that a base-born—illegitimate—child named ‘Edward, son of Edward Shakespeare, player’ was buried on 12 August 1607. The names Edward and Edmund were often confused, and the child’s father was probably the ‘Edmund Shakespeare, a player’ who was buried across the river at St Saviour’s, Southwark—now Southwark Cathedral—on the last day of the same year ‘with a forenoon knell of the Great Bell’ costing a pound and paid for, presumably, by his prosperous brother. Nothing whatever is known of the child’s mother, and indeed this is almost all we know of his father. It seems ironical that, not long before this, Shakespeare had given his name to the Bastard in King Lear.

And thus Zoom turns us all to fools and madmen