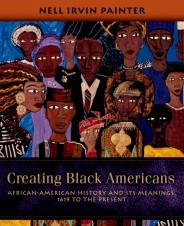 Creating Black Americans: African-American History and Its Meanings, 1619 to the Present

The following is an excerpt from Creating Black Americans: African American History and Its Meanings, 1619 to the Present by Nell Irvin Painter.

Slaves retained their humanity thanks to the support of families and religion, which helped them resist oppression. Nonetheless, slavery was a dehumanizing institution. Assaults on the bodies and minds of the enslaved exposed them to trauma that was both physical and psychological.

By the end of the eighteenth century, branding, amputation, and other extremely brutal forms of punishment became rare as means of controlling slaves. But beating continued, causing slaves’ most catastrophic physical and psychological trauma. Every ex-slave narrative includes scenes of physical torture inflicted by owners (female as well as male), overseers, and fellow slaves forced to administer their masters’ punishments. The narratives also comment on the emotional pain of parents, children, and spouses, forced to watch their kin being beaten. Artists have depicted the physical torture of slavery in countless images, such as “Slave Lynching” by Claude Clark (1915–2001). The enslaved woman’s nakedness before a crowd of onlookers adds further humiliation to the physical pain of the beating.

In addition to physical injury caused by beating, slaves suffered from the chronic conditions caused by overwork, scanty rations, and insufficient clothing. Frederick Douglass recalled going barefoot and ill clothed all winter and suffering from frostbite as a child. Stealing food to stanch constant hunger earned many a slave a whipping. Years of hard work, often in swampy conditions, left their signs within slaves’ bodies. The skeletons of enslaved children and adults working in eighteenth-century New York City bore the traces of lesions denoting excessive, repetitive stress. The remains found in the African burial ground in lower Manhattan indicate that about 50 percent of New York’s colonial Africans died before the age of twelve, and 30 to 40 percent of those children died in infancy. Many of the 40 percent of the skeletons in the burial ground belonged to preadolescent children and show the thickening of the skull associated with anemia and osteomalacia (weakening of the bones due to poor diet and nutrition). The skeletons’ enlarged muscle attachments are attributable to the heavy loads children were forced to carry. The skeletons also show signs of arthritis in the neck bones and lesions on the thighbones from muscle and ligament tears, caused by carrying heavy loads.

Slaves and, to a certain extent, their owners paid the psychological costs of a society based on violence, obedience, and submission. As the slave Isabella in the Hudson River Valley, Sojourner Truth neglected her own children to work for her owners, including their children. “No Mommy Me (1)” by Joyce Scott (b. 1948) captures the tragedy of the neglected black child. While the mother plays with the white child in her charge, her own child, disregarded, clings to her skirt. Slave owners placed great value on slaves’ demeanor, which was to remain cheerful and submissive at all times. Above all, slaves were not to appear to be thinking for themselves or to display the anger inevitably flowing from physical violence, whether being beaten oneself or witnessing someone else’s torture. The signs of this repressive regime appeared in advertisements for runaway slaves. Slaves were described as stutterers, as people who always looked down, who seemed depressed, who drank liquor excessively, who alternated between periods of withdrawal and outbursts of fierce, uncontrollable rage.

Some slaves suffered from what is now termed post-traumatic stress syndrome, and some inflicted their pain on their kin. But every slave was vulnerable psychologically, and every slave was at risk of falling victim to psychological trauma. The enslaved bore the brunt of emotional pain, but their owners did not escape unscathed.

Whites as well as blacks noticed slavery’s detrimental effects on white people. Thomas Jefferson could only speak vaguely of “odious peculiarities.” Mistresses and slaves spelled out the evils, physical and emotional: Absolute power over other people bred sadism; absolute power over other people also bred sexual abuse. The rape of slave women translated into the pain of adultery for mistresses. Harriet Jacobs, herself the sexual prey of her middle-aged master when she was less than fourteen, summed up slavery’s costs to white families: “I was twenty-one years in that cage of obscene birds. I can testify, from my own experience and observation, that slavery is a curse to the whites as well as to the blacks. It makes the white fathers cruel and sensual; the sons violent and licentious; it contaminates the daughters, and makes the wives wretched. And as for the colored race, it needs an abler pen than mine to describe the extremity of their sufferings, the depth of their degradation.”

Slavery cost slaves income and wealth. They made no wages, although some masters paid bonuses as incentives for good work. Lacking wages, slaves could not save. Slaves had no legal right to hold property, and without wages, they were seldom able to accumulate property. As in the case of wages, some masters offered favored slaves the use of property. Sojourner Truth’s parents, for instance, lived in a cottage they considered their own and kept a garden they considered theirs. But possession remained strictly contingent upon the owner’s pleasure. Slaves had no rights in such property and could not pass on cottage or garden to their children. Without wages, savings, or property, Africans and their descendants could not send money back to their African villages of origin, as did millions of immigrants from Asia and Europe.

Educating slaves in or out of school was illegal in the nineteenth-century South, but not in the North and West. Nonetheless formal education remained outside the reach of most African Americans for several reasons beyond their enslavement. Few black people, slave or free, were allowed in schools; rural areas offered schooling to almost no one, for poor children of all races and ethnicities were destined for the workforce, not the schoolroom. A small minority of the enslaved did learn to read, write, and figure. Often their owners, particularly their mistresses (as in the cases of Frederick Douglass and Harriet Jacobs) helped bright slave children learn their letters. Owners also valued the assistance of slaves who could read or keep accounts. Upgrading one’s skill, however, rewarded the owner far more than the slave.

Because slaves could not change employers of their own volition, they could not use the skills they acquired to better their situation by finding improved working conditions or jobs that paid more. They could not work their way up or purchase a share in their business. Closely supervised, they seldom exercised control over their working conditions. Although slaves lacked unions and therefore lacked grievance procedures, they sometimes successfully appealed overseers’ orders to their owners. Appeals could go no higher than the master, for masters exercised powers directly on their farms, plantations, and households and indirectly through slave patrols on the roads and other public places. In the South, local governments nearly always deferred to owners, who exercised police power over the land and people they owned.

The combination of physical violence and the requirement to remain cheerful before one’s owners bred habits of deceit and anger that turned against oneself and one’s own family. Child and spouse abuse were constant dangers in Southern families. One of the most famous works of the late nineteenth-century black poet Paul Laurence Dunbar (1872–1906) commemorates the need to conceal emotions: “We Wear the Mask.”

We wear the mask that grins and lies,
It hides our cheeks and shades our eyes,—
This debt we pay to human guile;
With torn and bleeding hearts we smile,
And mouth with myriad subtleties. . . .

Nell Irvin Painter is the Edward Professor of American History at Princeton. A former Director of Princeton's Program in African-American Studies, she is the author of Creating Black Americans: African-American History and Its Meanings, 1619 to the Present; Sojourner Truth: A Life, A Symbol; Standing at Armageddon: The United States 1877-1919. Read Nell Irvin Painter's essay on the difficulty of tracking down the artwork in Creating Black Americans at Beatrice.com.