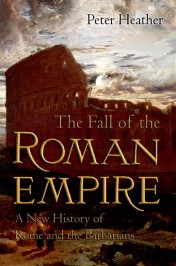 The Fall of the Roman Empire: A new history of Rome and the Barbarians

As promised, here is ‘part two’ of the dialogue between Bryan Ward-Perkins and Peter Heather, colleagues at Oxford University and the authors of two recent books on the collapse of the Roman Empire; The Fall of Rome: And the End of Civilization and The Fall of the Roman Empire: A New History of Rome and the Barbarians, respectively. Today they discuss the consequences of ‘the fall’ on western Europe and why they both decided to write about the fall of Rome at the same time. You can read the first part of their discussion by clicking here.

How important was the fall of the Western Roman Empire, in terms of its consequences for the history of Europe?

Ward-Perkins: Peter is primarily a historian of the state and of the army, while my background and intellectual roots are mainly in Archaeology; so our approaches to this question inevitably do differ. Peter prioritizes the collapse of a great power, in terms of its political and social consequences – above all, how landed aristocrats, once operating within a finely tuned and empire-wide system of patronage and status, had to adjust to life under heavily militarized and locally-based Germanic kings.

My book, and this is its major novelty, concentrates on the impact of the fall of the West on daily life, as revealed by a mass of new archaeological research over the last few decades (which I hope is presented in a readable and approachable manner). I argue what is currently an unfashionable view (though, in my opinion, it is blindingly obvious) – that the Roman world brought remarkable levels of sophistication and comfort, and spread them widely in society (and not just to a tiny elite); and that the fall of Rome saw the dismantling of this complexity, and a return to what can reasonably be termed ‘prehistoric’ levels of material comfort. Furthermore, I believe that this change was not just at the level of pots and pans, important though these are, but also affected sophisticated skills like reading and writing. Pompeii, with its ubiquitous inscriptions, painted signs, and graffiti, was a city that revolved around writing – after the fall of the empire, the same cannot be said for any settlement in the West for many centuries to come.

I recommend caution in praising ‘Civilizations’ (whether Roman, or our own), and I do emphasize that ‘civilizations’ have their downsides. But, equally, I think the current fashion for treating all cultures as essentially the same – and all dramatic changes (like the end of the Roman world) as mere ‘transformations’ from one system, to another equally valid one – is not only wrong, but also dangerous. It evens out the dramatic ups and downs of human history, into a smooth trajectory. This risks blinding us to the fact that things have often gone terribly wrong in the past, and to the near certainty that, in time, our own ‘civilization’, and the comforts we enjoy from it, will also collapse.

Heather: I never know, really, how to judge good & bad in global terms when looking at any societies. I am very sure, though, that the effects of Rome’s fall were huge and felt right across the board. It’s quite common now, for instance, while describing the history of subjects as diverse as Christianity or literacy in this period, to view Rome’s fall as incidental or unimportant. In my view, that is straightforwardly wrong. Late Antique Christianity evolved a series of authority structures, both centrally and locally, which were shaped around and based upon the existence of the Roman state. When that went, these authority structures, even when they survived, changed their nature fundamentally. In shorthand, the medieval monarchical Papacy is inconceivable had powerful western Emperors survived. So too literacy. Patterns of elite literacy, for instance, were based upon the career structures generated by the Empire’s bureaucracy – lots of jobs for those knowing a particular kind of Latin well – and once that bureaucracy went, so did the jobs and the patterns of education and literacy attached to them.

Why two books on the ‘Fall of Rome’ now?

Ward-Perkins: Even curioser, both books are by scholars from the same university who know each other well. A number of potential explanations spring to mind. Firstly, that the authors hadn’t communicated with each other and were rather cross to learn that the other had just finished a book on the same subject. Secondly, that it was part of a dark plot to overwhelm opposing views, and to ensure decent review coverage – since journals prefer discussing pairs of books to singletons. Thirdly, that this is a really important subject – the fall of a very great power, that dominated the Mediterranean and most of Europe for over five hundred years – that hasn’t been examined in detail for some time, and which cried out for two books, each with a different slant. Peter’s book is an immaculately researched (and highly readable) blow-by-blow account of the events that brought the western empire down; while mine contains only a brief look at the causes of the fall of the West, and spends most of its pages investigating the consequences of this fall (hence my subtitle ‘And the End of Civilization’).

Heather: We both knew we were doing them, I think, but there was a huge amount of chance involved in when our research leaves fell, and hence when we were able to write them. And, as Bryan says, they are to our eyes very different and complimentary books (although it would be interesting to find out if readers thought so too). In broader terms, we are certainly both responding to huge wave of interest in the late Roman period, which has unfolded since the early to mid-1970s. I myself am certainly part of this wave, but, so far, it has tended to carry scholarship forward in lots of different areas at once (mine was barbarians) and hence the energy has generated the raw material for new overviews rather than the new overviews themselves. Bryan and I are both, I think, in part pulling these many different findings together in ways that make sense to us. I would myself expect other people to start wanting to generate new, broader takes on the subject as well.

Bryan Ward-Perkins lectures in Modern History and Fellow of Trinity College, Oxford. He has also written on The Last Statues of Antiquity, and From Classical Antiquity to the Middle Ages.

Peter Heather teaches at Worcester College, University of Oxford. A leading authority on the barbarians, he is the author of Goths and Romans, and Empires and Barbarians.