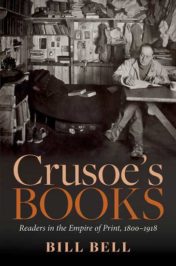 Across the centuries, in paintings and eventually in photography, one of the most common subjects for representation has been the reader.

More than simply remarkable artistic objects in themselves, such images can reveal a great deal about contemporary attitudes and beliefs about books and reading. It was common for Renaissance artists to surround Saint Jerome with the equipment of learning—bookshelves, manuscripts, reading desk—in order to convey the image of the great scholar in the sublime isolation of his study, at once a repository for the synthesis of texts and at the same time a place for the production of new kinds of knowledge. Many of these images—take the iconic portraits by Albrecht Dürer and Antonella da Messina—present Jerome as an idealised reader, poring timelessly over his books in blissful isolation from the temporal world beyond the walls of the study.

The same potent imagery finds confirmation in later iconography. In the great period of British emigration, involving the displacement of millions of nineteenth-century Crusoes, the same iconography would prove particularly resilient as attempts were made to contain the experience of living at a colonial distance. It is something to which a number of illustrated editions of Crusoe–leaning over his Bible with his precious shelf of hard-won trophies behind him–pay uncanny tribute.

The artist Thomas Selby Cousins emigrated to New Zealand in the 1860s and then on to Victoria, where he was soon making himself a reputation for scenes of Australian life. The Bushman’s Dream (pictured here) was reproduced in the Illustrated Sydney News in 1869. If we compare it to early illustrations for Robinson Crusoe, we get a sense of how this visual tradition was now becoming enmeshed in a colonial context. Such images describe the way in which reading conjures up in the imagination other events and places prompted by its encounter with the printed word. The dreaming bushman, sitting at his makeshift table in the outback, is carried back in his mind to an English scene. In the isolation of his hut, it says, the printed word can bridge the tyranny of distance through a vicarious return to a familiar world.

Despite its celebration of reading as a lonely act, we should not forget that The Bushman’s Dream appeared in a mass circulation newspaper, not unlike the one that appears in Cousins’ image. By this time, these tokens of global communication were part of a vast network involving steam trains, cargo ships, and the telegraph lines lately introduced to the Antipodes. Three-volume novels, such as the one that sits in front of him, were by then being produced on industrial presses and regularly arriving in their thousands at Australian ports by steam packet.

In the early twentieth century such images of the reader in exile were still finding purchase in even the most surprising of circumstances. In the fateful Antarctic spring of 1911, before Robert Falcon Scott and his sledging team set out on the journey from which they would not return, this same visual tradition was on Herbert Ponting’s mind as he posed the expeditionary leader for a remarkable portrait in his hut on Ross Island (above). Despite the apparently makeshift arrangement—books shelved in upturned packing crates, equipment hanging casually around, memento mori in the form of the pocket watch that the hangs beside the bed—what results is a tableau vivant, a pastiche of Jeromes.

Dora Thornton remarks on the way that such portraits, rehearsed from the sixteenth century on, were elaborately coded. The architectural setting, the choices of appurtenance, the very posture of the sitter, together convey messages about the status, education, and self-awareness of their subject. In this one moment, with his library ranged behind him, pen in hand, Scott takes his place in a lineage of individuals who had for generations taken refuge among their books. On the very edge of the known world, it seems to say, civilization continues, and the familiar practices of reading and writing make it possible.

Such images can be seen over the years as evidence of prevailing attitudes towards the history of reading. Even in an industrial age of print production the romantic appeal of the reader in solitary isolation is evident. The act of reading is both public and private at turns. Elizabeth Leane finds an analogy for Antarctic reading in the way that splinters of ice break away from an iceberg to form their own independent bodies:

text acted like ice in Heroic-Era expeditions, at times insulating expedition members from those around them, calving off little imaginative islands on which they could maroon themselves; and at other times solidifying the gaps between them.

In such instances, reading appeals to interiority, gesturing towards the privacy of cognitive experience; at others, it can be an explicitly social practice, mediating relations in ways that involve commonly held communal values.

Featured image: The Metropolitan Museum of Art, New York, Saint Jerome in His Study (1514) by Albrecht Dürer. Bequest of Ida Kammerer, in memory of her husband, Frederic Kammerer, M.D., 1933.

Bill Bell is Professor of Bibliography at Cardiff University and Senior Research Fellow at The University of Goettingen. He has held visiting posts at the Universities of Canberra, Munich, Ottawa, and St John's College Oxford. He was the founder of the Edinburgh Centre for the History of the Book and is General Editor of The Edinburgh History of the Book in Scotland (4 volumes). His publications also include the co-authored Exploration, Writing and Publishing with John Murray, 1773-1859 (Chicago, 2015) and he served as editor of the OUP quarterly journal, The Library, the world's premier scholarly journal in bibliography.