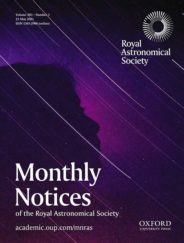 Monthly Notices of the Royal Astronomical Society is one of the world's leading primary research journals in astronomy and astrophysics, as well as one of the longest established. It publishes the results of original research in positional and dynamical astronomy, astrophysics, radio astronomy, cosmology, space research, and the design of astronomical instruments.

A long held misunderstanding of stellar brightness is being corrected, thanks to a new study published in the Monthly Notices of the Royal Astronomical Society based on International Astronomical Union (IAU) General Assembly Resolution B2.

“Stars have been observed for millennia and were crucial in navigating across deserts, seas, and oceans,” noted Zeki Eker, the study’s lead author. Stars are even more crucial today for guiding us to the secrets of universe. This is, however, assured only if their radiating power is measured correctly.

Brightness differences as small as hundredths—even thousandths—of magnitude is measurable today since the advent of Charge Coupled Devices, or CCDs, in space-born observations. There were only visual magnitudes until photography met telescopes at the end of the nineteenth century. Soon sensitivity difference in photographs was discovered; as soon as photo-plates like human eyes were invented, the two kinds of magnitudes, blue (photographic) and visual, started to be used. Today, there are many filters to see how a star shines at various colours, including those the eye cannot see. Filtered magnitudes are calibrated by a star called “Vega,” the zero point for all magnitudes. Measuring the magnitude of a star at various filters is needed for obtaining its surface temperature. Its absolute size or distance and angular size are also needed to obtain its absolute power: luminosity, energy radiated per second (Watt) from a star. But, these are only accessible in certain types of binary stars. Astronomers had to find a way to assign luminosity to each star, in the same way as light bulbs sold in markets would be useless if the power (Watt) is not written on them.

By the end of 1930s, a new kind of magnitude with an arbitrary zero point flourished. Unlike blue and visual, this new magnitude, named bolometric, represents the luminosity of a star, including all its colours—visible and not visible. This new magnitude is for calculating the luminosity of a star in one step, but it is not observable; no telescope could observe total radiation of a star including gamma-rays, X-rays, UV, visible, infrared, and radio at once. Bolometric magnitudes, therefore, were computed first from known luminosities of a very limited number of binary stars. Because luminosity is more than one of its parts, called visual luminosity, the idea that “bolometric magnitudes should be brighter than visual magnitudes” entered astrophysical textbooks and literature as the first paradigm and went unchallenged for 80 years.

The difference between bolometric and visual magnitudes is called bolometric correction (BC). BC is a useful concept: if it is added to a visual, the bolometric magnitudes can be obtained, and so there is no need to observe a star of various colours at once. Using the limited number of existing BC as a calibrating sample, many tables are published to give BC as a function of stellar effective temperature, a parameter available from multicolour photometry, simply from blue and visual magnitudes.

BC is like a missing part; when added to visual magnitude, the bolometric magnitude is obtained. The magnitude scale is in reverse order, like first class is more valuable (brighter) than the second, and second is brighter than the third, so on. That is, the smaller the number the brighter it is. Therefore, the BC values were recognized as negative numbers. Consequently, “the BC of a star must be negative” became the second paradigm.

Inconsistencies between paradigms become obvious if one pays attention to the third paradigm; the arbitrariness attributed to the zero point of BC scale. Studying BC tables published, one realizes that there are two groups: a group of BC tables with all negative numbers, and a group of BC tables with mostly negative but also containing a limited number of positive. Obviously, the first group of producers took the arbitrariness granted and felt free to change computed BC in such a way that no single positive BC was left in the table in order to avoid dilemmas; while the other group trusted their calculations by keeping them as calculated and did not care about the paradigms. It is obvious that both cannot be right: either one of them is wrong. Another inconstancy is that there are occurrences that the same star is found to have different bolometric magnitude and luminosity, which is not true, among the scientists who use different BC tables with different zero point.

Zeki Eker received a Ph.D. in astrophysics in 1985 from University of Wisconsin, Madison, USA. He has served as a Dr. assistant in 1986-89 in Aegean university, Izmir, Turkey, and as assistant, associate and full professor of astronomy in years 1989-2004 in King Saud University, Riyadh, Saudi Arabia, as physics professor in 2005-2009 in Onsekiz Mart University, Çanakkale and since 2009 professor of astrophysics in Akdeniz (Mediterranean)  University, Antalya in Turkey. He served as the director of TUBİTAK (Scientific and Technological Council of Turkey) National Observatory, Bakırlıtepe on the Taurus Mountains in the south west of Turkey from 2007 to 2012. He is currently working on basic relations in fundamental astrophysics and stellar dynamics of binaries and host stars with exoplanet.

Zeki is the lead author of “On the zero point constant of the bolometric correction scale” recently published in Monthly Notices of the Royal Astronomical Society.