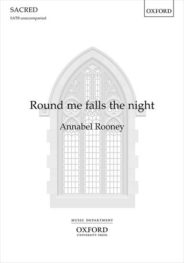 Round me falls the night

Like many aspects of choral composition, choosing the words is a combination of practical and creative considerations. If you want your music to be performed (and most composers do!), thinking about who might sing the words, and on what occasion, is as important as their inspirational qualities.

To date, most of my choral music is sacred, setting words that are chosen because they are suited for liturgical use. The Bible, works of religious poets, and collections of Christmas and Eastertide poems and carols have provided rich sources of lyrics. Looking at the choral output of other composers has led to some interesting poetic discoveries, for example Edward Elgar’s setting of Thomas Toke Lynch’s How calmly the evening, whilst the poet Alice Meynell was recommended by a friend working on Victorian literature. The gentle tone of her poem Unto us a son is given (“Given, not lent”) especially appealed.

It is hard to define what makes a text attractive, and, of course, this is probably different for every composer. But there are some texts which have received numerous musical settings, such as Drop, drop, slow tears by the seventeenth-century poet Phineas Fletcher. The expressive words of redemption fit well in the Lenten liturgy, and their character and imagery, in particular the dropping tears, invite musical illustration. The falling thirds at the opening of William Walton’s setting, for example, immediately evoke teardrops. Popular, too, is George Herbert’s The Call (“Come, my way, my truth, my life”). A versatile text which lends itself to a variety of occasions, the emotion is, strikingly, expressed almost entirely in monosyllables, imparting powerful simplicity and directness. Sometimes it may simply be the sound of the words that captivates, as in this excerpt from John Milton’s On the morning of Christ’s Nativity. The gentle alliteration is music itself:

“The winds with wonder whist,

Having found words that appeal, practically and creatively, my goal is to write music which illustrates and enhances the words, and is also musically coherent. There may be large-scale structural decisions, such as whether to replicate a strophic structure, or to reprise parts of the text, either in the interests of the musical form, or to give them particular stress. At a more localized level, the meaning and emotion of individual words might be depicted by melodic, harmonic, and rhythmic means. The interest is in deciding what the emphasis and interpretation shall be.

The well-known words of the Magnificat provide plenty of opportunities for such contemplation. Their nature (images of motion such as “scattered,” “put down,” and “exalted,” which often attract an appropriate musical illustration), and a knowledge of how other composers have responded to them, make the question ‘What is my response to the Magnificat?’ particularly pertinent. Shall I scatter the proud in a musical flourish? Are the rich to be “sent away” in musical emptiness, in descending lines and a thinning texture? Perhaps this could rather be a moment of exultation, focusing not on the literal meaning of the words but on the triumph of justice?

Looking for a text suitable for Evensong, I found William Romanis’ Round me falls the night by the simple strategy of perusing the “Evening” section of a hymn book. It was immediately appealing to me, and a musical idea came quite quickly. This is not always the case! The opportunity for intense quiet in a “whisper,” in “softly speaking,” and “Earthly sounds are none” contrasts with the potency of “Arms so strong to clasp and hold me.” Soft dynamics and low pitches contrast with fortissimo and the highest note of the piece. The light of the Saviour shines through the dark of the night, with a recurring juxtaposition of Db major and A major colouring the work. And it is the plea for the Saviour to keep watch through the night which becomes my focus. His presence is realized musically with repetitions of the phrase “I am near,” and it is with this that the work concludes.

Occasionally I have written my own words, finding that a musical and verbal idea come simultaneously. But generally, I prefer not to start with a blank canvas! Indeed, it is working with another creative form, with a seed from which the compositional idea may grow, which is one of the pleasures of writing choral music.

Annabel McLauchlan Rooney read music at Christ's College, Cambridge, holding a university instrumental award on the cello. She continued her studies in Cambridge with an MPhil and a PhD on eighteenth-century opera. Rooney started composing seriously in 2011, predominantly writing choral music, and now combines this with performance and instrumental teaching. Her music has been performed by renowned ensembles, including the Choirs of the Chapel Royal, and Exeter and Ely Cathedrals, and broadcast on Radio 3. In 2019, the Choir of Christ's College, Cambridge released an album of Rooney's sacred choral music, As a seed bursts forth.