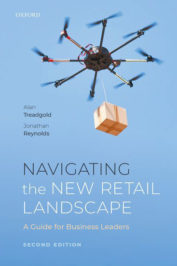 Before COVID-19 struck with such vengeance, the retail industry globally was already in a state of accelerated and highly disruptive change, enabled by the transformative impacts of technology in general and digital connectivity in particular. This was changing how shoppers around the world wanted to shop as well as the possibilities for retailers to engage with shoppers in previously unimaginable ways—most notably by the internet, of course.

The COVID-19 pandemic and the attendant lockdowns are changing the retail industry globally at a pace which could not have been imagined before the pandemic struck. Nowhere is this more evident than in the sharp acceleration in shoppers’ enthusiasm to do even more of their shopping online. One of the defining features of the pandemic in its early stages was the extreme difficulty that shoppers in many countries faced in booking scarce delivery slots to buy their groceries online in an environment where visiting physical stores was either not possible or not considered to be safe by many. At one point, the UK’s Ocado online food shopping business had a waiting list of 1 million potential customers. Many of the world’s leading grocery retailers responded at very impressive speed in adding far more capacity into their online shopping operations and, in the process, addressing shoppers’ concerns for safe and available supplies of basic items.

Across retailing as a whole, the flight to online as a preferred shopping channel has taken place at extraordinary speed. It took well over 10 years for online sales in the UK to grow to around 20% of total retail sales, and just a few months for them to increase by a further 50% to account for a third of all retail sales. Other countries have experienced similar transformations.

It seems highly unlikely that shoppers will revert to their pre-pandemic behaviours even, it must be hoped, after mass vaccination allows for a return to the personal freedoms that were previously taken for granted. While it is certainly possible to imagine shoppers wanting to return to some stores for some of their purchases, the concerns for personal safety as well as convenience that drove the accelerated migration to online shopping seem certain to be maintained. Neither is this confined to basic needs categories of retailing. In new car buying, 60% of German shoppers said that they would be more likely to buy a car online even after physical dealerships were allowed to reopen, for example.

The consequences for retail businesses are profound indeed. Around the world, some very large and long-established retail enterprises have collapsed into bankruptcy or else are trying to restructure within some form of bankruptcy protection. Fashion retailers and department stores are being especially severely impacted. Of course, many of these retail enterprises had, in the phrase du jour, “underlying health issues” before the pandemic struck. Health issues in the form of some combination of insupportably high levels of debt, inability to change at the pace that their customers were changing, and perhaps also a failure of leadership and imagination to see that the old, hierarchical, and inflexible business models were simply not fit for purpose in a world where customers and technology are transforming at such speed.

“amidst the turmoil and dislocation, there are substantial opportunities for reinvention”

The knock-on effects of the present disruption in the retail industry globally are significant and will be felt for a long time to come. Many frontline shop workers will lose their jobs as the stores that they used to work in are no longer needed. Property owners playing host to large estates of retail stores are being financially impacted as retailers exit their stores and cannot afford to pay the rents on the ones which are left, and some major property groups have collapsed already. The vibrancy as well as the commercial viability of traditional town centres will be challenged by the exit of large swathes of retail stores. When town and shopping centres lose their department store “anchor” tenants, the small independent retailers which add colour and vitality often fail also as overall attractiveness declines and foot traffic dwindles. And no longer are urban planners and property owners able to assume that other retailers will be queuing up to fill the space vacated by those which are closing stores.

But amidst the turmoil and dislocation, there are substantial opportunities for reinvention also. Individual stores will need to be far more interesting and engaging if shoppers are to be persuaded to return to them. Expect to see more, not less, effort being put into improving the physical environment of those retail stores which remain. More available space also means more opportunities to grow and flourish for new independent retailers which have always been the lifeblood of innovation in the retail industry. Retailers can and are creating new ways to engage with shoppers which meet their needs for safety as well as convenience through their online operations, sometimes integrated into their physical stores, sometimes not. Those tasked with creating urban environments that are attractive to people to visit and live in have opportunities also, provided they have the creativity to think expansively about what an urban centre could be rather than purely what it historically has been, as well as a planning environment that enables changes to be made in the use of space.

While it is invidious to produce league tables of the mayhem that the pandemic has wrought on different sectors of economic activity, there can be no doubt that the retail sector has been more structurally and more immediately impacted than many others. The challenges that the industry faces are profound indeed and the pain is already much in evidence. Yet there are persuasive reasons to be hopeful that we are in the early stages of seeing this most people-centric of sectors transforming in ways which are far better aligned to the new needs of shoppers and to the environments in which they find themselves.

Alan Treadgold is an independent consultant and adviser. He advises a wide range of retail and consumer products businesses globally on issues of shopper engagement, go-to-market strategy, and retail industry change. He has spent over 25 years in senior roles with some of the world's leading management consulting, marketing, and communication companies, including PricewaterhouseCoopers, Leo Burnett, and WPP. He has a number of Board advisory roles with enterprises globally and is a member of the Advisory Board of the Oxford Institute of Retail Management at the University of Oxford's Said Business School.

How working from home is changing our economy forever