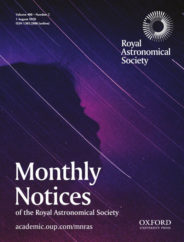 The unexpectedly rapid local expansion of the Universe could be due to us residing in a large void. However, a void wide and deep enough to explain this discrepancy—often called the “Hubble tension”—is not possible in standard cosmology, which is built on Einstein’s theory of gravity, General Relativity. Now, a team of astronomers have shown how such a void is possible in one of the leading alternative gravity theories called Modified Newtonian Dynamics (or MOND). Using it to develop a dynamical model of the void, they were able to simultaneously fit several key observables of the local Universe. They also showed that the same observables rule out standard cosmology at very high significance.

The new model (dubbed νHDM, with ν pronounced “nu”), is built on the controversial idea of MOND, developed in the early 1980s by Israeli physicist Mordehai Milgrom. Explains co-author Indranil Banik: “one of the biggest unanswered questions in astronomy is why galaxies spin as fast as they do. We can either continue using General Relativity and add dark matter, or we can use just their visible matter but MOND gravity.” In MOND, once the gravity from any object gets down to a certain very low threshold, it declines more gradually with increasing distance, following an inverse distance law instead of the usual inverse square law. MOND has successfully predicted many galaxy rotation curves, highlighting some remarkable correlations with their visible mass. This is unexpected if they mostly consist of invisible dark matter with quite different properties to visible mass. However, MOND has rarely been applied to cosmological scale problems.

The νHDM model used by the authors—originally proposed by Angus (2009)—is in many ways similar to standard cosmology. Neglecting structures, the overall expansion history of the universe is the same in both models, so both can explain the amounts of deuterium and helium produced in the first few minutes after the Big Bang. They should also yield similar fluctuations in the cosmic microwave background, which is essentially the flash of light from the Big Bang. This is largely because both models contain the same amount of dark matter, though instead of being rather heavy particles as in the standard approach, the new model assumes dark matter particles are light sterile neutrinos. Their low mass means they would not clump together in galaxies, consistent with the original idea of MOND to explain galaxies with only their visible mass. But on large scales, the dark matter would clump. With the extra gravity of MOND, structures would grow much faster, allowing much wider and deeper voids.

Importantly, there is quite strong evidence that we are indeed living within a large void stretching roughly two billion light years across. This evidence comes from many surveys covering the whole electromagnetic spectrum, from radio to X-rays. Gravity from matter outside the void would pull more than matter inside it, making it look like the Universe is expanding faster than it actually is. This could solve the Hubble tension, a possibility considered in several previous works. They concluded against the idea (Kenworthy et al. 2019), but the new study identifies several flaws with these previous analyses. At stake is the fact that any local void should cause the apparent expansion of the Universe to rapidly accelerate at very recent times. This is indeed observed—the so-called “cosmic acceleration parameter” is about twice the standard expectation, but in line with the new model once the void is included (Camarena & Marra 2020).

Unlike other attempts to solve the Hubble tension, the latest one is unique in using an already existing theory (MOND) developed for a different reason (galaxy rotation curves). The use of dark matter is still required to explain the properties of galaxy clusters, which otherwise do not sit well with MOND. Dark matter also provides an easy way to explain crucial observations like the cosmic microwave background and the expansion rate history. MOND is a theory of gravity, while dark matter is a hypothesis that more matter exists than meets the eye. The ideas could both be right.

A dark matter-MOND hybrid thus appears to be a very promising way to resolve the current crisis in cosmology. Still, more work is required to construct a fully-fledged MOND theory capable of addressing cosmology. The current study argues that such a theory would enhance structure formation to the required extent under a wide range of plausible theoretical assumptions. This needs to be shown explicitly (cue more algebra). Further observations would also help greatly. In particular, the density profile of the outskirts of the void we’re in could hold vital clues to how quickly it has grown, helping to pin down how the sought-after MOND theory must behave.

There is now a very real prospect of obtaining a single theory that works across all astronomical scales, from the tiniest dwarf galaxies up to the largest structures in the Universe and its overall expansion rate, and from a few seconds after the Big Bang until today. Says Pavel Kroupa, the PhD supervisor of Moritz Haslbauer and third author on the study: “Rather than argue whether this theory looks more like MOND or standard cosmology, what we should really do is combine the best elements of both, paying careful attention to all relevant observations.”

Featured image: Illustration of the Universe’s large scale structure. The darker regions are voids, and the bright dots represent galaxies. The arrows show how gravity from surrounding denser regions pulls outwards on galaxies in a void. If we were living in such a void, the Universe would appear to expand faster locally than it does on average. This could explain the Hubble tension. (Original by Zarija Lukic via Technology Review)

Indranil Banik is a Humboldt postdoctoral fellow in the Helmholtz Institute for Radiation and Nuclear Physics (HISKP) at the University of Bonn, Germany. His research focuses on testing whether gravity continues to follow the Newtonian inverse square law at the low accelerations typical of galactic outskirts.

The enduring mystery of how galaxies grow up