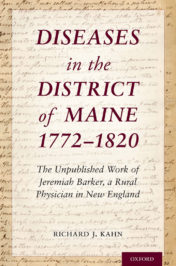 Diseases in the District of Maine 1772 - 1820: The Unpublished Work of Jeremiah Barker, a Rural Physician in New England

This is the story of a lost manuscript, an unpublished book written 200 years ago by a rural physician in New England—not one of the elites, but a preceptor-trained doctor who spent his long life taking care of people and writing about it. He is unique because of his fierce determination to keep up with the medical literature and communicate with both peers and patients. We don’t know why his book was never quite finished and published, but its discovery provides an important new primary source for medical history, research, and teaching, and will be of interest to an array of students and teachers, genealogists, physicians, and general readers.

Barker’s book was thought to have been “lost” by James Spalding, an early 20th Century medical historian in Maine, but in fact it was given to the Maine Historical Society by his descendants in the 1940s and called to my attention in 1990. The Jeremiah Barker Papers, held in the Maine Historical Society Library in Portland, consist of two manuscript boxes of letters, casebooks, texts with Barker’s marginalia, as well as his unpublished manuscript. It is a fifty-year record of his reflections on disease, diagnosis, treatment, and outcome, revealing his unusual effort to consult and cite the medical literature and other physicians in a changing medical landscape, just as practice and authority began the gradual shift from historical to scientific methods. I was excited to find it and delighted to get permission to work on it and publish it.

An excerpt from an 1806 letter illustrates Barker’s writing style as well as his concern about disease, diet, and alcohol abuse:

“I had opportunities of observing the habits, customs, and manner of living among the first settlers… In many towns I noted these things, always carrying pen, ink, and paper… The first white inhabitants of Maine… lived for a time, in a very similar manner as the Indians did. Their exercise was great, their food simple and wholesome, consisting chiefly of Indian Corn and salted pork, sometimes Bear. Rum could be procured only in small quantities; and happy would it have been for them and their posterity had this continued to be the case… Rum [today] is conveyed into the country towns, as it were, through aqueducts; but none is lost for want of throats.”

Barker’s practice covered many aspects of disease, from insanity to infection, consumption to chemistry, bleeding to childbed fever, and tradition to innovation. His patient narratives include this case of consumption:

“Soon after, a lady, in the bloom of life, rode ten miles in a chaise, covered with a muslin gown, in a damp evening air. The next morning, she awoke with hoarseness; and pulmonary consumption ensued, which terminated life in a few months. A physician, ironically, called this a muslin consumption.”

Here Barker is trying to make the case for preventive medicine with regard to women’s clothing, particularly in Northern New England. The French also thought that women’s clothing caused an increase in consumption, but they focused on fashionable styles and stays rather than whether women were warm and dry.

Barker experimented with the new chemistry of Lavoisier, going out on a limb to use alkaline therapies. He communicated with Boston’s George Parkman about treating the insane. He wrote to Hall Jackson about foxglove (“William Withering’s Wonderful Weed”) to treat dropsy, neither of them realizing that they were actually treating heart disease or why the treatment worked. Interestingly, he practiced at the same time as, and only 60 miles away from, the midwife Martha Ballard, who is familiar to us in Laurel Thatcher Ulrich’s A Midwife’s Tale. Unlike many physicians at the time, he did not disparage lay healers such as Ballard. However, he did express his disdain for certain other “sectarian” physicians that he considered bogus.

The Barker manuscript includes a subscription paper with the names of other physicians who promised in advance to buy a certain number of copies of the book when it was published. It tells us that the book would include biographical sketches of learned physicians, that it would inquire into the causes, nature, and prevalency of consumption, which Barker maintained was curable (in spite of having lost three wives to it), and that it was “written so as to be intelligible to those who are destitute of Medical Science.” It would be sold for two dollars in boards, which is about $43 today, a price comparable to that of other medical books at the time.

Why bother with medical history? The history of medicine provides us with a measure of humility, helps us avoid temporal superiority and dogmatism, and gives us an appropriate skepticism. It teaches us which methods have been useful in the past and which have led us astray, even those of the best minds of the period, promoting intellectual modesty and tolerance that serve us well.  Thus we may conclude that a better understanding of medical history can help offer healthcare providers and the public “perspective, [and] humility, where overconfidence frequently exists, as well as openness to change,” remembering George Santayana’s words: “Skepticism is the chastity of the intellect, and it is shameful to surrender it too soon or to the first comer.”

We must face uncertainty today, as did clinicians 200 years ago. Like them, we practice in a developing tradition and must deal with change and error as we care for our patients. Caring, curiosity, and love of learning are crucial to the makeup of a good clinician. It’s not just a job.

Richard Kahn is a retired internist and medical historian who lives in Tenants Harbor, Maine. He has written and presented many papers on aspects of medical history, and his work has been published in academic books and journals including Clio in the Clinic, American National Biography, The Persisting Osler—III, the Journal of the History of Medicine and Allied Sciences, and the New England Journal of Medicine. He recently published Diseases in the District of Maine 1772 - 1820.