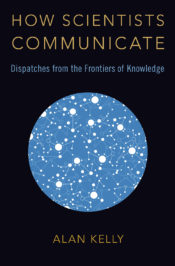 How Scientists Communicate: Dispatches from the Frontiers of Knowledge

One of the most fundamental processes within any scientific field is communication of results of research, without which research cannot have an impact. If any piece of research is worth doing, effort is expended in doing it, and the results are of interest, then the research is not truly complete until it has been recorded and passed on to those who need to know the findings.

Today, a scientist wishing to share their findings with the world has a wide range of options at their disposal. Even without thinking about scientific journals, they could decide to tweet their research, 240 characters at a time, and instantly share news with everyone on the planet, in theory. Papers published in journals are likewise available online for anyone to find, although access may be restricted depending on the terms of publication involved.

However, what separates scientific communication from any other form of communication is that it is a mediated process, where the quality of the research being communicated is policed, at least again in theory, by the process of peer review by independent experts.

Peer review is, in any respectable Journal, a tough and rigorous process; in high-quality journals, up to 95% of submitted manuscripts maybe rejected as not being good enough to be published. Reviewers are busy researchers working in the field, who should undertake this voluntary and unpaid work as part of their contribution to their fields as professional researchers; when they submit papers to journals themselves they expect them to be reviewed, and so it seems fair to contribute to the process of publication by doing the same in return.

This all takes time. For the top journals in the world, with full-time professional editors, papers may be accepted or rejected in the space of a week. For most journals, however, it may take a matter of weeks or even months for a report to come back to authors, which may be followed by a lengthy process of responding to the reviewers’ critiques and perhaps undertaking additional cycles or review and revision. It can take from 3-9 months in many cases for a paper to go from manuscript to publication (assuming it is not rejected), a pace which most scientists are used to and accept, as part of the cycle of research and publication.

What if we don’t have time to be leisurely though?

A situation where the world was literally waiting for the results of the research?

Then, in 2020, a virus, first identified in Wuhan, China in 2019, tore across the world with frightening speed and became the single most intensely studied scientific topic in history. As cases, and deaths, started to accumulate, large parts of the world went into lockdown, in part to buy time for the scientific community to work on understanding the disease, evaluate medical and clinical treatments, and work towards the ultimate goal of a vaccine.

Every question required careful yet urgent study, and key findings were quickly implemented in practice in the front lines of the war against COVID-19, with physicians poring over the latest advances to modify their practice in real-time. A genuinely unprecedented rate of publication occurred in an astonishingly short time, with over 23,500 papers being published up between 1 January and 30 June 2020.

How can the circuit from lab to practice best be expedited under these dreadful circumstances?

The main route of scientific communication absolutely has to be protected, with peer review ensuring that only reliable, safe, and useful findings are put forward, but of course many of those best qualified to review the papers are themselves incredibly busy in their own COVID-19-related research.

So, alternate routes, already increasingly present, came to great prominence. For example, preprint servers, where papers can be hosted before peer-review for rapid dissemination, became key resources. In some cases, politicians, the public or journalists picked up and publicised findings from such preprints without making the distinction that the work contained therein was not peer-reviewed and hence should be regarded as preliminary, or at least not validated by the standard quality control systems of science. Between January and May 2020, two databases—bioRxiv and medRxiv—hosted almost 3,000 papers on the topic, and such servers are now implementing far more stringent screening processes for submissions due to their widespread usage, albeit still short of full peer-review.

In addition, communication through social media, such as Twitter, can bypass the paper format entirely, and rumours, preliminary findings, and in some cases outright dangerous ideas flood onto the unpoliced expanses of these media, leading to situations which are particularly dangerous if they are picked up and amplified by others with great power to amplify news, such as politicians.

In parallel, the question of open access to research findings and data has come into even sharper focus, with a demand that the findings be brought, once validated, into the open without the barrier of publishers’ paywalls. As an example of open science and access to raw data, when the RNA sequence of the SARS-CoV-2 virus was first determined by scientists in China on 10 January, it was immediately made globally available through a public repository database, and was being used as a basis for vaccine development within days.

The pandemic has also placed new emphasis on the importance of multi-level science communication strategies, with scientists being challenged to be able to explain their latest findings variously and in rapid succession to experts, clinicians, politicians, journalists, patients, and the general public, and needing to be able to select the most appropriate language and approach in each case.

The vital importance of having a scientifically literate public has likewise never been clearer, to help people to interpret science-based findings and recommendations (and concepts such as risk) that change their lives but yet evolve on a regular basis, and to help them appreciate that scientists should and must change their advice when the evidence on which they base that advice changes as a result of ongoing research.

The negative side of science communication has also come to the front, with cases involving all the well-recognised and classified forms of communications misconduct, such as falsification, fabrication, and plagiarism. To take one example, a highly publicised study on the use of the agent hydroxychloroquine published in The Lancet involved a database which was found not to have existed, prompting a change in practice for that journal in terms of avoidance of such problems in the future.

Overall, the COVID-19 pandemic has seen the best of science and how it should work to respond quickly to an unprecedented challenge to the whole planet, focus the best qualified minds on the problem and a range of potential solutions, and communicate the outcomes to those who need to know them as carefully as possible, but it has also raised and amplified many challenges in scientific communication in the modern world.

So, a debate has been ignited about the ways in which science communication works, and how to trust scientific findings, which is likely to have long-lasting consequences.

In the meantime, we need to trust that science is our best route through these dark days, and that we will be protected by the continued operation of best practices in science communication.

We need to hope this will be the case.

Our lives depend on it.

Feature image used with permission from The White House on Flickr.

Alan Kelly is Professor of School of Food and Nutritional Sciences at University College Cork in Ireland. He is the author of Molecules, Microbes, and Meals: The Surprising Science of Food(OUP 2019) and How Scientists Communicate: Dispatches from the Frontiers of Knowledge (OUP 2020).

What history can tell us about infectious diseases