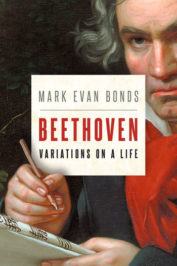 Beethoven: Variations on a Life

Films like Immortal Beloved and Copying Beethoven, whatever their value as entertainment, have helped create an image of the composer that often runs counter to the historical evidence. Here are five things that might surprise you about the composer.

He laughed a lot

Most images of Beethoven—especially those done after his death—show him scowling. But contemporary accounts make it clear that he was quick to laugh, and his letters reveal him as an incorrigible punster. Portraits of him from his own time typically show a contemplative gaze, exactly the kind of look one would expect from a creative artist. The scowl made its appearance only later. And as the public gradually became aware of his deafness, his thoughts of suicide, and his unhappy love affairs, the scowl became all the more intense.

He was frequently in love

The identity of the “Immortal Beloved,” the unknown woman to whom Beethoven addressed a passionate letter in 1812, remains a matter of controversy. But it was far from Beethoven’s only affair. As one of his students observed, the composer “was frequently in love, but usually only for a very short time.” A longing for marriage is in any case a theme that runs throughout Beethoven’s early correspondence.

He was greatly admired during his lifetime

Beethoven’s contemporaries found his music challenging, but works that listeners resisted at first, like the Eroica symphony, became crowd favorites within a few years. From around 1810 onward critics consistently hailed Beethoven as the greatest living composer of instrumental music. It was only the works of the composer’s final decade (1817-27) that truly baffled his contemporaries, but even here, the Ninth Symphony (1824) enjoyed immediate acclaim from many critics.

He was never stone deaf

Beethoven’s hearing began to decline while he was still in his twenties, and it deteriorated severely in the last ten years of his life. But the available evidence strongly suggests that he never lost his hearing completely. He worked tirelessly with doctors to find a cure, used ear trumpets, and even concocted some sort of resonator on top of his piano to deflect the sound not outward, at a right angle, but instead directly toward himself while seated at the keyboard.

He had to hustle to make a living

Unlike most other major composers of his time, Beethoven had no permanent appointment at a court or church, which meant that he had to cobble together an income from a variety of sources: teaching, performing, and above all selling his published music. But he was not a very good businessman and lamented the countless hours devoted to haggling with publishers. We can only imagine how much more he would have written had he had more time to do so.

Mark Evan Bonds is the Cary C. Boshamer Distinguished Professor of Music at the University of North Carolina, Chapel Hill, where he has taught since 1992. A former editor-in-chief of Beethoven Forum, he has written widely on the music of Haydn, Mozart, and Beethoven.