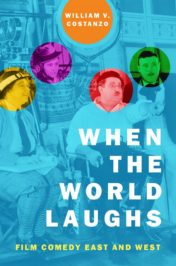 When the World Laughs: Film Comedy East and West

An astonishing array of Italy’s finest films are comedies. Some of the most memorable performances by actors like Marcello Mastroianni, Sophia Loren, Giancarlo Giannini, and Roberto Benigni have been in comic roles. The humor in these comedies harks back to the commedia dell’arte street performers of the Italian Renaissance and, before that, to the Roman plays of Plautus and Terrence. At the dawn of cinema, stock figures like the wily servant, the braggart soldier, or the pompous cuckold moved from the streets and theatres to the screen, where they continue to delight film audiences today. Italians still like to root for the trickster who outsmarts his social betters or the hapless underdog trying to get by. They are also endlessly amused by regional caricatures—with their local accents and peculiarly provincial traits—reminders that Italy is still a harlequin patchwork of niche cultures.

Six great comedies perpetuate this grand tradition, inviting us to laugh along with Italy at the human flaws and duplicitous behavior that bind us all together.

The English-language trailer announces “the crime of the century!” Then the soundtrack of ominous violins shifts to a mischievous medley of brass, and the exclamation point becomes a question mark. “The crime of the century?” Like the film itself, this preview turns the heist genre on its head. A motley crew of aspiring would-be thieves decides to rob a neighborhood pawn shop. They case the joint, assemble their tools, and plan a daring midnight raid across the roof and through the window, all under the supervision of a retired safecracker. The result is predictably, deliciously disastrous.

Mario Monicelli’s parody of heist films ushered in the era of commedia all’italiana. This “comedy Italian style” featured time-tested ingredients of commedia dell’arte—local types, regional accents, feats of startling ineptitude—brilliantly interpreted by talents like Mastroianni, Vittorio Gassmann, and Totò. But there was also something unpredictable in Monicelli’s Big Deal, a dark strain of cynicism that runs throughout the film and through many of the comedies that followed in its wake. Instead of a conventionally happy ending, the conclusion is more bittersweet, even catastrophic for many in the group.

We see this in the ambivalent humor of Pietro Germi’s celebrated satire on love and matrimony in southern Italy. The film’s premise is based on an article of the Sicilian penal code that was still in effect when Germi began directing. In a land where divorce was illegal, this relic of feudal law allowed anyone to kill an unfaithful spouse and receive a relatively light sentence. This gives Cefalù, a world-weary aristocrat played by Mastroianni, the solution to his problem: how to get rid of his wife so he can marry a pretty young cousin. Cefalù talks to his image in the mirror, admiring his elegant moustache but lamenting the bulge of his belly. That’s when his cloying spouse arrives with the afternoon tea, adding extra spoons of sugar. “Would you give me a little sip?” she asks, a little too sweetly, then abruptly turns into a screaming scold. Cefalù begins to daydream about her death. We see his fantasies enacted as mock murder scenes: she’s drowned in a pot of boiling soap, buried in quicksand, launched by rocket into orbit. So when the real murder takes place, we’re not sure how to take it, as comedy or tragedy. There’s no doubt, though, about Germi’s view of Sicilian justice. The outrageously high-blown rhetoric of Cefalù’s attorney in the final courtroom scene makes an operatic mockery of it all.

Marital mischief assumes a lighter form in Vittorio De Sica’s Marriage Italian Style. This time Mastroianni is a wealthy businessman who refuses to marry his long-time mistress, Filomena (played by Sophia Loren). Having given him the best years of her life, she tricks him into marriage by pretending to be fatally ill. He sneaks off from the deathbed to telephone his pretty young accountant, not noticing the figure of his new wife standing behind him and very much alive. Her miraculous recovery and the riotous scene that follows is one of the funniest in Italian comedy. While Mastroianni rants, threatening to get his gun, Loren grabs a plate of pasta from the fridge and calmly replies, “It’s in the dresser. Don’t make a mess. I just ironed your shirts.” Her Neapolitan accent adds a touch of class to her composure.

The battle of the sexes becomes a more pointed issue of class conflict in Lina Wertmüller’s Swept Away. Here the roles of power and privilege are reversed. Mariangela Melato plays the part of an idly rich woman who lords it over her social inferiors. On board her yacht, she snipes and harasses the hired help (Giancarlo Giannini as a “primitive” southerner). Melato whines about the Communists with her friends or tans herself half naked on the deck while Giannini watches through a half-open hatch in smoldering silence. But when a storm strands them on a deserted island, it’s payback time, time for the macho male to dominate. Like Wertmüller’s earlier satires (The Seduction of Mimi/Mimi metallugico ferito nell’onore, 1971; Love and Anarchy/Film d’amore e d’anarchia, 1972; All Screwed Up/Tutto a posto e niente in ordine, 1973), Swept Away brazenly courted controversy by exploring sexual politics as well as the limits of laughter.

Franco Brusati’s title contrasts the basics of life with the luxuries. By the 1970s, Italy’s post-war economic boom had collapsed into the “years of lead.” Unemployed Italians headed north looking for work and a better life. Nino Garofalo (Nino Manfredi) goes to Switzerland. As the opening credits roll, we see him seated against a tree in an idyllic Swiss park while the locals enjoy their picnic lunches and the music of a string orchestra. Nino unwraps a sandwich and takes a bite, crunching down on the hard crust. Immediately, the music stops. People glare. It’s a preview of the problems that await him, the odd man out in a land of blond-haired children and abundance. We’ve seen this kind of misfit in comedy before–Charlie Chaplin’s immigrant, for example—but Manfredi’s performance is distinctively Italian. What might be normal in Rome or Naples is treated here as unsocial, even criminal behavior. He’s arrested for peeing in public and booed in a sports bar when he roots for the Italian team, even though he’s dyed his hair bright yellow. And while many of his adventures are played for laughs, the dark streak of commedia all’italiana clouds moments like the scene when he encounters a family of compatriots living in a chicken coop. The feathers fly and we may laugh, but we also feel the sadness and the shame.

Italy’s greatest living comic, Roberto Benigni, understands this duality of comedy more than most. He can play the goofy, loveable clown or the sinister foil, often in the same movie. In Johnny Stecchino (1991) he is both the Mafia assassin and the assassin’s luckless lookalike who gets tangled in a case of mistaken identity. In The Monster, he’s mistaken for a perverted serial killer. Watch the trailer for The Monster, a montage of slapstick sight gags. When a lit cigarette falls into Benigni’s pants, he fumbles with his crotch to put it out. His manic performance is funny enough, but it’s even funnier when the police watch it on surveillance video and decide that he must be the pervert. Like many comic heroes, Benigni’s Loris has a bit of larceny in him. Watch the supermarket scene when he orchestrates a minor heist by slipping produce into all the shoppers’ pockets, bags, and baby carriages. For non-Italians who may not know this early work, The Monster offers insights into Benigni’s most famous film, Life is Beautiful (La vita è bella, 1997), when his funny little guy confronts the monstrosities of the Holocaust and tries to pretend that it’s all a game.

With so much emotional dissonance in Italian comedies, dark and light mixed together, it’s not surprising that the country’s greatest philosopher of humor is Luigi Pirandello. In his 1908 essay On Humor, he theorized that a “perception of the opposite” is the essence of the comic. He likened humor to a shadow following close behind the body of ordinary feeling. What gives Mastroianni, Manfredi, or Benigni their comic vision is an ability to see, and be, both the preposterous self and the shadow in the midst of everyday experience.

William V. Costanzo is a SUNY Distinguished Teaching Professor of English and Film who has taught writing, literature, and film courses since 1970. A graduate of Columbia University with a Certificate in Film from NYU, Dr. Costanzo has published six books ranging from writing and computers to world cinema and film genres, including World Cinema through Global Genres and When the World Laughs: Film Comedy East and West.

Six French comedies you should see