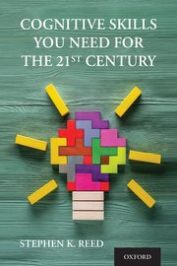 Cognitive Skills You Need for the 21st Century

A common goal for educators is to identify, and then teach, cognitive skills that are needed for the workplace. In 2017 a group of investigators at the Educational Testing Service in Princeton, New Jersey, investigated which skills are needed as a result of the rapid changes occurring as the United States shifted from an industrial to an information-based economy. The organization analyzed 142,000 online job advertisements that were posted between February and April of that year. The most highly requested skills were oral communication (28%), written communication (23%), collaboration (22%), and problem solving (19%). The Educational Testing Service decided to label them “21st-century skills.” These skills are a combination of cognitive (nonroutine problem solving, critical thinking, metacognition), interpersonal (social), and intrapersonal (emotional, self-regulation) talents.

The World Economic Forum’s Future of Jobs Report 2018 took a different approach by asking executives of some of the world’s largest employers to report on the latest employment, skills, and human investment trends across their industries. The survey revealed an accelerating demand for new specialist roles related to understanding and using the latest emerging technologies – AI and machine learning specialists, big data specialists, process automation experts, information security analysts, human-machine interaction designers, and robotics engineers. Skills such as creativity, originality, critical thinking, negotiation, and complex problem solving will, according to the report, become more valuable. The World Economic Forum predicted that there will also be more demand for leadership, emotional intelligence, and social influence skills.

These cognitive skills should be incorporated within courses taught at high schools, community colleges, and universities. An introduction to technological skills can begin in high school. In 2016, the College Board’s Advanced Placement Program oversaw the largest course launch in the program’s 60-year history with the release of AP Computer Science Principles. The course introduces students to the foundational concepts of the field and challenges them to explore how computing and technology can impact the world. In the 2018-19 school year more than 5,000 schools were offering the course. A second course, AP Computer Science A, focuses on computing skills related to programming in Java. The course teaches the foundational concepts of computer science to encourage broader participation. Its big ideas are creativity, abstraction, data and information, algorithms, programming, the internet, and global impact.

A challenge for community colleges and universities is to design instruction for the increasing number of students who enter higher education without a declared major. A 2019 article in The Chronicle of Higher Education discussed how some institutions are preventing these students from wandering among courses. One solution is to ask incoming students to select an academic focus area or meta-major to help them explore topics that should appeal to them. In the fall of 2019, the entire University System of Georgia asked incoming freshmen to declare an academic focus area if unable to select a major. The University of Houston has a similar program based on the same concept.  These programs have been influenced by studies that find college students have trouble succeeding because they are faced with an overwhelming number of options.

Community colleges are evaluating a related project. The Association of American Colleges and Universities announced that it had selected 20 colleges to participate in a two-year evaluation project. The goals of the project are to map students’ goals to pathways, help students choose and enter a program pathway, keep students on the path, and ensure that students are learning.

A guided approach can also be helpful for reducing changes in majors. Within three years of their initial enrollment approximately 30% of undergraduates in associate and bachelor’s degree programs change their major at least once. But Georgia State University reduced changes in a major by 30 percent since it began its meta-majors program seven years ago. Those students who did change majors were more likely to have crossover credits.

Although clustering courses around a meta-major may be helpful for students with undeclared majors, the courses do not necessarily teach skills that are important for the future workplace. These skills include oral communication, written communication, collaboration, and problem solving. They also include creativity, originality, critical thinking, negotiation, and complex problem solving. These cognitive skills should be incorporated within cluster courses to prepare freshmen for skills that are likely to be in demand when they graduate. The creation of generic courses for all majors should also focus on these skills because they are relevant to all college graduates. Such generic courses have the advantage that they do not require students to select a major or even a cluster area.

Stephen Reed is an emeritus professor at San Diego State University and a visiting scholar at the University of California, San Diego. He served for seven years as the coordinator of a joint doctoral program between the two universities in mathematics and science education. He is the author of five books and is now working on the 2nd edition of Thinking Visually and the 10th edition of Cognition: Theory and Applications.

How to rate and rank potential doctoral students