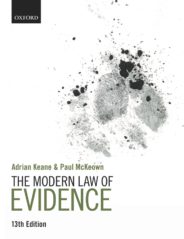 Imagine that you are a juror in a trial in which the chief witness for the prosecution gives evidence about the alleged crime which is completely at odds with the evidence given by the accused. One of them is either very badly mistaken or lying. On what basis will you decide which one of them is telling the truth? And how sure can you be in your conclusion?

Perhaps demeanour, way of speaking and body language are high on your list of relevant factors to look at to decide if someone is being honest. These are probably the weakest indicators as to whether a witness is credible. A witness who is confident and spontaneous may be thought to be worthy of belief. But the impression of confidence and spontaneity may come from an honest witness because she has prepared carefully for trial, using her earlier truthful statement. Or it may come from a lying witness, who has also prepared carefully by learning his false story by heart. Lying is a cognitive skill and so the more you practice, the better you get.

A witness who is nervous and hesitant may not be very convincing but may well be telling the truth; many witnesses, even if they have prepared carefully, find the giving of evidence in court an unnerving experience, especially if they are young or otherwise vulnerable. Demeanour and delivery are not a reliable way of assessing credibility. Perhaps you have other indicators of likely accuracy and veracity. Was the witness’ account consistent or inconsistent; and was it a full and detailed account or did it have gaps? However, all these factors can mislead.

People often think that consistency with what the witness has said previously or with what is agreed or clearly demonstrated by other evidence is a strong indicator of reliability. But it may stem from deliberate deceit, including collusion, as when two corrupt police officers fabricate a case against the accused. Equally, consistent evidence may be unreliable because it is the result of innocent and accidental contamination, as when two witnesses find themselves talking about the event that both have just witnessed. Later, they may well find it difficult to distinguish between what they observed for themselves and what they were told by each other. When a witness has made a previous inconsistent statement, this is thought to indicate a lack of credibility, but it is often normal or explicable and may even be brought about by the nature of the interview process or the vulnerability of the witness when under cross-examination. The risk is particularly high in the case of a child victim of an assault, who may be questioned over and again. At some stage, the child may well take the line of least resistance and agree to whatever is being suggested, just to bring the whole process to an end.

A witness whose account has gaps and lacks detail is often regarded as an unreliable witness, whereas a witness who gives a full and detailed account is often thought to be reliable. However, gaps and lack of detail are the norm for most ordinary people doing their best to tell the truth as they remember it. A high degree of specific detail in long-term memory is unusual. Memories of experienced events are always incomplete. This is especially true in the case of adult memory of childhood events and witnesses to traumatic events when the brain, quite healthily, blocks out some of what the person witnessed.

Adrian Keane is an emeritus professor of law at City, University of London.

Time to abandon “beyond reasonable doubt”