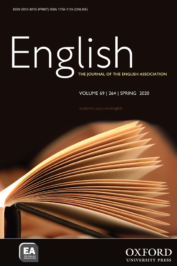 English: The Journal of the English Association

English is an internationally known journal of literary criticism, published on behalf of The English Association.

June 2020 marked the third anniversary of the Grenfell Tower disaster, when 72 people died as a result of a fire in a block of flats in one of the poorest parts of the richest parts of London. Before and since the fire, in recent years the United Kingdom’s most marginalised and vulnerable communities have endured other disasters, including austerity, the Windrush scandal, and, most recently, the ongoing COVID-19 pandemic. What do the fire and the pandemic have in common? Lots. We can understand how much when we understand how often people have described both using the language of tragedy (that is, a set of ideas and terms derived from the performance and study of tragic drama).

When I am teaching tragedy, my students often ask where a particular tragedy starts, or what causes it.  We have also discussed how people have used the language of tragedy to expose or conceal the causes of both Grenfell and COVID-19. Shortly after the fire, the Conservative local government minister, Alok Sharma, addressed Parliament to say “This is a tragedy which should never have happened.” From a certain perspective, this is a paradox: tragedy is always going to happen because of a character’s flaws, or fate, or the gods. Oedipus tries not to kill his father and sleep with his mother, but does so all the same, disclosing how tragedy can be seen as “that which is and must be,” as the literary scholar Northrop Frye put it. At that point, though, Sharma didn’t say why the fire was always going to happen. Others did, and have continued to do so.  During the 2019 UK general election, Jacob Rees-Mogg, the Conservative MP and then-leader of the Commons, had to apologise for a radio interview where he appeared to blame the dead: it was a “tragedy” that Grenfell victims hadn’t followed “common sense” and ignored advice from the Fire Service. Back in 2017, Sadiq Khan, London’s mayor, also used the language of tragedy.  But he had a different target, affirming what Sharma and Rees-Mogg did not, or would not: “The tragedy we’re seeing is because of the consequences of mistakes and neglect from politicians, from the council and from the Government.”

Are people saying similar things now about COVID-19?  Perhaps. One charity has acknowledged that during the pandemic suffering is experienced unequally and should not be: “There can be a strong spoken or unspoken feeling that certain deaths are more tragic than others. But every death can be a tragedy for friends and relatives left behind.”  Inequality – in income, housing, health, education, policing, ways of dying, whatever – is not something that has to exist. People cause it by making specific political, economic, and social choices. Are those with power prepared to make different choices, or will they continue to obscure the effects of the choices they have made?  Invoking tragedy might help them do so, if we are made to assume suffering is inevitable, or due to individuals’ failings.

But Grenfell showed that not everyone uses the language of tragedy this way.  In Spring 2020, then, as the pandemic tightened its grip, headlines appeared like “Tragedy unfolds as virus deaths rise in Europe’s homes for elderly.” These problems caused by how we look after old people for profit made a bad situation worse. Comparably, because of how they were housed, Grenfell’s victims were overwhelmingly poor, black or minority ethnic individuals and families. Now, in the UK, there is ample evidence that black and minority ethnic communities have suffered disproportionate levels of COVID-19-related morbidity and mortality. In this context, saying black lives matter has rarely mattered more.  Ethnicity intersects with class, too. People in low-pay, insecure, high-exposure jobs are more likely to contract and die from COVID-19.   This, in turn, is “a terrible tragedy,” as a union official described the deaths of five London bus workers.  We might add that during the crisis, many people have experienced food shortages, endured isolation, felt unsafe in their homes, suffered from increased stress or domestic abuse, seen employment stop suddenly, or received a subsistence income from the state. This has been described as becoming a new normal. But for many other people this has already long been normal, and this is tragic.

Tragedy involves suffering; it also requires heroes. During the COVID-19 crisis, it has become important to celebrate the efforts of some of the lowest-paid people in society, as heroes amongst us – medical staff, postal workers, bus and delivery drivers, refuse collectors, and carers. Aristocratic tragic heroes, and the stories they inhabit, might seem a world away from these everyday heroes, and from Grenfell.  But the point of such tragic heroes, however flawed, haughty, white, or male, is to propel stories that create “pity and fear” (in Aristotle’s terms).  Such emotions unsettle characters – and audiences – with sympathy. Our current heroes and victims of Grenfell or COVID-19 or any of the inequalities that made them possible or worse do not need or want pity or sympathy.   But they demand and deserve action.

In the words of the great theorist of modern tragedy, Raymond Williams, such action involves “struggle,” even “revolution.” Many people have protested that the world cannot go on as if it is business as usual after lockdown; tragedy can help us anticipate what could or should be different. For as Williams put it, “the action of tragedy” makes us “make…connections” between causes and effects, between myth and reality, between victims and perpetrators. Tragedy, then, can make us see the connections (and the calculated disconnections) that explain why the haves have and the have-nots don’t.

As a “starving mutinous” citizen says of his supposed betters early in William Shakespeare’s great social tragedy, Coriolanus: “what authority surfeits on would relieve us.” When we look at the “rabble” in that play, or the female asylum seekers in Aeschylus’ The Suppliants, or those still campaigning for justice for Grenfell, or Windrush, or George Floyd, we see, finally, how tragedy – as experience and as art – makes connections amongst and beyond those who have been told they have no power because their lives do not matter, precisely because they do.

Adam Hansen is a Senior Lecturer at Northumbria University and co-editor of English: The Journal of the English Association.

How germs (or the fear of them) spawned Modernism