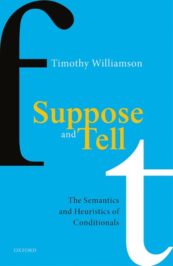 Suppose and Tell: The Semantics and Heuristics of Conditionals

What is hypothetical thinking? We do it continually. Consider making a decision, from choosing what to eat to choosing what to do about a dangerous disease. In deciding between options, you have to consider each of them, working out what’s likely to happen if  you take it, then compare the results. A natural human way to do that is by imagining taking the given option, and following through that scenario, still “offline” in imagination, but constrained by your background sense of reality. That sense includes innate or learned patterns of expectation about what will happen next, of how things and people in general tend to behave; it also includes your knowledge of your local environment and its particular inhabitants. It may be informed by modern science. Unfortunately, it may also be distorted by various sorts of prejudice and error. Still, we often have to rely on our ability to preview options hypothetically, because we cannot try them all before deciding. Choosing the right option first time can be a matter of life or death.

Hypothetical thinking is used for theoretical purposes as well as practical ones. For example, when a mathematician wants to prove that every number with a property P also has a property Q, the most straightforward way to do it is by supposing that an unspecified number x has P, then proving from that hypothesis that x also has Q. For that shows that if x has P, then x has Q. Since x could be any number with P, the argument establishes that every number with P also has Q.

What we fail to realize, in unreflectively applying the Suppositional Rule, is that it contains a hidden logical inconsistency. That can be proved in several different ways; Suppose and Tell has the details. Thus it cannot be 100% reliable. But that does not mean that it is completely useless. It works well enough for practical purposes in most ordinary applications. When restricted to acceptance on the basis of mathematical proof, it works perfectly. But the unrestricted rule, which we use in everyday life, subtly generates contradictions in some cases.

The Suppositional Rule is what psychologists call a heuristic, a way of answering questions of some kind which is quick and easy to use, but only imperfectly reliable. For example, when we are asked which personal names in a list are the most common, with no access to statistics, we may use their psychological accessibility as a heuristic, a guide to their frequency. In vision, we may use discontinuities in colour as a guide to the edges of solid objects; camouflage exploits the limitations of that heuristic.

The inconsistency of our heuristic for conditionals helps explain why logicians have had so much trouble understanding the meaning of conditional statements in natural languages. It was already a matter of controversy amongst the ancient Greeks, more than two thousand years ago. The poet Callimachus wrote: “Even the crows on the rooftops are cawing about the question ‘Which conditionals are true?’” It is just as hotly contested today amongst philosophers and linguists. The trouble was that we didn’t realize just what rule we were applying, so its inconsistency was unclear. This affected even the data on which discussion relied, which largely consisted of sample sentences classified as “correct” or “incorrect”—using the inconsistent heuristic!

How can such a logically flawed heuristic serve us so well in practice? As with other paradoxes uncovered by philosophers, in practice we can get a long way by backing off whenever we bump into a paradox, without trying to understand what it is we have stumbled across.

Timothy Williamson is Wykeham Professor of Logic at the University of Oxford and Whitney Griswold Visiting Professor at Yale University. He has also taught at MIT, Princeton, Edinburgh, Trinity College Dublin, Chinese University of Hong Kong, and elsewhere. He works on logic, philosophy of language, epistemology, metaphysics, and metaphilosophy. His books include Debating the A Priori (with Paul Boghossian), Suppose and Tell, Doing Philosophy, Tetralogue, and Modal Logic as Metaphysics. He is a Fellow of the British Academy, Foreign Honorary Member of the American Academy of Arts and Sciences, and Member of the Academia Europaea.

How and why to study folk epistemology