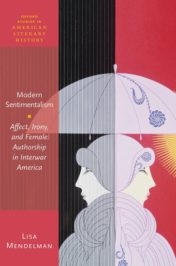 The recent interest in the epidemics of the last century coincides with growing media attention to the emotional ramifications of living with mass death and disease. COVID-19 has wrought an extended encounter with acute powerlessness and human frailty—a confrontation with mortality that is perhaps especially unmooring for those of us who live privileged lives. We have reached to early twentieth-century literature for insights on coping with this existential trauma—to works by Albert Camus, Virginia Woolf, Thomas Mann. But writing that does not dwell on illness also has something to teach us.

For literary critic I. A. Richards and novelists Willa Cather, Jessie Fauset, and Edith Wharton, the difficulty of abiding with the ailing body is the point. These authors express a self-conscious skepticism about what we learn from being sick and highlight how readily we embrace the advantages of wellness, even when we judge ourselves harshly for doing so.

These renderings of mixed feelings exemplify modern sentimentalism, a critical, often ironic, relation to one’s own enduring sentimentality. Typically associated with nineteenth-century white women writers, sentimentalism emphasizes feeling as a primary source of knowledge, meaning, and interpersonal connection. Twentieth-century female novelists like Cather, Fauset, and Wharton reinvent sentimentalism in keeping with evolving models of femininity. Together, these writers’ snapshots of illness capture the ambivalence inspired by physical vulnerability and offer some lessons in how psychic strategies for confronting disease at once protect and restrict our senses of self.

The first lesson is that illness is the rule that proves our vulnerability, though we might wish it was the exception. It’s hard to imagine Richards sobbing over a novel in his sickbed, but that’s his prime example of emotional susceptibility in Practical Criticism. “I reluctantly recall that the last time I had influenza a very stupid novel filled my eyes with tears again and again until I could not see the pages. Influenza is thought by many to be a disorder of the autonomic nervous system, and if this be so, there would be nothing surprising in this effect.” This anecdote is a rare personal disclosure in a volume that aspires to rigorous empiricism. Even at the level of the sentence, Richards shifts from impassioned subjectivity (“very stupid novel”) to impersonal clinicism (“disorder of the autonomic nervous system”). Richards’s “reluctance” to claim the “sentimental . . . effects of illness” engenders a doubly-distanced interpretation: The tears are a symptom of biological infirmity, not of psychological weakness. As if the first meaning was somehow more reassuring than the second!

The second lesson is that illness can be instructive, even in its self-alienation and disorientation. Cather’s The Song of the Lark opens with the young, white female protagonist in the throes of pneumonia. “Thea had been moaning with every breath since the doctor came back, but she did not know it. She did not realize that she was suffering pain. When she was conscious at all, she seemed to be separated from her body; to be perched on top of the piano, or on the hanging lamp, watching the doctor sew her up. It was perplexing and unsatisfactory, like dreaming. She wished she could waken up and see what was going on.” Cather here rejects sentimental tropes of illness as enabling sympathetic identification (e.g., Little Eva in Uncle Tom’s Cabin). Instead, she underscores how difficult it is to identify with one’s own experience of illness. Yet Thea’s enigmatic distance from everyone, including herself, persists long after her feverish dissociation abates—and has valuable consequences. Her capacity for detached self-witness fuels her creative development and enables her success as an international opera star.

The third modern sentimental lesson is that it’s hard to stay alive to others’ pain. En route to Chicago to launch her music career, Thea crosses paths with a sick young woman “a little older than her,” travelling West “for her lungs.” Thea sits down near the young woman to avoid “hurting her feelings,” but the artist’s thoughts quickly return to her own circumstances. Feeling “the full, powerful pulsation” in her chest, she “smiled—though she was ashamed of it—with the natural contempt of strength for weakness.” Thea doesn’t look great, but she’s human. Cather’s point, I think, is that we have a tendency to deny our own mortality. This defense mechanism allows us to keep moving through the world, even as it can undermine intimate connection.

The forth lesson is that psychological suffering can be more isolating than physical illness. These painful realities uniquely affect people from marginalized communities. In Jessie Fauset’s Plum Bun: A Novel Without A Moral, the black-passing-as-white protagonist contrasts her childhood experience of getting the mumps to the psychic anguish wrought by American racism. Angela’s memory of the “inglorious disease” involves profound care and community, despite the financial impossibility of hiring a doctor. “She was the object of anxious solicitude for the whole house.” But now, looked after by a white neighbor, Angela fears that care would not extend across the color-line. The “agony” and “anguish” of a black woman, the “sickness of the soul” caused by US racism, is not “understood” or “shared” outside of her community. She envies “people possessed of a blind religious faith” and contemplates suicide. Eventually, however, she decides to get on with life, “not because she felt like it,” but because she recognizes that staying in bed won’t help matters.

The fifth lesson is that we shouldn’t be afraid of pain. In Edith Wharton’s The Gods Arrive, a grandmotherly character imparts deathbed wisdom: “Maybe we haven’t made enough of pain—been too afraid of it. Don’t be afraid of it.” This line encapsulates Wharton’s career-long interest in modernity’s problematic attempts to obviate human suffering. From drugs and dancing to science and self-care, Wharton suggests that cultural innovations are often driven by the short-sighted desire to find a panacea for the human condition. To the extent that more promising, sustainable results exist in Wharton’s novels, these alternatives arise from more realistic efforts, underwritten by worldly acceptance.

The final lesson is that melancholic uncertainty can reflect psychic wisdom, even psychic health. In Wharton’s Twilight Sleep, Nona Wyant is at once the novel’s most grounded, most thoughtful, most melancholic, and most consciously uncertain person. Her mother flies from rest cure to spiritual healer. Her sister-in-law undergoes the novel’s titular childbirth anesthetic so “that nothing should ‘hurt’ her.” Her father descends into alcoholism. And so forth. Nona, meanwhile, finds “the business of living … a tortured tangle.” When she ends up shot in the arm, as the first responder to a family crisis, the young insomniac finds her father’s physical proximity her only fleeting “comfort, … as if the living warmth he imparted were something they shared indissolubly.”

We might wish for more comprehensive solutions, particularly in our contexts of physical distancing and social isolation. As early twentieth-century writers remind us, the struggles of a century ago are also our own.

Featured image from the cover of Modern Sentimentalism by Lisa Mendelman.

Lisa Mendelman is assistant professor of English and Digital Humanities at Menlo College. She researches and teaches at the intersections of science and affect in American literature since 1865. Her writing has appeared or in American Literary History, Modernism/modernity, Arizona Quarterly, and Modern Fiction Studies.

What American literature can teach us about human rights