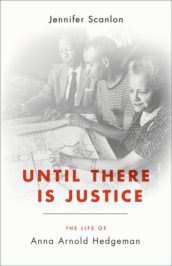 Until There Is Justice: The Life of Anna Arnold Hedgeman

As we reflect on the murder of George Floyd in Minneapolis, and on the continuation of white supremacy’s enactment through police violence, we might also reflect on the region’s histories of integration and segregation, community building and racism, which in the Twin Cities as elsewhere have long gone hand in hand. Take, for example, the case of civil rights activist Anna Arnold Hedgeman, a descendant of the black southern migrants who first claimed Twin Cities citizenship during the Civil War. These pioneers, who called themselves pilgrims, founded Pilgrim Baptist Church in St. Paul and continued their community building by founding a black newspaper, the Western Appeal, securing employment in the fire, police, and postal departments, and forming enough of a presence to draw Frederick Douglass and Booker T. Washington to town for lectures. The black elite settled on “Oatmeal Hill,” a bluff overlooking downtown St. Paul, where they were part of a patchwork of African American communities comprising a rich array of people, including barbers, lawyers, clerks, railway porters, domestic workers, carpenters, tailors, and government workers.

Growing up about twenty miles outside of Minneapolis, in the otherwise almost exclusively white town of Anoka, Anna Arnold was secure in her sense of self and family. When she claimed one of her many “firsts” or “onlys” as the first black graduate of Hamline University in St. Paul, in 1922, Arnold was not, as far as she and her family were concerned, doing anything they hadn’t expected of her. So secure were her sense of belonging, and the subtleties of midwestern racism, that many of the racial injustices she experienced as a child and then as a college student took some time to register. She knew that a neighbor child’s use of a racial slur was wrong, but its blatancy made it seem an aberration. Other slights, such as the ways in which the community celebrated its multiethnic histories and traditions, were more pedestrian in their violence. “We were Norwegian, Swedish, Irish, and German,” Hedgeman noted years later, while Africa “was a jungle to which we sent our missionary money by way of tiny missionary boxes.”

During her four years of college, Anna Arnold resided with family friends in St. Paul, understanding it then as a family choice but later recognizing that she had, most likely, been unwelcome in campus housing. When she was a college senior, Arnold’s assignment to a teacher training position in the university rather than out in the community seemed an apt recognition of her academic excellence. It was some time before she realized that she secured the assignment only because St. Paul would not permit her to teach in its public schools. Similarly, Arnold’s mentor’s encouragement to take a teaching position in the South following graduation resulted not from passion but from resignation, as his efforts on her behalf in Minnesota were not taking root. “I’ve since put together all sorts of things that happened to me during that time,” Anna Arnold Hedgeman would later recall with a mixture of anger and sadness, remembering that the white people she had grown up among, regardless of the love she had felt for and from many of them, ultimately had a limited capacity to honor her life and her blackness.

Anna Arnold took a teaching position at Rust College in Holly Springs, Mississippi, a state that was home to some of the nation’s most egregious manifestations of Jim Crow. Her residence in Holly Springs, marked by a series of indignities and a growing understanding of the institutional nature of racism, also served to postpone her recognition of the realities up North. After two years, Arnold determined to head north again, to enlist people, black and white, to save the South from itself. Her realization of racism’s reach grew, however, when she lived in Minnesota, Ohio, New Jersey, New York, and Washington, D.C., and came to understand the geographic boundlessness of racism. “I did not know yet,” she later recalled, “that the basic difference between the North and the South is the difference between an ax and a stiletto.”

Anna Arnold Hedgeman would go on in her long life to achieve many “firsts” and “onlys,” as New York City’s first consultant on racial issues, the first black American and first woman to serve in a mayoral cabinet in New York City, the first black woman to run for Congress in the Bronx, the only woman to serve on the organizing committee for the 1963 March on Washington, and the keynote speaker at the first joint African African American women’s conference, in Ghana. She devoted her life to promoting justice, which she viewed as a collaborative effort among people of all backgrounds, but she demanded of white people a basic recognition we still have to make: that the eradication of racism has a primary prerequisite, our owning up.

More than half a century ago, in words that resonate as clearly now as they did then, Hedgeman described the chaos that an unrestrained racism had wreaked on the nation, north and south: “There is chaos in the land; utter confusion and fear,” she wrote. “Where people thought there had been order there was no order; only day by day reports of our world falling apart.” No justice, no peace.

“I have decided that I want to live to be 120,” Anna Arnold Hedgeman once declared, “to see whether we can in this country produce some people who have sense enough to know that they have the world in their hands.” Were she alive today, Hedgeman would, in fact, be 120 years old. Let’s honor her in the only way that makes sense: by being those people of sense and sensibility, bringing forth justice and peace.

Jennifer Scanlon is William R. Kenan, Jr. Professor of Gender, Sexuality, and Women's Studies at Bowdoin College. She is the author of Bad Girls Go Everywhere: The Life of Helen Gurley Brown.