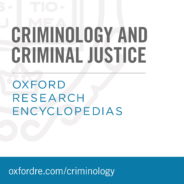 Substantive, peer-reviewed, and regularly updated, the Oxford Research Encyclopedia of Criminology & Criminal Justice combines the speed and flexibility of digital with the rigorous standards of academic publishing.

Recent events have spotlighted the pervasive and historic problem of racial disparities in criminal justice treatment in the United States. Videos of people seeking to use the police for racial control as well as videos of black people being killed by police have sparked outrage across the nation, and the world. Much of the attention, understandably, has been on police reform. However, if America’s knee, literally and figuratively, is on the neck of black people, its prisons and jails have played no small role in this situation. African Americans have much higher rates of incarceration than non-Latinx whites. The many collateral consequences of mass incarceration have thus fallen much more heavily on the necks of African Americans than on those of whites.

African Americans account for about 14% of the national population, but more than twice that, 33%, of all state and federal prisoners. African Americans are nearly six times more likely than whites to be in prison at any one time. A total of 1 in 3 black men born in 2001 is predicted to spend time in prison.

An objective assessment of the research evidence yields a rather ambiguous conclusion: Both theses have support. To some extent, African Americans’ higher incarceration rates do reflect their higher crime rates, and to some extent they also reflect racial bias in the criminal justice system.

If black people do have higher street crime rates, it’s not because of any biological deficiencies, a racist explanation popular a century ago. Rather, it’s because they are so much more likely than whites to live in poverty and near poverty; to live in low-income urban neighborhoods whose social and physical features contribute to crime rates; and to be victims of racial discrimination and microaggressions. Criminologists have written that if white people somehow lived in these exact same circumstances, their crime rates would be as high as black people’s crime rates.

But criminal justice bias also puts many African Americans behind bars. Racial profiling does occur. African Americans are more likely than whites to be arrested for a given crime and furthermore, to be prosecuted on more serious charges and sentenced to incarceration after conviction. This is especially true regarding the legal war on drugs. Although illegal drug use by African Americans is no higher than that of whites, they are arrested and go to prison at far higher rates for such use. Even skin tone matters; African Americans with darker skin tones are more likely than those with lighter skin tones to be sentenced to prison, to be sentenced for longer terms, and to receive the death penalty in capital cases. Some researchers have sought to examine the sources of racial disparities in imprisonment rates, finding that from 20% to 56% of disparities in incarceration cannot be explained by disparities in arrest rates.

Importantly, if African-Americans are more likely to be sent to prison, there will be disparities in terms of who is returning to society after serving their sentences. We know that those leaving prison have a number of hurdles toward reintegration, including difficulties getting certain jobs, voting, housing, and re-establishing familial relations. All of this leads to a greater likelihood of engaging in crime and encountering the criminal justice system again.

So what to do? Many observers have offered recommendations on how to reduce racial disparities in the criminal justice system, and in corrections specifically. Advocates involved with the Sentencing Project argued that such strategies as ending legacy policies from the war on drugs, removing mandatory minimums, and offering implicit bias training to criminal justice system actors can help. Since there is racial disparity in incarceration rates, any reduction in imprisonment overall will alleviate these disparities; recent data suggests that the lowering of incarceration rates have reduced racial disparities in just this way. We agree with these points. Increasing the focus on reintegration, particularly the obstacles facing people released from prison, will also help break the cycle. While some work has suggested that “ban the box” policies, which prohibit employers from asking about criminal history until late in the job application process,  may backfire due to implicit bias, other strategies to ensure employment of recently released individuals are likely to positively affect lives.

Racial bias is implicated in every stage of the criminal justice system. We are heartened by the recent worldwide protests against police killings and other abuse of African Americans, and we fervently hope that these protests will end this abuse. But if America does not also address the bias that exists in other stages of criminal justice, its knee will continue to lie on the necks of African Americans.

Steven E. Barkan is a professor of sociology at the University of Maine. He is the author of the Oxford University Press text, Race, Crime, and Justice: The Continuing American Dilemma, Crime Prevention: Programs, Policies, and Practices (with Michael Rocque), and several other textbooks and research articles in the areas of criminology and sociology. Much of his work focuses on the role played by white Americans’ racial prejudice in their preferences for the death penalty and other punitive treatment of offenders.

Michael Rocque is an associate professor of sociology at Bates College in Lewiston, Maine. His research interests include life-course criminology, race, and corrections. He is the author of four books, including Desistance from crime: New Advances in Theory and Research (Palgrave-Macmillan, 2017), and, along with Steven E. Barkan, Crime Prevention: Programs, Policies, and Practices (Sage, 2020).

How education could reduce corruption