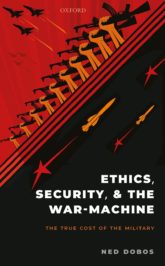 Ethics, Security, and The War-Machine

Pacifism, in its most recognisable form, is an absolute, principled condemnation of war. Military abolitionism is the view that institutions devoted to war are not justified in existing. Most pacifists are also military abolitionists. This is unsurprising. After all, if you think that going to war is always wrong, then you’ll likely think that having armed forces at the ready does nothing but enable us—and perhaps even temp us—to do things that we ought never to do. One can, however, be a military abolitionist without being a pacifist. There is no incoherence in conceding that it is sometimes morally justifiable to use military force, while at the same time opposing the creation and maintenance of establishments that exist for the purpose of doing that.

Consider an analogy. Most of us would agree that shooting someone in self-defence can be morally permissible under certain circumstance. Imagine a home invader is culpably threatening your life, there is nowhere to hide, no time to call the police, and so on. But this does not logically commit us to accepting that the private ownership of firearms for self-defence is legitimate. Many of us are adamant that it is not, presumably for some combination of the following reasons.

First, having a gun in the home does not make an unequivocally positive contribution to the safety of the people in it. There is a trade-off involved. A gun kept for protection against murderous intruders can (and all too often will) be used by one family member against another, or for self-harm. Second, using a gun in self-defence risks stray bullets and harm to innocent bystanders, especially in built-up urban areas. Third, if one keeps a gun in the home, one may be prone to use it more often than is justified, and not only in those rare cases where it is a necessary and proportional means of defending oneself and one’s family. Give a boy a hammer, and he will find that everything he encounters needs pounding.

If these considerations are enough to make private gun-ownership morally suspect, then by parity of reasoning the same goes for states and their war-machines.

First, militaries do not make an unequivocally positive contribution to the security of their parent societies; there is, again, a trade-off involved. It is not uncommon for armed forces to turn against the states that they are supposed to protect. Since 1950 there have been 232 military coups in ninety-four countries, and this is only counting the successful ones where an incumbent government was unseated. Moreover, if our adversaries happen to be paranoid types, protective of what they have rather that greedy for more, our military might inadvertently provoke what it is meant to deter. An insecure foreign regime might attack us not despite our armed forces, but because of the threat they pose. Militaries discourage opportunistic aggression, yes, but they simultaneously invite fear-based defensive aggression.

Second, the use of military force for national defence (or any other reason) almost invariably produces collateral damage. Particularly if we are talking about urban wars where soldiers and civilians and intermingled in the theatre of combat, harm to innocent bystanders is to be expected. Neta Crawford, a director of the Costs of War Project at Brown University, tells us that “the US military increasingly emphasized civilian protection during the wars in Afghanistan and Iraq at rhetorical, doctrinal, and operational levels. Minimizing collateral damage went from being one concern among several, to an imperative that was institutionalised to a degree that it had never been before.” And yet, civilians continue to be killed by the United States and its allies. As things stand, the prospect of war without collateral damage is wishful thinking.

Third, militaries—like guns—are liable to be overused, not just by warmongering regimes, but also by otherwise decent, democratic governments that are sincerely committed to never waging unjust wars. It is the law of the instrument writ large: insofar as we invest considerable resources into our military establishments, we are bound to seek out opportunities to use them, and some of these uses will turn out to be misuses, or abuses.

The upshot is this: the reasons we usually give for why people ought not to carry firearms—despite the fact that they would occasionally be justified in using them if they had them—are equally reasons why states should not keep militaries, despite some wars being just. There are, of course, important differences between these two contexts, which may or may not undercut the analogy. But the point is just that we have here an argument against the existence of military establishments that does not presuppose or rely on any kind of absolute, principled opposition to war. And it is not the only such argument available. One can be an abolitionist, without being a pacifist. One can be anti-military, without being anti-war. It is a mistake to suppose that these two positions stand or fall together philosophically.

Featured image from cover of Ethics, Security, and The War-Machine by Ned Dobos.

Ned Dobos is Senior Lecturer in International and Political Studies at The University of New South Wales at the Australian Defence Force Academy. He is the author of Insurrection and Intervention: The Two Faces of Sovereignty (Cambridge 2012) and co-editor of Challenges for Humanitarian Intervention: Ethical Demand and Political Reality (Oxford 2018).

How to address the enigmas of everyday life