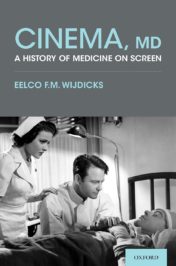 Cinema, MD: A History of Medicine On Screen

I read there is a spike in streaming of the 2011 film Contagion by Steven Soderbergh. The film uses a made-up virus loosely modeled after a Nipah virus outbreak. Contagion opens with a black screen, and we hear a woman coughing. The fictional virus MEV-1 hits the brain (and not the lungs as in corona virus pandemics), and we see deadly seizures and exposed brains with surprised pathologists. In Contagion the virus spreads quickly across the globe and kills its victims via a simple chain of germs—from a credit card to a bartender’s hand, to the cash register, to the glass on the bar.  It is a great depiction of fomite transmission (i.e., the proven concept that some infectious agents remain detectable on plastic and stainless steel surfaces for days).  Contagion has another clear message:  it appropriately asks viewers to question how our leaders and public health organizations respond to such situations but also how quickly industries can manufacture a vaccine.

Contagion portrays a world with public overreaction and slow, clueless governmental response, although the World Health Organization and Centers for Disease Control are presented as trustworthy and uniquely clear headed (sounds familiar?). The carnage is tremendous, and the Red Cross runs out of body bags ―another nod to the current pandemic,  in which freezer trucks filled with cadavers in New York City were needed when morgues reached capacity. Contagion does not address the now well-known concern of intensivists that hospitals may suddenly become overwhelmed with patients with severe viral (and bacterial) pneumonia in need of ventilators, but this movie virus is neurotropic. But there is even more. A quote from this film rings true to this day: “somewhere the wrong bat met up with the wrong pig.” (The species-jumping virus in Contagion that ultimately infected humans is a mix of bat and pig virus.) A vaccine is found very quickly but in a strange way. A CDC research scientist speeds up the process by inoculating herself with the vaccine, and it becomes available for general use in just a few months.  Contagion is a great movie, not because it now looks so plausible, but because the filmmaker’s asked epidemiologists Larry Brilliant and Ian Lipkin to participate in writing of the screenplay.

A number of important films have addressed medical epidemics over time. Jezebel, which is about yellow fever, shows a long parade of patient-laden horse carts driven by nuns through New Orleans and afflicted homes marked with a big Y. The film 1918 combines the devastation of returning from war with the influenza epidemic and creates a realistic depiction of how communities were affected. Although the cause was never found, Encephalitis lethargica was also pandemic through 1918, both in Europe and the United States and resulted in Awakenings, based on the book by Oliver Sacks.

In an article in the April 13, 2020, issue of The New Yorker, “Experiencing the Coronavirus Pandemic as a Kind of Zombie Apocalypse,” writer Lorrie Moore asks, “Is a virus not a kind of zombie, a quasi-life-form moving in and out of inertness?” Is the virus the zombie or have all those quarantined at home become zombies? Moreover, scriptwriters can let their imagination run wild, using the rapid spread of Ebola or avian flu in the zombie genre (World War Z). The zombies then selectively choose to infect only healthy hosts but refrain from infecting the terminally ill. Brad Pitt’s own infection with Ebola virus protects him. Within the context of the story, this raises the preposterous prospect of protecting people by infecting them with some deadly but curable disease until the zombie epidemic abates. Another virus (simian virus ALZ-113) is used to exterminate the world’s population with very few survivors (Dawn of the Planet of the Apes, 2014). Epidemics of scavenging undead appear to have become an industry.

Nonetheless, movies have also offered serious depictions of yellow fever, cholera, and poliomyelitis epidemics. The AIDS epidemic, a most devastating epidemic with more than 30 million dead, particular in sub-Saharan Africa, is far from eradicated. AIDS has sadly struck close to home for many in the arts and has remained a source of inspiration to filmmakers. Films have shown the serious complications of the disease and recently how activists tried to change policy. The recent, celebrated 2017 film, 120 BPM (120 battements par minute), shows the struggles of an activist group in Paris. Their main objective was drug availability; the need for safety was the government’s and pharmaceutical industry’s push back.

Inventive scriptwriters have been inspired by the emergence of new diseases. Fear of the unknown, as well as the uncertainty of a threat we do not understand, remains a fantastic resource. Pandemics are serious, and initial disbelief (perhaps denial) is always rampant with many physicians trying to see the real danger beyond the histrionics. Thus, with our current pandemic, it may feel as if we are in a movie, and movies seem to mimic reality, although not quite.

Eelco Wijdicks is a professor of neurology at Mayo Clinic College of Medicine, Rochester, Minnesota, and an associate professor of the history of medicine. He has written on film in Neurology, JAMA Neurology, Neurology Today, The Lancet Neurology, and Mayo Clinic Proceedings. His book Neurocinema: When Film Meets Neurology was published in 2015.