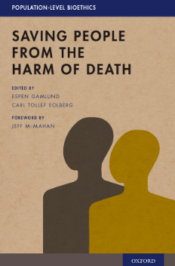 Saving People from the Harm of Death

We are currently faced with a global crisis. A virus has spread to all parts of our planet, and thousands of people have died from the coronavirus. Many people now fear that they are going to be sick and die. Fear of sickness can certainly be rational. It is more questionable whether fear of death is so. Death is something we mourn or fear as the worst thing that could happen. And yet being dead is something that no one can experience and live to describe.

There is the process of dying, the incident of death, and the condition of “being dead.” The process of dying is familiar to all those who have died after a period of sickness. The incident of death is undoubtedly a mystery. No one now alive has ever experienced death, and when we are dead, we are no longer around to talk about it. All we know is that one day, we are going to die. Most religions presuppose that life continues in one form or another after death, and many people chose to believe in such an afterlife. But for secular people, questions concerning death are just as pressing. What is death without a god and an afterlife? Should we fear the end of our lives?

There are two main responses to the question of fear of death. First, some people follow the ancient philosopher Epicurus in thinking that death is not bad for us and that we, therefore, should not fear death. Epicurus argued that death is not prudentially bad for us because “as long as we exist, death is not with us; but when death comes, then we do not exist.” And the ancient philosopher Lucretius later added that both sides of our lives are filled with non-existence. And since we do not fear the eternity before we were born, we have correspondingly little reason to fear death.

The second response is offered by the majority of contemporary philosophers working on death. They disagree with Epicurus and Lucretius. Instead, these philosophers believe that death is somehow bad for the individual who dies. According to the deprivation account of the badness of death, death is bad in virtue of depriving the individual of a future life worth having. Most notably, Thomas Nagel argued that death can be bad for those who die when and because it deprives them of the good life they would have had if they had continued to live. This usually means that death is worse, the earlier it occurs. That is to say, the death of younger individuals is considered worse than the death of older citizens. This line of thinking is also reflected in a willingness to prioritize saving young lives over old ones in times of scarcity, as well as how deaths are evaluated in global health today.

Irrespective of which response you favor, there remains a question of how we should relate to the prospects of our own death. What reason do we have to care about the fact that we are going to die? We would like to consider a certain view of the self that has implications for how we should think about death.

Many people believe that we cease to exist when we die. This belief usually means that the story of our lives ends with our death. This pessimistic thought may lead us to think that, when we die, we lose everything. We lose our friends, our family, memories, our past, our future, and we lose the world in which we find ourselves, for all eternity. In addition, the world loses us. Such thoughts may give rise to existential terror.

But there is a less pessimistic path available to secular people. That is to say, your past is equally true, independently of whether you are alive or dead. Moreover, it is not necessarily true that your death represents the end of your existence. It depends on what we mean by “existence”. We can think about the self in narrative terms, as a story that gradually unfolds from the onset of our existence and to our biological death. We can also imagine that the story does not have to end when we die, but instead continues to unfold until it slowly and gradually ends. Insofar as the story continues after our death, it is possible to think of this as an afterlife in secular terms. This is not a new state of existence but is rather the continuation of the self in various relevant ways.

This notion of a secular afterlife presupposes that our biological death is not the end of our existence. Moreover, it presupposes a particular view about personal identity, similar to the version developed by Derek Parfit in his Reasons and Persons (1984). According to Parfit, personal identity is not what matters, but rather the survival of certain psychological capacities like memory, preferences, and emotions. Such a view would be able to accommodate various intuitions we have about posthumous interests and the moral importance of how we talk about and treat dead people.

Espen Gamlund is a professor of philosophy at the University of Bergen, Norway. He specializes in moral philosophy and bioethics, and has published work on forgiveness, moral status of animals, death, and resource allocation in health. In addition, he has published on the philosophy of Baruch Spinoza. Gamlund also runs a philosophy blog (in Norwegian), and in 2015 he won The Faculty of Humanities' prize for his research dissemination.

Carl Tollef Solberg  is a senior research fellow at the Bergen Centre for Ethics and Priority Setting, at the University of Bergen. He specializes in bioethics and medical ethics and has published work on priority setting in health care, death, and medical ethics. Further, he has worked at several clinical levels of the health care system. Together with Gamlund, he has recently edited the anthology Saving People from the Harm of Death (2019, OUP).